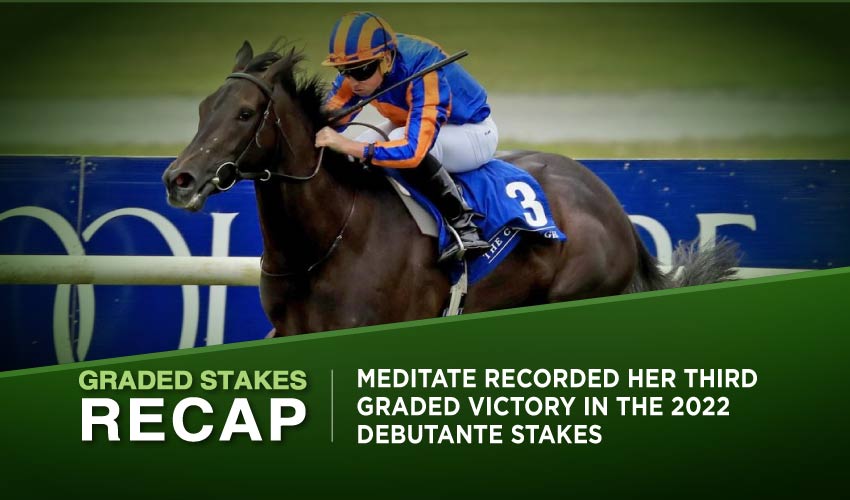 Aidan O’Brien and Ryan Moore enjoyed a highly successful Saturday at the Curragh Race Course, Ireland, especially when bagging both G2 turf races for two-year-olds on the card. At first, Aesop’s Fables overcame his greenness and showed a brilliant finish to score the Futurity Stakes over seven furlongs. Fillies covered the same distance in the 2022 Debutante Stakes, where Meditate recorded her third Graded victory and her odds to triumph in the 1000 Guineas 2023 were considerably cut in the answer.

Seven two-year-olds clashed in this G2 turf race over seven furlongs. The treasured feat for the juniors offered the purse of €120,000 and an emphatic victory of talented Aesop’s Fables (3-1). The son of No Nay Never galloped behind the leaders and sort of missed the moment when his stable mate Hans Anderson (5-2) bolted up to take command. It seemed that Aidan O’Brien would strike gold with his second chance; however, Ryan Moore managed to urge his mount to deliver a beautiful finish. Aesop’s Fables was closing on Hans Anderson with each of his powerful strides to pass him by easily in the end, scoring by two and ¼ of a length. Crossing the wire in 1m 23.45s, the smart colt left Hans Anderson in second, with favorite Proud And Regal (5-4) running home in third.

Although Aesop’s Fables looked very green in his victorious debut, it didn’t stop him from prevailing on Saturday, even from surprising the fans with his turn of foot and will to win. He seems to be a big star in the making, while second Hans Anderson also gave a fine effort in second. Proud And Regal was preferred as the only G3 winner in the field who looked mature enough to deliver. Still, the raw talent of the winner completely outshined him. He had to settle for third place.

Aidan O’Brien and Ryan Moore also celebrated victory in this G2 turf event for two-year-old fillies who covered the distance of seven furlongs. The purse of €120,000 attracted seven juniors, including unbeaten Meditate (8-13). After scoring two G3s, she was a favorite here and commenced the race as the leading chance by setting the pace. Under Ryan Moore, she willingly quickened up in the closing stages, and even though her rivals Olivia Maralda (9-2) – Thornbrook (12-1) threatened a bit in the final yards, Meditate secured a victory by ¾ of a length. The daughter of No Nay Never, who bagged a G2 double on Saturday, crossed in the wire in 1m 23.43s, leaving Olivia Maralda back in second, while Thornbrook finished third.

Meditate has always looked like a smart filly, which she proved in both her G3 triumphs, especially the one at the Royal Ascot meeting in the Albany Stakes. On Saturday, she was going for the victory from the beginning, but the challenging duo of rivals delivered a solid performance, too. Olivia Maralda pursued the favorite throughout the race, and even though she missed the point when Meditate kicked off, she managed to come up with a great finish. Together with third Thornbrook, they should be respected in their next outings.