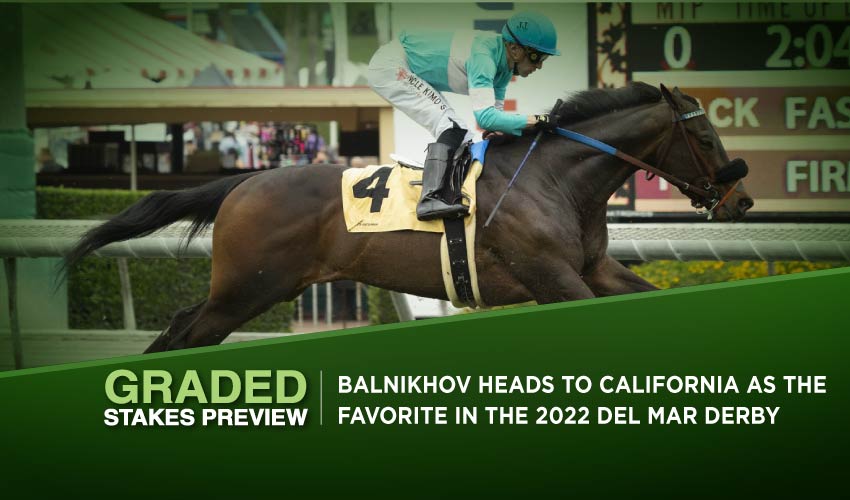 Yet another quality card awaits us this Saturday at Del Mar with three top quality races the 2022 Del Mar Derby, Del Mar Mile and Shared Belief Stakes all headlining the action. Here we preview everything you need to know.

The Del Mar Derby has been a fixture at Del Mar since 1945 and this year nine horses will be looking to add their names to the list of prestigious winners.

Likely to head the betting is Balnikhov. Balnikhov was campaigned in France for most of the early part of his career and has only had two runs in the US. He has never raced at Del Mar, but did show some serious potential when finishing as the runner up in the Grade 2 American Turf Stakes. A repeat of that performance will see him go very close.

Mackinnon is another who will go off at a very short price and it’s easy to see why. A third place finisher in last year’s Breeders’ Cup Juvenile Turf, Mackinnon has some of the very best form on offer. He has found things tougher since but did show some glimpses of promise when he finished a narrow runner up last time out.

Cabo Spirit certainly can’t be discounted. Trained by George Papaprodromou he has done the majority of his racing at Del Mar and heads into this contest in good form having won the Grade 3 La Jolla Handicap last time out. That was his first ever graded success and he will be looking to build on that here.

Another horse likely to give his running is Dandy Warhol. Arguably the least exposed horse in the race, Dandy Warhol has just had one run in the US since moving to trainer Mark Glatt, but that run did end up being successful. A winner of a claiming race at Del Mar just a few weeks ago, more will be needed but he could be the danger to all in the field.

This is a fascinating race with many horses in with a chance of victory. The smart play might be on backing Balnikhov. His performance in the American Turf Stakes was full of promise and he could be the one to beat.

At the time of writing and after several high profile withdrawals, just ten horses remain for this year’s Del Mar Mile. Raced over one mile, the pace up front is set to be fast and frenetic and there are several interesting angles.

Likely to head the betting will be Hong Kong Harry. A horse that has done most of his running in Europe, since moving Stateside and joining the Phil D’Amato barn Hong Kong Harry’s form has improved rapidly. A winner of a Grade 3 on his American debut, he backed that performance with a taking effort in the Grade 2 Eddie Read Stakes where he finished second. That was a fine effort which came over this course. If he can produce something similar he will have a great chance of winning this race.

Hot on the heels of Hong Kong Harry in the betting is Cathkin Peak.  Also trained by Phil D’Amato, Cathkin Peak finished just a place behind her stablemate in the Eddie Read and will be hoping to reverse that form here.

Rounding off the top three in the betting is Goliad. Trained by Richard Mandela, this is Goliad’s first effort in graded company and will be looking to build upon some fine listed level runs.

None Above The Law is a very interesting runner and could be the value play of the race. A lightly campaigned runner, None Above The Law is a former winner at this level. Since his win in 2021, things have been difficult but his 4th place finish in the Mathis Mile Stakes does offer encouragement. He could be one to watch at a price.

A danger to all the field and a horse that could be attractively priced is Tripoli. Highly tried, Tripoli has raced and won at the very highest level. His Grade 1 success came in the Pacific Classic and he beat some fine runners that day. Tripoli hasn’t ran up to his best this season but if he can get everything right he could be one to watch with real interest.

Hong Kong Harry is a horse that is improving all the time and he has offered much promise at this level. Having hit the crossbar last time out, we think he will be the one to beat.

The first stakes race on this Saturday’s Del Mar card comes in the form of the Shared Belief Stakes. Despite being a low-grade race and having a modest purse, this race has often proved to be a good proving ground for horses who have gone onto win some of the biggest races on the racing calendar.

Only five will compete in this year’s race and the betting is lead by the duo of Newgrange and Armagnac.

This will be Newgrange’s first run for trainer Tim Yakteen. Formerly with Bob Baffert, Newgrange has only had three career starts but has won two of these races in Grade 3 company. He takes a small step down in class here and is sure to go close.

Armagnac has gone the other way and will be having his first run for Bob Baffert having been formerly trained by Tim Yakteen. Unlike Newgrange, Armagnac hasn’t won at graded level but has been highly tried. He has run with credit at the very highest level and is sure to play a part in proceedings.

Rounding out the betting are the duo of Il Bellator and Go Joe Won. Both look to have a lot on their plate and it would cause an almighty shock if either won.