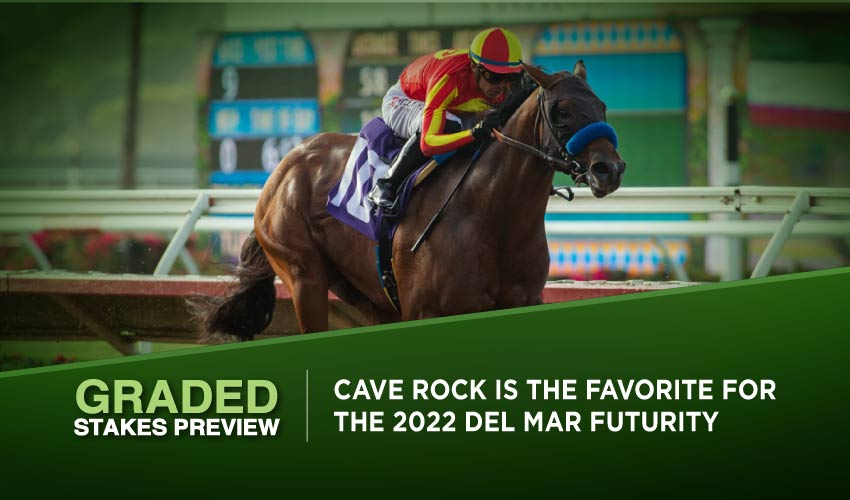 The final day of the superb Del Mar summer meet offers two juvenile Graded stakes of very different calibre. The G1 2022 Del Mar Futurity is a classy affair dominated as usual by Bob Baffert, who has the first three on the morning-line with Cave Rock, Havnameltdown and Newgate, while the G3 Juvenile Turf is a remarkably complicated contest in which almost all of the 14 runners have some sort of chance.

Bob Baffert’s dominance in Saturday’s Debutante has already been illustrated, but even that pales beside the trainer’s record in the Del Mar Futurity, the highlight of Sunday’s meet-closing card at the oceanside circuit. Baffert has won this race 15 times, including with future Kentucky Derby winners Silver Charm and American Pharoah, and dominates this year’s contest with the top three on the tote board.

The only one of his with stakes form is Havnameltdown (4-1), who added to his debut win here when going gate-to-wire in the G3 Best Pal here over six furlongs last month, drawing two and a half lengths clear of Santa Anita maiden winner Agency (12-1) for a comfortable success, with Pop D’Oro (50-1) a never-nearer fourth, seven lengths further back.

Further improvement is highly likely, although his barnmates will be stepping up on their impressive debut victories too. Cave Rock (6-5) – in the same ownership as Havnameltdown – also led every step of the way here over six and a half furlongs on debut, clearing right away under little urging to win by six lengths, running a big number in the process. Meet-leading jockey Juan Hernandez retains the ride today; he also rode Havnameltdown in the Best Pal and could presumably take his pick.

Then there’s Newgate (4-1), who pressed the pace here on debut over five and a half furlongs before taking over and rolling away to win by three and a half lengths in a fast time. Any of the three could come to the fore today and the pace will be important, as Baffert’s jockeys will not want to set up a potentially disastrous speed duel.

Making a case for any of the others is difficult. The only other stakes-winner in the field is The Big Wam (10-1), the most experienced of these, two-for-four after landing a state-bred stakes here over five and a half furlongs.

This will require much more, while Classical Cat (8-1) got the job done over the same course and distance on debut, two and a half lengths clear in a good time, looking a promising sort. Agency did all his best work late when winning on debut, but has a big deficit to make up with Havnameltdown on Best Pal running.

Doug O’Neill won this in 2015 with another future Kentucky Derby winner in Nyquist and saddles Mixto (20-1), fourth at boxcar odds on debut here just a week ago and unlikely to get into the mix today. That remark also applies to Skinner (8-1), fifth behind Havnameltdown when both horses were making their debut, beaten seven lengths.

One of Baffert’s three, but which one? There has been a lot of talk about CAVE ROCK and he can build on his wide-margin debut victory.

This is the sort of race that bettors fear – a full field of inexperienced horses all progressing (or not) at different rates, hardly any form to go on and a morning-line that helps a little but not enough. The Del Mar Juvenile Turf is a real head-scratcher.

After all, the morning-line favorite is a British import who has never won a race. Dandy Man Shines (4-1) was a 40-1 poke when running on too late to make a difference in the G2 Vintage at Goodwood in July, beaten four and three-quarter lengths into fourth. The third horse has since won a G3 at Deauville and the winner Marbaan may give a clue when he runs in the G1 National at the Curragh on Sunday.

His barnmate Packs A Wahlop (8-1) was a good winner here over five furlongs last month on his turf debut, a length and a half clear at the line, but it’s hard to know how he’ll cope going almost twice as far today. That goes too for Wound Up (12-1), winner of a five-furlong maiden here on debut, going gate-to-wire to get the dollars by a neck.

The lack of clarity about this race is illustrated further by Irish import Ti Sento (6-1), who won his maiden at tiny Listowel – better known as a jumping track – at odds of 100-1 before finishing an outclassed 16th of 17 in the six-furlong G2 Coventry at Royal Ascot. There’s nothing here to cling to, yet he’s the fourth-choice.

At current odds Syntactic is the least likely of Doug O’Neill’s trio, behind barnmate Ah Jeez (8-1), who showed plenty of promise when winning a five-furlong maiden here by three and a quarter lengths, and Tahoma (8-1), runner-up in a five-furlong stakes on the main track at Santa Anita and now on the lawn for the first time, three furlongs further, from a wide, wide post. How Tahoma copes with these three variables is anyone’s guess.

The maidens De La Luna (12-1) and Park City (5-1) ran two-three, separated by a length, over course and distance last month, and considering that De La Luna was a 45-1 longshot and Park City was an odds-on favourite, it’s plausible that the latter – runner-up to a future stakes-winner on his debut – may flip the form this time.

Mas Rapido (15-1) lived up to his name on debut when getting home by a neck over six furlongs at Hamilton, in Scotland, but the value of that form simply adds another layer of uncertainty to what is an incredibly tricky contest.

Small stakes only. Course-and-distance winner DON’TTHINKJUSTDOIT is a known quantity compared with several here and is a tentative choice.