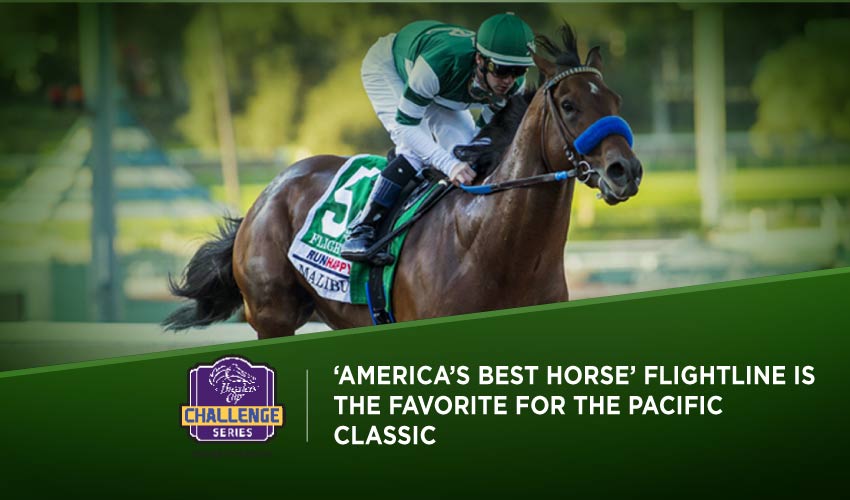 This is the one we’ve been waiting for. The unbeaten, unchallenged, unearthly Flightline returns to action in the G1 Pacific Classic at Del Mar on Saturday, with the burning question of whether he can stretch out his brilliance to ten furlongs against G1 winners Country Grammer and Express Train. The supporting 2022 Del Mar Handicap is a very competitive contest featuring last year’s runner-up Master Piece and a four-strong entry from Phil D’Amato.

The turf route division in California is not particularly strong and although there’s a big field for the 2022 Del Mar Handicap – a win-and-in for the Breeders’ Cup Turf – there isn’t a huge amount of quality, with the same horses frequently in opposition.

Four of today’s field have come on from the G3 Cougar II here on dirt over a mile and a half in July, a race won by Heywoods Beach, who stalked the pace and finished solidly and beat front-running Tizamagician by a length, with Order And Law beaten three lengths into fourth and Dicey Mo Chara fifth, almost eight lengths further back.

They all come back to the lawn now, with the usual query over that move. It was just the second start after a long break for Heywoods Beach and there could be more to come, and that also goes for Tizamagician, last year’s Pacific Classic runner-up who was coming off a nearly nine-month layoff and has an excellent record here, although only on the main track.

Three more were last seen in the G2 Eddie Read here over a mile-eighth, won in dominant fashion by longshot Master Piece, an ex-Chilean runner who was making his Graded-stakes breakthrough in the US, with Masteroffoxhounds fifth, four and a quarter lengths away, and Tango Tango Tango another length and three-quarters back in seventh.

Twelve months ago Master Piece had been a gutsy, late-closing runner-up in this race, falling short by just a half-length, with the veteran Red King and Masteroffoxhounds in behind, and that Eddie Read score should set him up nicely for another try.

Masteroffoxhounds, on an eight-race losing streak, and Red King, who has won just once in 13 starts since taking this race in 2020, are half of a Phil D’Amato quartet as the trainer bids for a record-equalling seventh success in the race. His other, lesser, contenders are the lightly raced Gold Phoenix and Gregdar, third and fourth in the G2 Charles Whittingham at Santa Anita in April, in which Masteroffoxhounds was runner-up and Dicey Mo Chara fifth.

The field is completed by Tesoro, who is zero-for-six in stakes and looks outclassed against some seasoned, talented rivals.

Prediction  Plenty in with a chance in a tricky contest, but last year’s runner-up MASTER PIECE is suited by course and distance and can go one better now.

There are six runners in Saturday’s Pacific Classic, the highlight of Del Mar’s summer meeting and a win-and-in for the Breeders’ Cup Classic, but it’s really all about one horse. It’s really all about Flightline (1-5), the current holder of the title ‘best horse in America’.

And it’s really all about one question – can the unbeaten four-year-old, majestically dominant in each of his four starts, stretch out to ten furlongs with his brilliance intact? Everything he has done suggests that he has little to fear from today’s rivals, but if he doesn’t see out those unknown two furlongs then he won’t win, massive Beyer figure, massive reputation notwithstanding.

He has done everything in his career with great ease, usually on the lead, and his demeanor and pedigree suggest he’ll stay the distance. He has never been under pressure in his life, has won those four races by an aggregate of 43 and a half lengths, and has already won at this circuit. Post five is positive, giving him room for maneuver from the gate, and although the rabbit runner Extra Hope (30-1) has quite legitimately been put in to hassle him for the lead it shouldn’t matter – Flightline can rate in behind, and Extra Hope doesn’t have the class to stay ahead all the way around in any case.

Flightline won the G1 Metropolitan Handicap at Belmont Park in a six-length canter on his first try at a mile, and the strong likelihood is that he’ll stretch out and win, although his odds aren’t tempting.

Aside from the extra yardage, his secondary threat is probably G1 Dubai World Cup winner Country Grammer (4-1), who made the most of another superstar’s stamina issues when Life Is Good ran out of gas in the last furlong at Meydan. He also won last year’s G1 Hollywood Gold Cup at this distance and will appreciate the step back up after going under by two and a quarter lengths to Royal Ship (8-1) in the G2 San Diego here over a mile-sixteenth. Conversely, the longer distance won’t help the in-form Royal Ship, who was seventh in a weaker renewal of this race 12 months ago and has hit the board but never won at a mile and a quarter.

Third in the San Diego was the frustrating Stilleto Boy (20-1), beaten six and a half lengths. Flightline ran him ragged in the G1 Malibu over seven furlongs at Santa Anita and there’s no doubt Stilleto Boy is better at today’s distance, but he’s one-for-nine over the last 12 months, and that ‘one’ came when he led all the way in the G2 Californian at Santa Anita, a tactic that is unlikely to be emulated today.

Runner-up in the Californian was Express Train (12-1), whose own stamina for this distance was in doubt until he made his G1 breakthrough in the Santa Anita Handicap in March, with Stilleto Boy third. However, he was only sixth in this race last year and is more at home in G2 company, although his three-for-five record at this track earns him respect.

Prediction  All eyes are on the freakish FLIGHTLINE, who will almost certainly win if seeing out the distance on his first try at a mile and a quarter.

Stay tuned for the latest Breeders’ Cup Odds and Horse Racing Results. Don’t forget to Sign-up and get up to a 10% horse rebate. Terms & Conditions here!