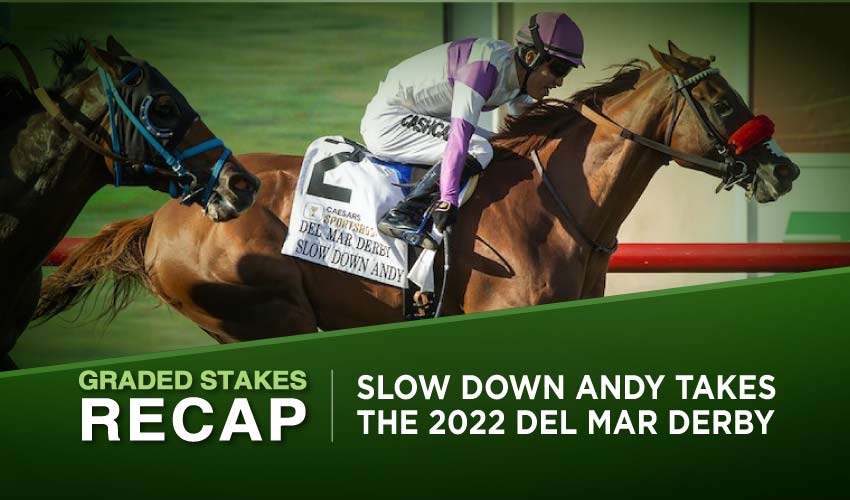 Three stakes races headlined the action from Del Mar this past Saturday, the 2022 Del Mar Mile, Del Mar Derby, and Shared Belief Stakes. Here is everything that happened.

The headline race of Del Mar this past Saturday was the Del Mar Derby. Nine horses cantered down to post with the Phil D’Amato trained Balnikhov the clear favorite for the race.

In what was an open looking contest. It was Slow Down Andy that broke smartly and took up the early lead. Able to dictate the early fractions, Slow Down Andy led as the runners hit the home turn.

It looked like his lead would be gobbled up, but remarkably Slow Down Andy kept on finding and finding. Spycatcher and War At Sea both moved within half a length and looked certain to go past but Slow Down Andy wouldn’t be for passing and would go onto win the biggest win of his fledgling career.

Nine horses lined up to take their chance in this year’s Del Mar Mile. The betting was led by the Phil D’Amato trained Hong Kong Harry who was looking to win his first ever graded contest.

In this one-mile contest it was the Richard Mandella trained Goliad who shot out of the starting gates like a cannon and quickly established an eight length lead over the rest of the field. His nearest challenger was Air Force Rest and as the horses rounded the final turn it was these two who looked set to battle it out.

Chasing Hong Kong Harry all the way to the line was Irideo and Cathkin Peak but neither had the class to eat into Hong Kong Harry’s lead and would have to settle for second and third respectively.

Despite not being a Stakes race, the Shared Belief Stakes has proved a valuable stepping stone for horses wanting to go on and achieve bigger and better things in their careers. This race was won last season by Medina Spirit who was the 2021 Kentucky Derby winner.

This year’s renewal quickly became a match between the favorite High Connection and outsider of the field Go Joe Won. With the two streets clear of the rest of the field, the two matched strides as they rounded the home turn.

Having the rail to guide him, Go Joe Won kept finding for pressure, and despite looking like High Connection would eventually get past him, he gamely fought of the pressure and would go onto win courtesy of a photo finish.