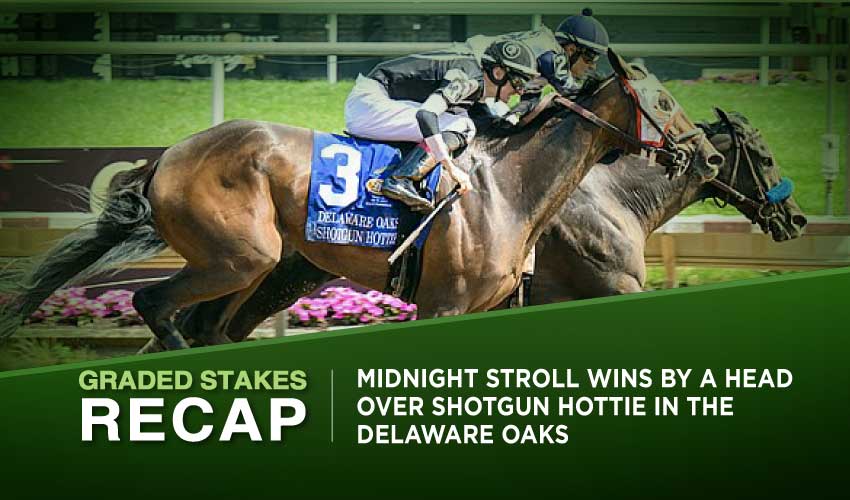 On Saturday, the Delaware Park offered a couple of G3 races open to three-year-old horses. At first, fillies lined up for the 2022 Delaware Oaks, where Midnight Stroll prevailed in a thrilling finish over Shotgun Hottie, upon which Main Event was the decisive winner of the Kent Stakes.

The G3 event was open only to three-year-old fillies who covered the distance of a mile and a half of a furlong. Vying for the purse of $300,000, seven participants clash on the dirt surface, while the leading chance seemed to be Shotgun Hottie (5-2), placed at the G3 scene.

Still, it was Midnight Stroll (13-5) who caught the eye the most as after galloping in the field; she made such a powerful move in the final turn that she swiftly took second place. In the final stretch, Eric Cancel nudged her once more, and Midnight Stroll seized the front, yet Shotgun Hottie was already closing on her. Ultimately, these two fillies fought bravely for the win, with Midnight Stroll prevailing by a head in 1m 44.31s. Morning Matcha (24-10) ran in third.

The victorious bay trained by John P. Terranova II entered the Delaware Oaks with five starts under her belt, including a black-type win. However, she utterly failed to make an impact among the G2 company last time out, so she wasn’t expected to land the spoils on Saturday but was respected.

The daughter of Not This Time delivered a bold run, though, and thanks to a brilliant ride by Eric Cancel, she used up the slight weight advantage over Shotgun Hottie to score her premiere Grade victory. Four lengths back, Morning Matcha snatched up the third place after running in the last place.

Another G3 race of Saturday card was held at the distance of a mile and a furlong while being meant only for three-year-olds who fought for the purse of $200,000. On the turf surface, Main Event (43-10) was the former leading chance of the event, but under the jockey of the weekend, Eric Cancel, the son of Bernardini recorded his first Graded victory.

The George Weaver trained bay seemed very keen since the beginning, so he set the pace and led the field even into the final stretch, where he easily drew clear from his rivals. In the end, Main Event cruised home in 1m 48.74s, bettering second Elizar (8-5) by one and ½ of a length. The second colt was closing on the victor but couldn’t keep up with him, bettering only third Tommy Bee (47-10).

Main Event has basically the same profile as Midnight Stroll in the Delaware Oaks. He entered the Kent Stakes as a black-type winner who didn’t fire at all when faced with fiercer opponents at the G2 stage. However, in Saturday’s company, Main Event managed to shine together with his jockey, Eric Cancel, who scored both G3 races of the card.

Still, Elizar also earned some respect as his premiere start in the US was lacklustre after he was transported from France. On Saturday, he suggested being a decent Graded horse on the turf surface, while we’re really interested in what the talented colt could be capable of. Third Tommy Bee flew from last place to third and also ran a good race.

Stay tuned for the latest Breeders’ Cup Odds. Check out the World’s major Racetrack entries and don’t forget to Sign-up and get up to a 10% horse rebate. We offer the best promotions!