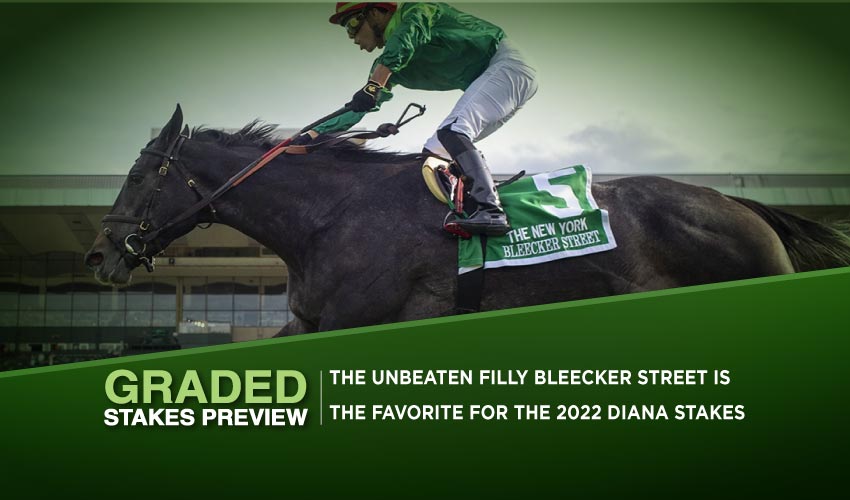 Defending Saratoga champion Chad Brown looks to have a lock on Saturday’s feature at the Spa, running two-thirds of the field in the G1 2022 Diana Stakes including the unbeaten filly Bleecker Street, who bids for a straight eight. The undercard is led by the G3 Sanford, an important early test for two-year-old colts.

Chad Brown has won the Diana a record six times and is keenly focused on number seven, sending out four of the six runners in Saturday’s main event at Saratoga.

Brown’s main contender is the remarkable Bleecker Street, unbeaten in seven and a G1 winner last time out when charging from last to first to take the ten-furlong New York at Belmont Park, with barnmate Rougir favoured but running as flat as a pancake in fifth.

Bleecker Street may still have more to give but so does Rougir, a G1 winner in her native France and an easy winner of the G3 Beaugay on her previous start.

They will have the race set fair for them by speed-favouring barnmates In Italian, who helped set a blistering pace in the G1 Just A Game at Belmont before fading to third, and Technical Analysis, twice successful here last summer and coming off an easy score in the G3 Gallorette at Pimlico. Both have the class to stay in front, but their tactics will assist their late-running stablemates.

British raider Creative Flair was third in last year’s G3 Saratoga Oaks and comes off victory in a low-rent G2 at Meydan in February. Her trainer won last year’s Diana but she needs a career-best to even hit the board.

It’s hard to desert Bleecker Street, but G1 winner ROUGIR is much better than she showed last time and it’s worth trusting her to bounce back.

The first three fillies home in Thursday’s Schuylerville all had big-track form, so that important factor is also likely to apply in the Sanford, the equivalent race for two-year-old colts.

Todd Pletcher has won the Sanford a record eight times and has two in the gate, with lead contender Forte winning eased-down by seven and three-quarter lengths at Belmont Park over five furlongs, and thus having an edge in big-track experience over barnmate Major Dude, who broke his maiden in style over the same distance at Monmouth Park.

That top-tier advantage also goes for Churchill Downs debut winner Curly Jack, who won by four lengths over five and a half furlongs and hails from the Tom Amoss barn in sizzling form with its two-year-olds, and Andiamo A Firenze – a half-brother to crack sprinter Firenze Fire, the Sanford winner of 2017 – who won by the same margin over the same distance at Belmont. Valenzan Day has been more highly tried after running third in a stakes at Belmont Park last month.

The combination of big-track form and his Sanford-specialist trainer points to FORTE, whose wide-margin maiden victory hinted at considerable potential.