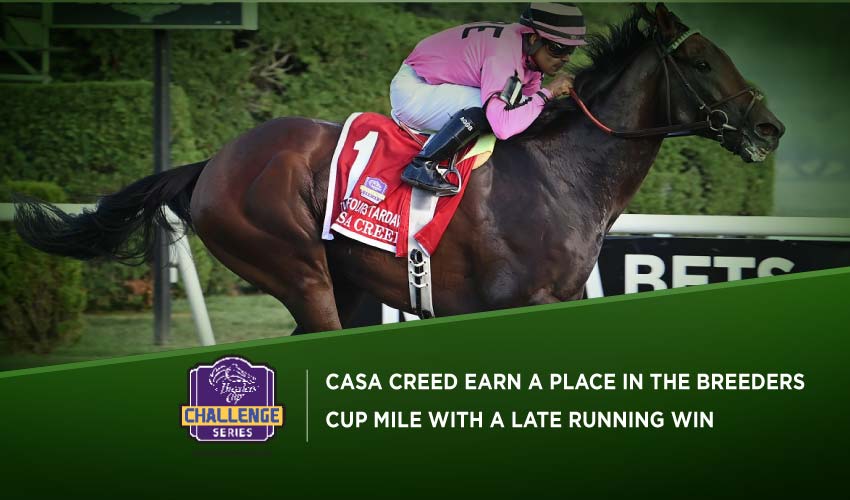 If at first, you don’t succeed, try, try again. So it goes for Casa Creed, who finished fast and late to win the G1 Fourstardave, the main event at Saratoga on Saturday, after running third in the race in 2020 and 2021. On the other hand, it was the first time lucky for trainer Michelle Lovell, who sent out Damon’s Mound – her first runner at the Spa – to win the G2 Saratoga Special.

The third time is indeed the charm. Casa Creed was taking his third swing at the Fourstardave, the highlight of Saturday afternoon at Saratoga Race course, and this time was the right time.

The six-year-old is not a natural miler, tending to show his best at sprint trips, but the 4-1 shot looked the perfect fit for this distance when coming from last to first in the hands of Luis Saez.

Casa Creed ran his four rivals down inside the final sixteenth and won going away by a length and a half, stopping the clock in 1:34 and one-fifth.

Odds-on favorite Regal Glory, the only mare in the field, gave up her four-race winning streak but held on to the place spot by a half-length from her barn mate Masen.

“He’s run good races at a mile before and got good speed figures, and today he got his picture taken,” said trainer Bill Mott. “Six to seven furlongs is probably his best distance, he’s somewhere in between a sprinter and a miler.”

That now poses a pleasant dilemma for Mott as Casa Creed is doubly qualified for the Breeders’ Cup at Keeneland, with this victory giving him a free berth into the Mile and his previous success in the six-furlong G1 Jaipur providing win-and-in status for the Turf Sprint over five and a half furlongs.

A star may have been born in the Saratoga Special, as Damon’s Mound maintained his unbeaten record when strolling to an impressive success as the 9-5 second-choice.

The colt had won his maiden by 12 and a half lengths and this was much less explosive but much more impressive.

Damon’s Mound made a looping move from last place around the turn and was soon in front, then powered clear under Gabriel Saez to land the spoils by three and a quarter lengths in a tick under 1:18.

Odds-on favorite Gulfport was checked on the turn and lost his chance, although he rallied gamely to finish second, seven-length clear of Super Chow.

The victory was a personal triumph for trainer Michelle Lovell, who had never had a runner at Saratoga before and may well have another one soon as her stable star could return for the seven-furlong G1 Hopeful on September 5, closing day at the Spa. Another alternative is the G3 Iroquois, over a mile-sixteenth, at Churchill Downs on September 17.

“I knew he’d run his race, I was pretty sure he’d step forward, he’d done everything perfectly, there would be no reason for regression,” said Lovell. “I’m just so proud of him.”