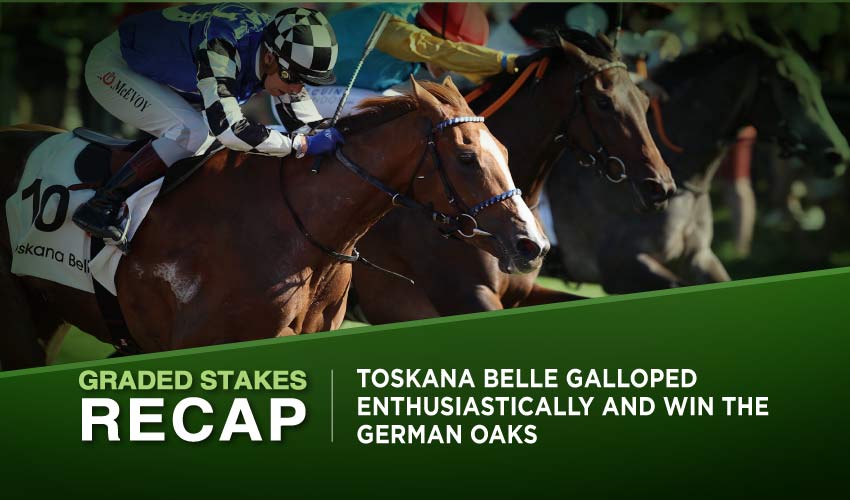 On Sunday, a pair of G1s were held over the European courses. Three-year-old and older horses lined up for the Prix de Maurice de Gheest at Deauville, France, where five-year-old mare Highfield Princess cemented herself as a highly promising sprinter, leaving the rest of the field behind with ease. Toskana Belle then scored the 2022 German Oaks in Düsseldorf while ridden by Kerrin McEvoy, an Australian star jockey who won the Melbourne Cup three times.

Fourteen sprinters lined up for this G1 race to fight for the purse of €380,000. On the turf surface, the participants covered the distance of six and a half furlongs, and it was five-year-old mare Highfield Princess (163-10) who handled it the best.

The progressive John Quinn trainee had a great start, was prominent throughout, and when jockey Jason Hart urged her to quicken up, the mare did so enthusiastically.

Highfield Princess took command and cruised home towards her premiere G1 success in 1m 15.30s, leaving her rivals behind at least by ¾ of a length.

From the bunch of contestants fighting for the places, Minzaal (12-1) affirmed to be an aspiring elite sprinter as he took second ahead of Garrus (19-1).

Five-year-old Highfield Princess has already recorded 28 outings; however, the daughter of Night of Thunder is only now revealing her fur potential.

Until 2022, a Listed triumph was her maximum, while in the ongoing season, the bay achieved a G2 win in York, and even though she finished only sixth in the G1 Platinum Jubilee Stakes, she entirely made amends on Sunday.

Her performance was just superb, with Minzaal being the best of the rest. Garrus used his current form to the fullest, while fourth Rohaan (22-1) and fifth Naval Crown (18-5) completed the absolute triumph of British sprinters here. Australian Artorius (6-1) was sixth.

The G1 turf race was open to three-year-old fillies who competed for the purse of €500,000 at a distance of a mile and three furlongs. It lured in several accomplished participants; however, none of the preferred ones managed to better Toskana Belle (162-10), trained by Andreas Wöhler.

The chestnut filly seized the front right away, and under Kerrin McEvoy, she galloped enthusiastically throughout the whole race.

The daughter of Shamalgan remained first until the final stretch, where her rivals tried to close on her somewhat successfully, but the wire came in time for Toskana Belle as she scored the Classic race in 2m 11.21s. Finishing Wagnis (57-10) missed her just by a nose, with third Mylady (107-10) coming home in third.

The successful filly aimed at the German Oaks with a Listed triumph under her belt, while last time out, Toskana Belle finished third in a trial.

However, her jockey simply set the best pace for her, and the chestnut managed to sustain it until the very end. Trainer Markus Klug must’ve been quite desperate in the closing stage as three of his trainees were closing on the leader, yet all of them had to settle for places – Wagnis was second, Mylady third, and Mountaha (26-5) fourth.

The victress of the Italian Oaks, Nachtrose (16-5), was fifth, while the Aidan O’Brien Toy (29-10) showed nothing of interest when coming home in seventh.

Follow us on Social Media for more 2022 German Oaks updates!