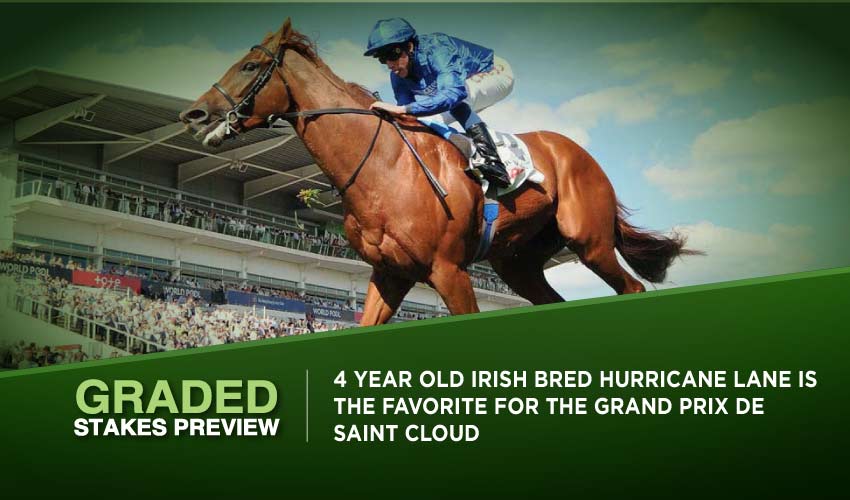 Sunday card at the France track in Saint-Cloud offers a treasured G1 turf race – the Grand Prix de Saint-Cloud where four-year-old Hurricane Lane will attempt to forget his seasonal debut and return to winning ways. Alpinista and Mare Australis are the other big players here.

The prestigious G1 turf race is held at a distance of a mile and a half and is open to four-year-old and older horses who will vie for the purse of €400,000. The leading victory candidate seems to be four-year-old Hurricane Lane and he is preferred despite his lacklustre seasonal debut.

After all, the Charlie Appleby bound colt has been a star for the connections in 2021, given he won five out of his seven outings, including the G1 Irish Derby, Grand Prix de Paris, and St Leger. Having proven he’s an outstanding stayer, he cemented the statement by finishing third in the Epsom Derby and Prix de l’Arc de Triomphe, where he could’ve recorded even a better result.

Yet, he didn’t have an entirely peaceful gallop back then. When looking back at Hurricane Lane’s achievements, he simply had to be the favorite of the G2 Hardwick Stakes at the Royal Ascot meeting. However, the handsome chestnut couldn’t deliver a finish he is used to seeing him sporting and had to settle for third place.

He seemed a bit stiff in the closing stages, and therefore, he needed the run to freshen up in order to return to his best on the second start of the season. By far, he has achieved more than his Sunday rivals; still, he needs to travel to France in an almost peak form to score the Grand Prix de Saint-Cloud.

Regarding other British raiders aiming at France, Third Realm looked good for his start at the Royal Ascot, yet scratched in the end, and we’ll see whether he can draw on his impressive Listed victory from May here.

He’s not a win contender but could snatch up a good place. Alpinista is an exciting mare in the field, given she remained unbeaten in the 2021 season. The grey mare was pointed at the German tracks where she scored three G1 events, including the Grosser Preis von Baden in front of Torquator Tasso, the subsequent Prix de l’Arc de Triomphe victor. She’s about to hit the track for the first time in 2022, but she is definitely respected for putting on a spirited performance.

Aidan O’Brien relies here on High Definition, who has been waiting for a win since his two-year-old campaign, and even though it doesn’t seem like he’s about to break the duck on Sunday, he should place.

After all, he ran in second in the G1 Tattersall Gold Cup, and he could record a fine result when employing the front-running tactic again; however, it won’t be easy for him to lead as Mare Australia likes to set the pace, too. The five-year-old chestnut is the local leading chance after scoring the G2 Prix de Chantilly last time out. Still, his form doesn’t look as strong as in 2021 when he bagged the G1 Prix Ganay.