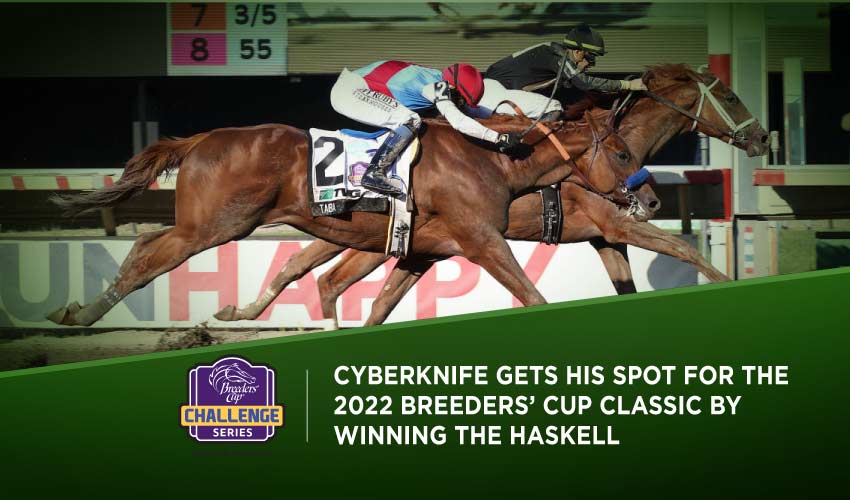 Cyberknife cuts through the noise

When there are two main contenders for a big race, it often happens that a relatively unconsidered rival comes through to upset expectations, and Cyberknife played that role to perfection in the Haskell, the biggest race of the year at Monmouth Park, on Saturday afternoon.

All the talk beforehand was of unbeaten odds-on favorite Jack Christopher and second-choice Taiba, but Cyberknife has been coming to the boil for a while now and the 7-1 chance ran a career-best, breaking the track record into the bargain. Jack Christopher led them into the stretch but ran out of gas inside the final furlong, and as he faded Cyberknife – who got a dream run up the rail under Florent Geroux – and Taiba surged for the line, with only a head separating them when the camera clicked. Jack Christopher was two lengths back in third, and the new track best is now 1:46.24.

“He’s getting better, he stepped up here, proved he’s a true Grade 1 horse,” said trainer Brad Cox. “He just needs something to run at, it makes all the difference for him.”

The Haskell is win-and-in for the Breeders’ Cup Classic, and Cyberknife is now a prominent candidate for the November championships. It was the second G1 score for the son of Gun Runner following his triumph in the Arkansas Derby and banished the memories of his total eclipse in the Kentucky Derby.

He is now a likely starter in the $1.25m G1 Travers over ten furlongs at Saratoga on August 27, while the non-staying Jack Christopher will be in action on the same card when he cuts back to seven furlongs in the G1 Allen Jerkens Memorial.

The Haskell defeat of Jack Christopher was the only blemish on an otherwise perfect day for Chad Brown, who swept the other four Graded stakes on the card with Flavien Prat in the saddle each time.

Brown’s biggest victory came in the United Nations courtesy of Adhamo, who recorded his first victory in the US and ended a long losing run as 9-5 favorite. He came running through the stretch, putting away his pace-setting barnmate Tribhuvan at the sixteenth pole to win going away by a length and a half, stopping the clock in 2:12 and three-fifths. The longshot Epic Bromance kept on well to grab the silver medal by a head from Temple, with the gallant Tribhuvan pushed off the board in the last jump.

“We finally got this horse a Grade 1 win,” said Brown. “He’s a work in progress and we’re still trying to figure out his best distance, but there’s no doubt he’s a pretty talented horse.”

The next stop for Adhamo may well be the G1 Sword Dancer over a mile and a half at Saratoga on August 27, a race that is also the target for last year’s Breeders’ Cup Turf winner Yibir.

Before the gates opened the Molly Pitcher looked like an easy ride for the 3-5 favorite Search Results, and that’s just how it worked out in the race.

The daughter of Flatter has never been off the board in her life and took full advantage of this class relief when going to the lead at the quarter pole and drawing off to win by three lengths from outsider Leader Of The Band. Army Wife was a length and three-quarters further back in third; the time was 1:40 and one-half.

“She’s really push-button. She has some great speed out of the gate but she can rate too, as we all saw today,” said jockey Flavien Prat.

Search Results, whose resume includes victory in the G1 Acorn and second place in the G1 Kentucky Oaks, will now be pointed towards the $2m Breeders’ Cup Distaff over a mile-eighth at Keeneland on November 5th.

Lemista got the job done

Chad Brown had three chances in the Matchmaker and it was his second-string Lemista who got the job done, winning for the first time since moving over from Ireland early last year.

Her barnmate Flighty Lady towed the field along until Lemista moved through to take up the baton, and the 9-2 shot was courage personified in the stretch, turning back the persistent challenge of her other barnmate Fluffy Socks to win by a half-length, with Vigilantes Way a rallying third, a neck adrift. The stopwatch showed 1:47 and change.

“She doesn’t have a great turn of foot, she’s never going to circle the field,” said Brown. “But she had good track position today and could use her strength.”

The next target for Lemista and Fluffy Socks is potentially the G2 Ballston Spa over a mile-sixteenth at Saratoga on August 27.

Brown and Prat began their domination of the Monmouth undercard with the comfortable success of Highly Motivated in the Monmouth Cup.

The Into Mischief colt was well fancied for last year’s Kentucky Derby before finishing tenth but seems to be returning to his peak judging by this thoroughly competent performance.

The 4-5 favorite swept to the lead off the turn and kept on rolling, stretching his advantage over barnmate Pipeline to a length and three-quarters at the wire, stopping the clock in what was – before Cyberknife topped it later in the day – a new track record of 1:46.53. Informative took third, two and a quarter lengths further back.

“When I asked him to go, he really responded,” said Prat. “Every race this year he has stepped up a little more, and this was another move up.”