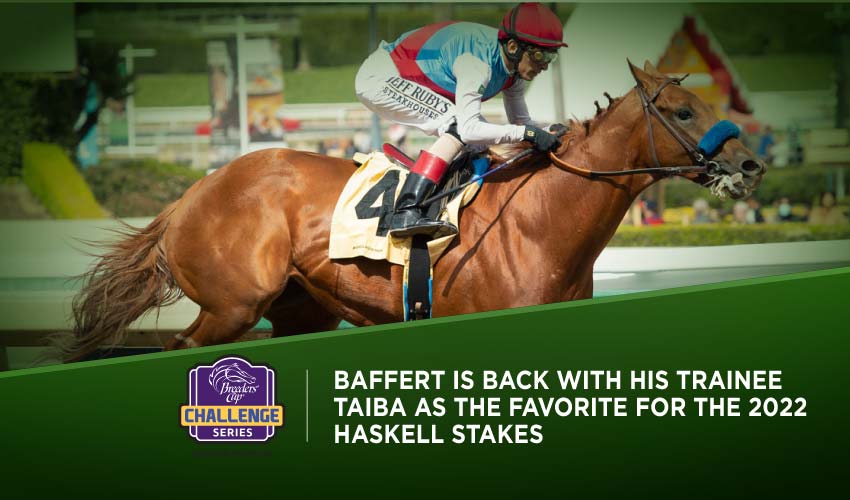 The G1 2022 Haskell Stakes at Monmouth Park on Saturday is the highlight of the entire weekend, bringing together four G1 winners – Taiba, Jack Christopher, White Abarrio and Cyberknife – as the three-year-old colt division begins to take shape for the summer.

The big-name three-year-old colts are now beginning their summer campaigns, and as usual the million-dollar Haskell – the biggest race of the year at Monmouth Park, and a win-and-in for the Breeders’ Cup Classic – spotlights a couple of major players.

Bob Baffert is back on the big-race beat after completing a 90-day suspension and is bidding for a record tenth win in this race with Taiba, who like many good horses – including two of today’s rivals – got buried under the killing early pace in the Kentucky Derby and failed to give his best.

His earlier victory in the G1 Santa Anita Derby showed plenty of class, but what did he beat? Not much. The talent pool in California is pretty shallow, and even though Taiba might be the biggest fish out west he still has plenty to prove today.

He stays the mile-eighth, though, which is a plus point against the unbeaten Jack Christopher, who stretches out from a mile and goes two turns for the first time. He’s four-for-four, including the G1 Champagne at Belmont Park last year and the seven-furlong G1 Woody Stephens at the same track last time out, when he drew right off to beat second-division rivals by ten lengths.

The pace set-up should suit him, as his sprint-mile speed could allow him to control the fractions. If he sees out the distance he’ll be very hard to beat.

Derby blowout Cyberknife, previously winner of a soft-looking G1 Arkansas Derby, rebounded to winning form in the mile-sixteenth G3 Matt Winn at Churchill Downs when he chased Howling Time all the way around the track before nailing him on the line to win by a nose.

That was arguably a career-best for both horses, certainly for Howling Time, who has run all his best races at Churchill Downs and may not fare so well in New Jersey. Cyberknife is entitled to move up from that and should again have plenty of pace to run at, but he’ll need another career-best.

Similarly to Howling Time, G1 Florida Derby winner White Abarrio is a one-track wonder with all his wins coming at Gulfstream Park. He was another Derby flop but bounced back when runner-up in the G3 Ohio Derby at Thistledown and that form looks better after recent victories for the third and fourth horses. He needs more here but there may be more to come, and his stalking tactics could be an effective play.

One Time Willard, King Of Hollywood and Benevengo seem to have got lost on their way to a suitable race and wound up here; they have practically no chance.

Prediction  The extra furlong is a query for dual G1 winner JACK CHRISTOPHER, but his speed, class, and scope for further improvement make him impossible to oppose.