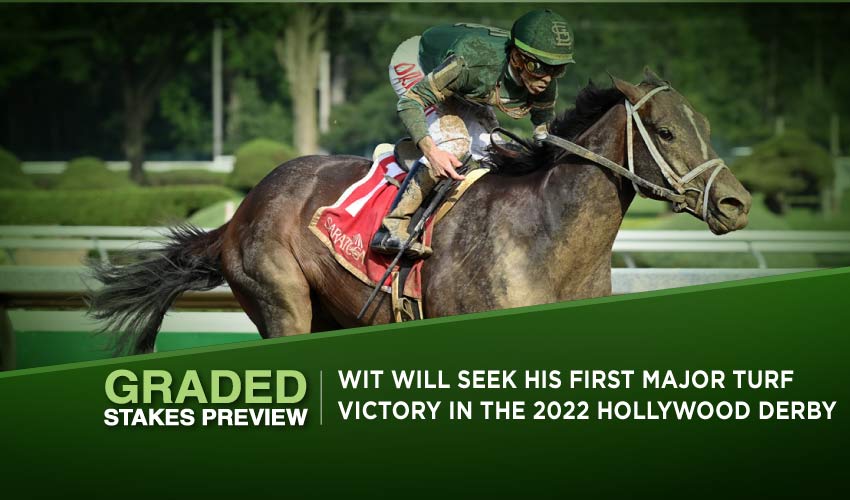 Eleven runners go to the gate for the G1 2022 Hollywood Derby on Saturday at Del Mar. The race was first run in 1938 so is an established race, although it only attained Grade 1 status in 1973.

In 2014, California Chrome accomplished a rare feat when, having won the Santa Anita Derby, Kentucky Derby and Preakness Stakes on dirt earlier in the year, he won the Hollywood Derby in his first appearance on the turf.

To this year’s renewal, and this is a very open graded stakes here and the early morning line favorite is Wit from the Todd Pletcher barn and that looks about right on the balance of form in this race. The son of Practical Joke has had nine career starts with a record of 9-4-3-1.

Only off the board once and that was in the Grade 1 Woody Stephen’s when behind Jack Christopher and Pappacap. His recent form is strong having hit the board in a Grade 2 and Grade 3, and he sets the standard here.

His main threat looks like being the Cabo Spirit from the one gate who has won two of his last three, both in graded stakes company, and this deep closer looks to have an idea post position with this race starting in the chute which gives him an advantage. He is proven over this distance and expect a strong run late if he can secure a mid-pack stalking position early.

Looking at some of the unexposed runners at this level and the one that takes the eye is Spycatcher who is still to break the maiden tag, but was second in the Grade 2 X two back and will clearly enjoy stretching back out to a mile and an eighth. Trainer Mark Glatt would not be pitching him in if he felt he had no chance and the jockey/trainer combination have a solid 15% strike rate here at Del Mar.

Another unexposed runner and one of the longshots that look interesting is Evan Harlan who is 5-1-3-1 to date. He only broke his maiden tag last time when going gate to wire over a mile and a sixteenth, but had plenty in reserve, and from a solid gate draw in six, he could well be the speed and may hang around long enough to grab a slice.

Of the others, Celestial City and War At Sea have solid form, with the latter winning three of his last four.

It’s a very open contest and the favorite Wit’s chance is there for all to see based on form. He has the top Beyer figure (95) in the field, but a poor post draw out wide is a negative and he’ll likely have to close into the race late on.

The selection is CABO SPIRIT which looks like having the perfect race setup. His draw in gate 1 is good and if he can secure a good spot coming out of the chute, then his strong closing style should be perfect with plenty of speed likely to come from Evan Harlan.

The latter could hang around for a slice and hit the board and also watch out for Spycatcher who looks a big morning line price.

12 foes are set to go to post for the Grade 3 Jimmy Durante Stakes which was originally founded on 19 December 1990 as the Miesque Stakes at Hollywood Park Racetrack and was originally for three-year-old fillies run over a distance of 1 1⁄16 miles.

The event was named in honor of the mare Miesque, who won the Breeders’ Cup Mile twice and was the United States Champion Female Turf Horse in 1987 and 1988.

This year’s event has a cracking field of 12 that will go to post in this Grade 3 for two-year-old fillies and we have plenty of horses here that are unexposed but have already shown plenty of potential.

The likely morning line favorite is sure to be the Chad Brown barn inmate Liguria who has had two starts and stepped up on her debut to break the maiden at the second attempt over a mile and a sixteenth at Belmont Park back in October. She comes back from the layoff and Brown is 29% with horses coming back from a 31-60 day layoff.

Her maiden win was a strong close where she prevailed by a neck getting up late on the wire. This cutback in distance should not really be an inconvenience but it is something to think about if she ends up a short price on the day.

One of her main rivals is likely to be Quickly Park It who is two from three starts and broke her maiden tag on the second start, and then demolished her rivals when winning by six lengths in a minor stakes race next time. Both wins have come with closing stretch drives and it is important to note she is not too far behind Liguria on Beyer speed figures.

Peter Miller has two arrows to aim here in Bizzy Gal and Jordan and it’s the first named that looks to hold the better chance. She has won two from five after her first two runs at MSW level were forgettable. She seems to have improved lately and it’s interesting that Miller now gives her a stretch out in this much tougher grade and she could be one to include in exotics at bigger odds.

Showgirl Lynee B won her first three starts but was well held when stepping up the class ladder last time and this might once again be a step too far.

Another with solid claims is the Philip D’Amato-trained Thebestisyettobe who won her only start in Ireland before switching stateside. Both runs have come here at Del Mar and after being off slow in her US debut she rallied to run 8th of 11, closing late. Dropped in class last time she again closed late to be beaten just half a length and there should be more to come, even though it is interesting to note that Prat deserts her for Liguria.

Of the longshots, then Ragtime Rose looks interesting after breaking the maiden tag last time over six furlongs. Her wide draw is a negative but she has shown plenty of speed and is another to consider for Exotics.

Liguria has all the plus points here to think she’ll put up a bold show and with Prat teaming up with Chad Brown, then we have a lethal combination who have a 29% strike rate when teaming up. However, the wide gate and cut back to a mile are slight negatives and that means she might not be great value, albeit she should hit the board.

The one that we like is the fast improving QUICKLY PARK IT who has won her last two and looks sure to run well having already beaten another of today’s foes Ami Please two back by six lengths. At the forecast morning line odds, she looks the value.

For exotics, then covering with Bizzy Gal and Thebestisyettobe could pay dividends and these two should also be in contention to grab a slice and hit the board.