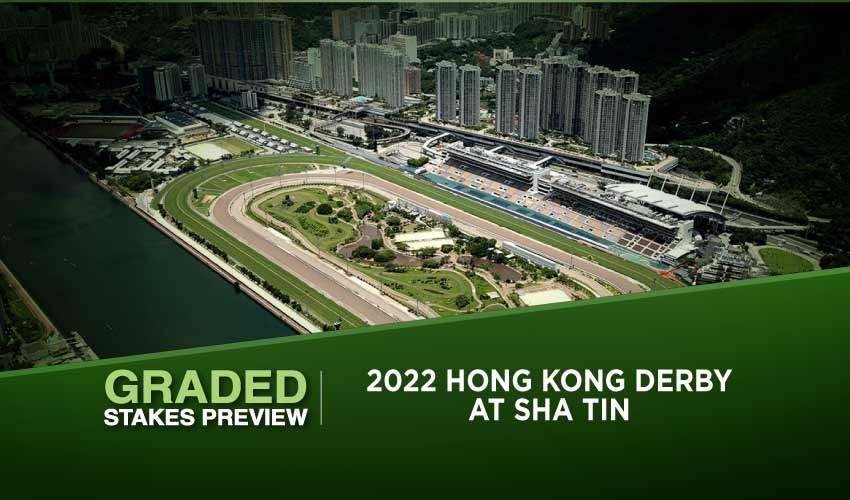 Sunday’s card at the Sha Tin Racecourse features the 2022 Hong Kong Derby, in other words, the mile and a quarter long third leg of the local Triple Crown for four-year-old horses. In the past, the grand Golden Sixty won the event, so let’s see who’s preferred to strike gold this time.

14 four-year-old horses will line up for Sunday’s 2022 Hong Kong Derby held at the distance of a mile and a quarter. The turf race doesn’t boast a Graded status, but with its purse of $ 24,000,000, it definitely is a prestigious feat where California Spangle is the leading chance.

Aboard with Zac Purton, the Ted Cruz bound colt has won six of his eight starts; while he always relies on his early speed, then he sets the pace and tries to resist his finishing rivals. Such a tactic proved successful for California Spangle last time out when he scored the Hong Kong Classic Cup over a mile and a furlong, while the longer distance of the Hong Kong Derby doesn’t have to suit the him.

However, he still seemed full of energy when cruising for his February win, so it’s possible that California Spangle will manage to cover the whole trip from the front and snatch the victory once again. The statistic devotees and a bit superstitious fans of the horse may spot a problem in the number as no horse has won the HK Derby with number 1 since 1989; however, the outside gate could be a worse thing to handle. Still, if he was quick on his feet, it shouldn’t be an issue for him to charge for the front right away and stay there until the end.

As said in the first paragraph, the HK Derby is the last part of the local Triple Crown for four-year-olds. California Spangle thus won the second leg – the Classic Cup, while Romantic Warrior bettered him in the first part – the Hong Kong Classic Mile.

He’s another outstanding specimen as he scored five races in a row, his career culminating in the Classic Mile where he ran down California Spangle, who, however, wasted some energy right at the start when he had to be quick enough to overcome the outside draw and seize the front before the turn. Romantic Warrior recorded his very first defeat in the Classic Cup as he couldn’t get over fourth place, getting also bettered by Turin Redsun and Money Catcher. Still, his finish was nice, so with some luck on his side, he could return to winning ways here.

The mentioned duo could place again, but it depends on how they’ll handle the trip as they’ve never covered it. In case they thrive on the mile and a quarter, they might even turn the tables on their rivals, especially Turin Redsun could be interesting here. The last to mention is Senor Toba as he’s already scored at Sunday’s distance, ran alright in the Classic Cup, and given he’s about to be piloted by the local jockey legends Joao Moreira, he needs to be considered.

Our betting pick for the Hong Kong Derby is:

Romantic Warrior. The favorite lost the HK Mile due to the outside gate, which could be his weak spot once again, and Romantic Warrior should be the one exploiting it.