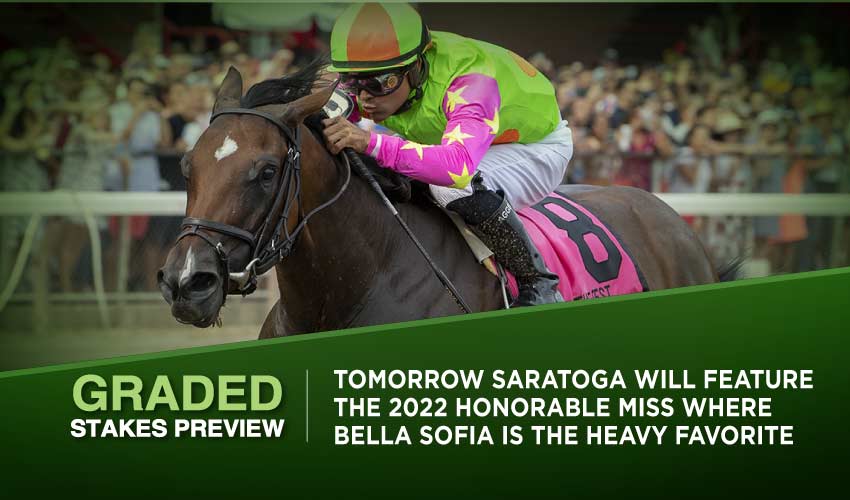 There may be only four runners in the G2 2022 Honorable Miss at Saratoga on Wednesday, but a treat is in store with old rivals Bella Sofia and Frank’s Rockette taking on G1 winner Kimari and the prolific minor-league sprinter Amadevil in a mouthwatering clash of speed.

Track officials won’t be pleased with such a short field for the 2022 Honorable Miss, the feature at Saratoga on Wednesday, but bettors still have a tricky puzzle to solve with all four runners bringing plenty to the table.

The heavy favorite and top-weight is the high-class Bella Sofia, who has only missed the board once in eight starts, won the G1 Test here over seven furlongs last summer, and is unbeaten in 2022.

On her last start she made all to beat another short field – filly/mare sprints are like that – in the G2 Bed o’Roses at Belmont Park over seven, and before that she hooked up with Frank’s Rockette in the G3 Vagrancy back at the Big Sandy over six and a half and the pair fought out a thriller, going nose to nose down the stretch before Bella Sofia put that nose ahead at the wire.

She spots 1lb extra to Frank’s Rockette this time and it’ll be tight between them again, especially back down at six furlongs, the bare minimum for Bella Sofia.

That effort in the Vagrancy marked a return to her best for Frank’s Rockette, who was G1-placed at the Spa as a juvenile and won the G2 Prioress over course and distance in her sophomore campaign. Her form dipped last year and she comes along today on a six-race losing streak, but that performance in the Vagrancy indicates that the fire still burns brightly, and this may be her optimum distance.

It’s a different story for Kimari, who is on a recovery mission after running possibly the worst race of her career when fifth in the seven-furlong G1 Derby City Distaff at Churchill Downs in May. That was a hot contest but Kimari is capable of much better, as she showed when winning the G1 Madison over seven at Keeneland last year.

She mixes it up between turf and dirt but seems better suited by the main track, and has already shown the speed to win over five and a half furlongs at stakes level. Expect a better showing from her.

This is the first time in Graded company for Amadevil and her first appearance at a top-tier track. She has been outclassing the opposition at stakes level at Thistledown and Belterra Park and six furlongs is her distance, as she showed at Belterra last time when romping by five and three-quarter lengths. She deserves a crack at the big league and gets an 8lb concession from the favorite, and her morning-line odds could well underestimate her chance.

There could be very little between Bella Sofia and FRANK’S ROCKETTE, who is better suited by today’s distance and seemed right back to her best last time.

Follow us on Social Media for more 2022 Honorable Miss updates!