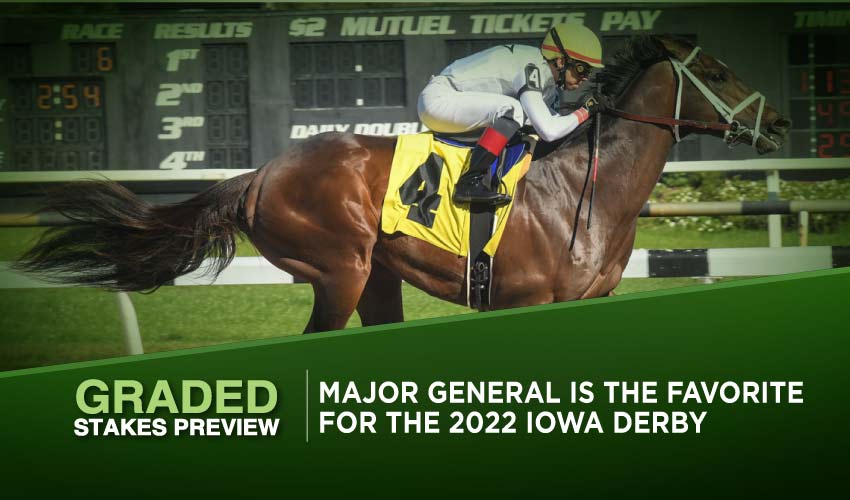 Eight three-year-old fillies head into this G3 dirt race, where the participants will cover the distance of a mile and a half of a furlong. Vying for the purse of $225,000, Candy Raid (5-2) could be the leading chance here in case she won’t line up for the Indiana Oaks. Trained by Kent Desormeaux, the daughter of Candy Ride has gained some Graded experience; however, she didn’t excel on any occasion.

Candy Ride’s most recent effort resulted in fifth place among the G3 company, while she delivered her probably the best performance in a black-type race, which could actually be enough to strike gold in the Iowa Oaks. The distance suits her, and when looking at the field, her most serious rival might be Free Like a Girl (3-1), trained by Chasey Pomier. She has also competed at the G3 level, securing fourth place in the Honeybee Stakes behind the Kentucky Oaks heroine Secret Oath. Such a performance should be enough for her to play a major role in the Iowa Oaks; moreover, she delivered a black-type victory last time out.

Falconet (7-2) completes the most interesting trio of contestants as the Todd Pletcher filly enjoyed two wins in 2022. After breaking her maiden at the second attempt, she went on to bag an Allowance victory over a mile, and even though she surely didn’t take our breaths away by that performance, there should be something about this daughter of Uncle Mo.

The Kenneth McPeek bound Butterbean (5-1) also deserves mention because once she broke her maiden, she was pointed to the Panthers Stakes over a mile, where she scored impressively. On Saturday, she’s about to meet up with the better competition; still, she could be an interesting Graded performer in the making, and without a doubt, she should once again defeat Hartley (8-1), who finished second in the Panthers Stakes.

Our pick for the Iowa Derby is Falconet, whose profile suggests she’s about to improve for this run.

The purse of $250,000 attracted a field of ten three-year-old colts who are about to cover the distance of a mile and a half of a furlong. On the dirt surface, Major General (2-1) is the preferred participant to score the Stakes event as the Todd Pletcher-bound colt was even a Kentucky Derby contender at some point.

The son of Constitution commenced his career in 2021 with a maiden victory, upon which he bagged the G3 Iroquois Stakes. Still, he didn’t perform well among the fiercer competition in the ongoing season, as he was tenth in the G2 Tampa Bay Derby and ninth in the G2 Pat Day Mile. He probably gave his best effort in the G3 Lexington Stakes, where he finished second behind Tawny Port. However, last time out, he couldn’t get past sixth place in a black-type, and therefore, another drop in the class should help him but honestly, it won’t be a surprise for us if a less experienced yet progressive colt betters him.

For example, it could be Conagher (4-1), trained by Michael Tomlinson, who scored his maiden in 2021, while during this season, he succeeded at the Allowance stage. He delivered over six and seven furlongs, so the Saturday distance is a bit of a question; still, he’s shown some talent and could have a say here. Big Blue Line (9-2) has recorded an Allowance triumph as well when bettering his opponents over a mile and a furlong; thus, his affinity towards the trip is quite sure.

In a different article, we discussed the Indiana Derby; however, two participants have also been entered in the Iowa Derby, namely Actuator (8-1) and Rattle N Roll (3-1). The former impressed when scoring his premiere victory in a maiden race that he won by more than seven lengths, affirming there is some talent about him and shouldn’t be discarded in such a competition. Rattle And Roll is a G1 winner who hasn’t displayed a similar touch of form since, and when he ran in a black-type company last time out, he achieved his first triumph of 2022. His class should be enough to bag this if the team opts for going here.

Our pick for the Iowa Derby is Major General, who should be good enough to score a Stakes race.

In this G3 dirt race, six three-year-old and older horses are about to compete at the distance of a mile and a half of a furlong, while the purse of $300,000 lured in exciting names. Let’s start with Warrant (8-5), a four-year-old colt who may secure Brad Cox his third consecutive victory in this race.

The son of Constitution will carry the biggest weight here; however, his results have been so good recently, that he just needs to be the favorite. After he achieved his first Graded triumph in 2021, he hasn’t added another one since, but Warrant collected a couple of second places in the G2 scene. At first, he was bettered by Express Train in the Santa Anita Handicap, and then Fearless defeated him in the Brooklyn Invitation in June. Running in third in a G3 race behind Mandaloun and Midnight Bourbon was also decent, so even though the weight might stop him, he needs to be seen as the favorite here.

Five-year-old Silver Prospector (5-2) looks to be his main rival after delivering a victory in the G3 Steve Sexton Mile, his first success since his two-year-old campaign. The Steven Asmussen bound grey might have just returned to form in May, or it might’ve been a fluke, and therefore, he has to prove his point on Saturday. Even smaller weight awaits nine-year-old veteran Rated R Superstar (3-1), whose three 2022 performances were lackluster; however, in March, he scored a G3 race. There still could be something in him, but the younger contestants look more appealing.

Officiating (4-1) is the last participant whose success wouldn’t mean a big upset, given he is a double G3 victor; however, he probably prefers shorter trips. After finishing seventh in his seasonal debut, Flash Of Mischief (6-1) returns to the track where he was second in the last year’s Iowa Derby and could catch some of his rivals off guard, while Fleetridge (12-1) is an outsider.

Our pick for the Prairie Meadows Cornhusker Handicap is Warrant, who should be capable of further progress while the carried weight still isn’t that enormous to prevent him from scoring.