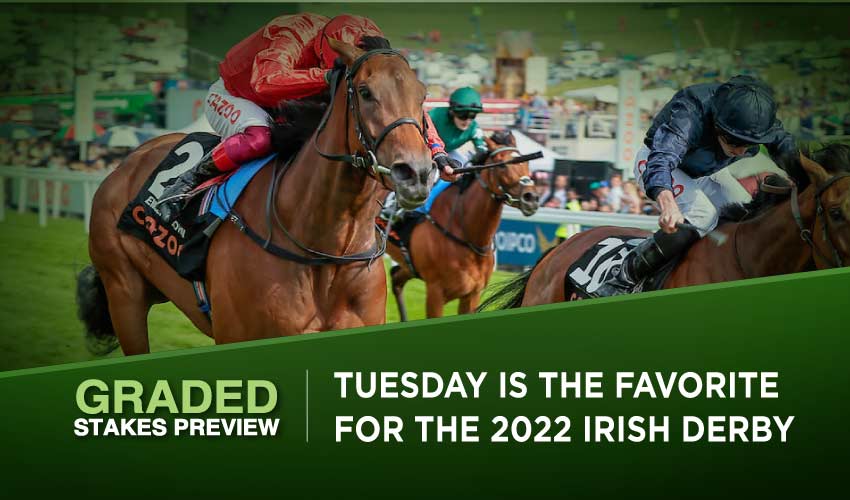 On Saturday, the 2022 Irish Derby meeting will culminate at the Curragh Race Course with eight participants lining up for the G1 Irish Derby. After Balanchine struck gold in 1994, none filly has repeated such a stunt, while the waiting could be over this weekend as Aidan O’Brien sends the Epsom Oaks winner Tuesday to face the colts.

Her most serious rival seems to be the Ralph Beckett bound Westover, who turned an unlucky run in the Epsom Derby into a fine third place. The card also offers the G2 Railway Stakes for two-year-olds where Blackbeard is the favorite to score the race that was taken most recently by sprinters like Go Bears Go and Laws of Indices and a Classic winner Siskin.

In the end, three-year-old and older horses will face off in the G3 International Stakes, with Mac Swiney trying to achieve a victory after more than a year without winning.

Six two-year-olds will line up in this G2 race held at the distance of six furlongs. On the turf surface, Blackbeard (5-2) is the leading chance in the fight for the purse of €75,200 as the Aidan O’Brien bound bay has already amassed three victories.

The son of No Nay Never scored his debut in April on the all-weather surface, upon which he narrowly bagged a Listed triumph and easily delivered in the G3 Marble Hill Stakes in May. Back then, he showed off a brilliant turn of the foot, thanks to which Blackbeard started off as a favorite in the G2 Coventry Stakes at the Royal Ascot meeting.

Under Ryan Moore, the bay once again quickened in the closing stages; however, his finish wasn’t that powerful to threaten the leaders. Blackbeard had to settle for fourth place; still, he gave a decent effort, and if he repeats it on Saturday, he should score a G2 victory at the second attempt.

He definitely looks classy enough to do that; moreover, he might have disliked the Ascot track, and upon return to Curragh, he looks ready to strike gold. Aidan O’Brien relies here also on Age of Kings (5-1), who finished seventh out of 17 participants in the Coventry Stakes after smoothly winning a race in Curragh. In this company, the son of Kingman should be capable of earning a place.

Still, the field comprises another couple of interesting colts, especially Shartash (4-1), who has two starts under his belt. He ran in third in his debut, but then he was a narrow winner at Naas, bettering Age of Kings by a nose.

We also like Crispy Cat (5-1) with four outings to his record as he, indeed, scored only his premiere start; however, he then collected two-second places at the Listed stage. Last time out, Crispy Cat snatched up third place in the G2 Norfolk Stakes during the Royal Ascot meeting, and if he handled the additional furlong on Saturday, he shouldn’t be without a chance here.

The last contestant that might have a say is Apache Outlaw (11-1) with a maiden victory to him, while unplaced Borletti (5-1) is an outsider of the feat.

Our pick for the Railway Stakes is Blackbeard, as his performance in the Coventry Stakes was a bit disappointing, but in this company, he should make amends for the run. Crispy Cat could be the best of the rest.

The third Classic race of the Irish Flat season is open to three-year-old colts and fillies who are about to clash at the distance of a mile and a half. The purse of €1,000,000 attracted a field of eight contestants that could be divided into three groups. There are a couple of favorites, a trio of those hoping to snatch a place, and finally, a trio of outsiders.

Currently, it is Tuesday (3-2) which is perceived as the leading chance here. The Aidan O’Brien-trained filly broke her maiden in her 2022 debut, upon which she immediately proved her class when running third in the 1000 Guineas.

Subsequently, the daughter of Galileo finished second in the Irish 1000 Guineas, and in June, she earned Classic glory at the third attempt. Back then, Tuesday was a viable chance for the Epsom Oaks, where she bumped into great Emily Upjohn; however, Tuesday fought bravely in the closing stages to secure the success by a neck.

Full-sister to other two Classic heroines, Minding and Empress Josephine, showed she doesn’t mind the long-distance, and therefore, she could become the first filly to score in the Irish Derby since Balanchine in 1994.
Her most serious rival is definitely Westover (7-4), trained by Ralph Beckett. The son of Frankel ran a blinder in the Epsom Derby where he faced severe traffic issues; still, he managed to recover from them and missed the second place just by a head.

The big bay hinted some talent as a two-year-old when finishing second at the Listed stage, while in 2022, he entered the season with a narrow victory in a G3 Classic Trial.

If he showed a similar will to go forward as he did in the Epsom Derby, he could better Tuesday. The Joseph O’Brien bound colt Hannibal Barca (8-1) could be the best of the rest here. In 2021, the son of Zoffany recorded fourth place at the G1 stage, and in the ongoing season, he’s hit the track just once to score a G3 victory in May.

Although there might be some doubts regarding his staying ability, Hannibal Barca could handle it; moreover, he should be capable of further progress. On Saturday, he has a strong chance to seize a place.
Donnacha O’Brien then relies on Piz Badille (8-1), who failed to shine in the Epsom Derby after bagging a Leopardstown G3 trial.

Despite the fact he should have no problem with covering the distance of a mile and a half, he mightn’t be classy enough to play a big role here.

The last contestant who is considered is trained by David Menuisier as he sends in Lionel (10-1), a Listed winner who bettered smart Lysander in that run.

Our pick for the Irish Derby is Westover, who delivered such a great run in the Epsom Derby; he definitely deserves another chance to earn Classic glory. He only needs some luck.

This G3 race with the purse of €50,000 lured a field of seven three-year-old and older horses. On the turf surface, they will cover the distance of a mile and a quarter, while the main victory candidate seems to be Mac Swiney (2-1).

The four-year-old colt trained by Jim Bolger scored the G1 Irish 2000 Guineas in 2021 but hasn’t won since. Indeed, he finished fourth in the Epsom Derby and third in the Champions Stakes; however, his only 2022 outing was lacklustre.

In the G1 Tattersall Gold Cup, Mac Swiney was seventh out of eight participants; while the reason might be he just needed one run before returning to the winning ways, the chestnut son on New Approach has always been at his best on the soft to heavy surface.

On Saturday, he would need exactly that to fulfill the role of a favorite as otherwise, Bear Story (5-1) might better him the way he did in the Tattersalls Gold Cup. It wasn’t by far; still, this Michael Halford bound colt has recorded two places at the Graded scene in the ongoing season.

At first, he finished third in a G3, upon which he suffered a loss again to Layfayette in the G2 Mooresbridge Stakes. He doesn’t look like a G1 prospect, but he should be capable of bagging his second G3 win at some point.

Rambles Of Thunder (4-1) spent his three-year-old campaign in France, where he delivered in a Listed race on the very soft surface, but whenever faced with a fiercer company, he failed to shine. In 2022, he is trained in Ireland and quite enjoyed his second start here, striking gold by three lengths at the Listed stage at the Gowran Park.

Naturally, he’s about to meet Mac Swiney here; however, his May victory was so impressive, that he should have a say also in this G3 renewal. Visualisation (12-1) is also a Listed winner capable of placing at the Graded stage.

Besides the abovementioned four-year-olds, the International Stakes attracted some three-year-olds, including Duke de Sessa (7-1), who won a G3 in 2021, while in this season, he finished fifth in the Irish 2000 Guineas. Akhail (10-1) was the last in the 2000 Guineas behind Coroebus; Vega Magnifico (8-1) is just a maiden winner.

Our pick for the International Stakes is Rambles of Thunder, who was brilliant in the Gowran Park, and unlike some of his rivals in this competitive field, he doesn’t mind slightly firmer ground.