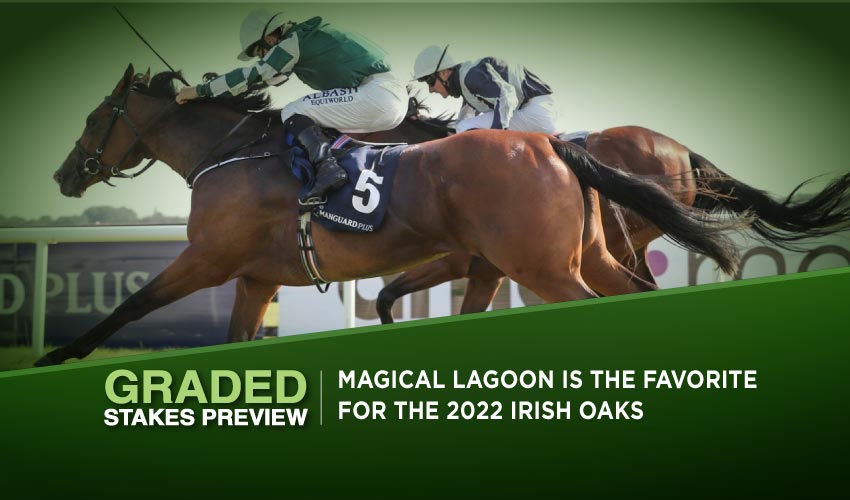 The flat season is well underway but the big races just keep on coming. This Saturday 16th July,  all attentions turn to the Curragh for a card that is headlined by the 2022 Irish Oaks. Also on the card is the Grade 2 Sapphire. Here we preview everything you need to know.

Eight horses are set to go to post for one of Ireland’s most prestigious races, the Irish Oaks. Everything was set up for a renewal of this year’s English Oaks where the Aiden O’Brien trained Tuesday narrowly beat the John Gosden trained Emily UpJohn. However, it has been confirmed that Tuesday will miss this race to focus on other targets.

With Tuesday now out of the race, Emily UpJohn will start as the warm favourite.

She has looked a class performer and despite narrowly missing out on the Oaks crown, there is little doubt that she would have won the race had she not slipped at the start. The fact she got so close after the tough start only further confirmed her class. She should take all the beating here and land her first Group One race.

Second favourite for the race is Magical Lagoon which is trained by the magnificent Jessica Harrington. One of the leading trainers in Irish racing for the best part of a decade, she has never won this race and will be desperately wanting to change that record here.

Magical Lagoon has won two of her five career starts and won in game fashion when she won the Group 2 Ribblesdale Stakes. She is a graded winner in comparison to Emily UpJohn but you feel that she will need a career best if she is to come out on top here.

After the top two in the betting, there is a large jump in price until we find the Aiden O’Brien horses of Emily Dickinson and History.

History has won two of her six career starts but has struggled in her last two starts in higher graded contests. O’Brien certainly knows how to get a horse ready for this famous race but it would need to take something special for History to come out on top.

Emily Dickinson has won just one of her career five starts but has finished second in Group 3 company. She was unlucky not to win that day and there is a sense that there could be more to come. Seamie Heffernan won this race back in 2016 and will be hoping he can double that total here.

The third of the O’Brien horses is Toy who will be ridden by stable jockey Ryan Moore. Highly tried, the general feeling is that this race could be far too hot for her to handle. She finished 12th of 17 in the Group 1 Prix de Diane Longines and is another who will need something special if she is to cause a shock.

The long shot of the race could be the second Jessica Harrington runner, Fennela. Fennela has only had three career starts but could be a real improver. A comfortable winner of her maiden last time out, this jump to Group One company could be far too big a leap, but there could be a tonne of improvement to come and she is unexposed. For those who like to play the places, she could be a really good shout.

Emily UpJohn looks like she could be the next superstar horse in the fillies division. She hails from the connections that did a masterful job with Enable and the indications are that she could be just as good. Her odds would be ridiculously short if she was able to win the Oaks and although a short price here, she has every opportunity to cement her class here. Due to her scratched Emily Dickinson is our betting pick

The perfect appetiser to the Irish Oaks comes in the form of the Group 2 Sapphire Stakes. Nine will be heading to post and the betting is wide open.

The current favourite is Castle Star who has won two of his seven starts. A slight leap of faith is needed as he has been off the course since September last year. Despite the absence, his form is amongst the very best on offer. A winner of Grade 3, Castle Star has ended up as a runner-up in Grade 1 and Grade 2 company and will be hoping that he can score another big race here.

Behind Castle Star in the betting is last year’s victor Mooniesta. An outsider that day, Mooniesta is a heavy favourite this time around. He hasn’t been in the winner’s circle since his victory last year but trainer Jack Davison will hope his charge is ready and fully firing here.

A threat to the top two in the betting will be Cadamasto who is trained by Aiden O’Brien. He returns to calmer waters, having been tried in some highly competitive races. It will be a concern to those wanting to back Cadamosto as it’s been some time since he emerged in the winner’s circle. A twelfth place finish in the Commonwealth Cup needs to be bettered but he could be a danger.

With many horses heading into this year’s race without a victory for some time, the form horse is Brostaigh. Trained by Joseph O’Brien who is enjoying a stellar season, Brostaigh has won his last two starts including victories in Listed and Group 2 company. At a fairly big price, Brostaigh has to be the value play of the race and should definitely play a part in the final placings.

Castle Star’s form is good but the absence he has to overcome is a worry. The play might be Mooniesta. Clearly a fan of the track, the experience of winning this race last year could prove to be invaluable. A danger to all could be Brostaigh. A winner of his last two races, expect Brostaigh to be a threat to all.

Follow us on Social Media for more 2022 Irish Oaks & updates!