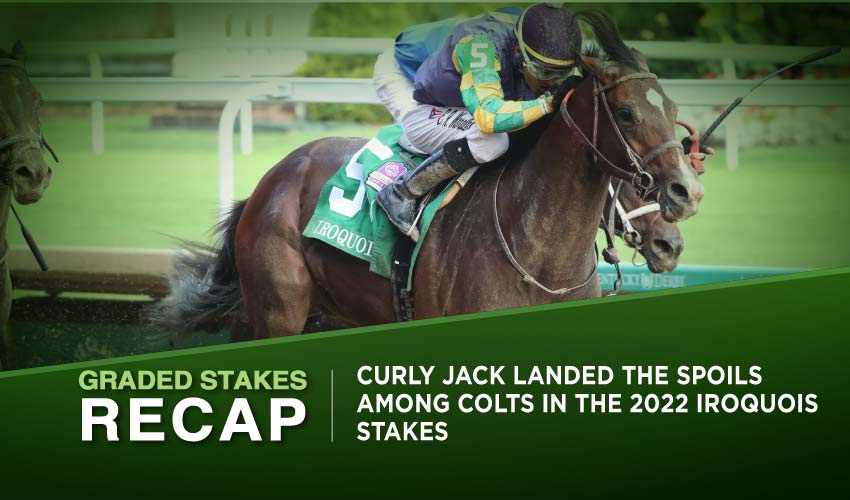 On Saturday, three G3 races were held at the Churchill Downs Race Course, two of which were the initial events of the Road To The Kentucky Derby and Kentucky Oaks, respectively. Curly Jack landed the spoils among colts in the 2022 Iroquois S, while Fun And Fiesty scored the Pocahontas Stakes for fillies. G3 Locust Grove Stakes then saw an impressive success of four-year-old Played Hard.

Five three-year-old and older fillies and mares clashed in this G3 dirt race over a mile and half a furlong. The purse of $400,000 attracted especially Crazy Beautiful (49-20), who was expected to put up a fight to bag her premiere Graded win of the season; however, Played Hard (85-40) was uncatchable on Saturday. The Philip Bauer bound filly had a great start, set the pace, and even though Crazy Beautiful bettered her on the far stretch, she took command again after turning for home. Under Joel Rosario, Played Hard drew clear from her rivals to secure a smooth victory by five and ¾ of a length in 1m 43.50s. Crazy Beautiful once again had to settle for a place, finishing second in front of third Li’l Tootsie (69-10).

The victorious filly had been just an Allowance winner until Saturday, but she placed at the black-type and G3 level; therefore, Played Hard was an anticipated contestant of the Locust Grove Stakes. The only surprise coming from her triumph concerns the way she scored, as her performance was just impressive. We’re curious what she’ll do next if she defeated solid Graded runner Crazy Beautiful, with such ease. Behind third Li’l Tootsie, Gold Spirit (20-3) was fourth, bettering only Envoutante (19-10), who seized the role of a favorite in the end but didn’t fulfill it.

The purse of $300,000 lured in a field of nine two-year-old colts who covered the distance of a mile and half furlongs. On the dirt surface, they competed in this G3 race for the first points towards the Kentucky Derby 2023, and it was the Thomas Amoss bound Curly Jack (108-10) who earned the first 10 points. Under Edgar Morales, the colt settled in the midpack, then turned wide for home, and because he had enough room to go forward, he naturally did and resisted his finishing rivals. Curly Jack prevailed by a length in 1m 45.62s, with Honed (54-1) denying the odds to secure second place in front of third Jace’s Road (97-20).

The son of Good Magic belonged among runners with a decent chance as he showed some ability when taking second place at the black-type scene, while his experience seemed crucial on Saturday. In the final stretch, Curly Jack looked like he knew what he was doing and easily kept his rivals at bay to take his premiere Graded victory.

Honed spent the race in the last place but improved his position in time to strike in the final stretch and was only one length from causing a huge upset. He had to settle for second place, with Jace’s Road taking third when looking defeated in the final turn. After being close to the pace, he seemed entirely empty when turning for home, but he found some extra energy to leave the rest of the field behind, including the preferred couple Damon’s Mound (11-4) – Echo Again (4-6-). They fought for the lead too early; moreover, the latter turned the first turn too wide, and honestly, the jockey simply wanted too much from a colt who had only one start under the belt.

What Julien Leparoux didn’t manage in the Iroquois Stakes, he pulled off in the G3 Pocahontas Stakes as after finishing second with Honed in the previous race, he struck gold aboard Fun And Fiesty (25-4) in this $300,000 event over a mile and half furlongs. On the dirt surface, thirteen two-year-old fillies competed for the points towards Kentucky Oaks, with Fun And Fiesty prevailing over her more preferred rivals in a fine style. The Kenneth McPeek trained bay galloped at the rear of the main field and improved her position on the far stretch to turn for home in quite a good spot. Subsequently, she delivered a great finish, took command after a brief fight, and cruised home in 1m 45.86s. Shoplifter (147-10) finished second by three and ½ of a length, with Grand Love (21-20) keeping third place.

With this victory, Fun and Fiesty achieved her premiere Graded success as prior to this run, she scored only a maiden, yet at the third attempt, so she was already quite experienced when heading into the Pocahontas Stakes.

Follow us on Social Media for more 2022 Iroquois S updates!