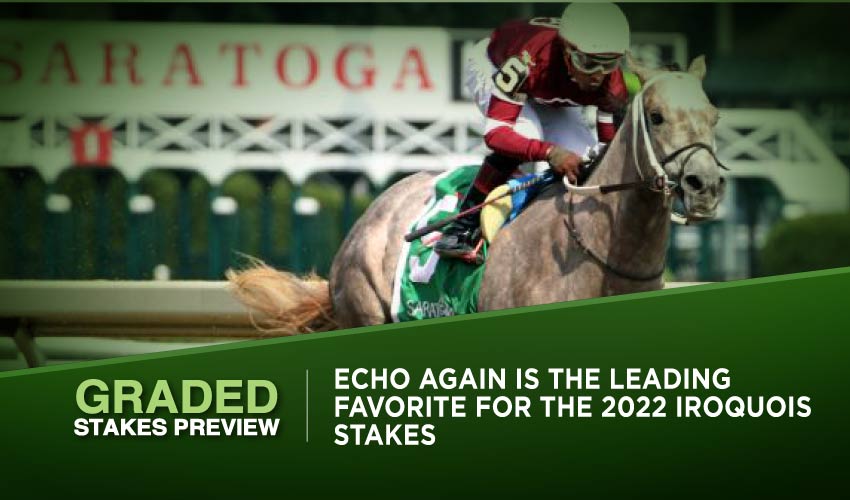 Three G3 races will be held at the Churchill Downs Race Course on Saturday, with two meant for two-year-olds. Namely, it’s the 2022 Iroquois Stakes for colts where Echo Again seems to be the leading chance, while the Pocahontas Stakes is wide open. Three-year-old and older fillies and mares then clash in the G3 Locust Grove Stakes, providing a solid opportunity for Crazy Beautiful to achieve her first Graded win of the season.

Six three-year-old and older fillies and mares head into this G3 dirt race, boasting the purse of $400,000. The contestants will cover the distance of a mile and half a furlong, while there’s a trio of participants who wouldn’t cause any surprise when striking gold.

Their odds are very short, while Crazy Beautiful (9-5) is currently the number one here. The four-year-old filly, trained by Kenneth McPeek, has already amassed twenty outings, being quite a consistent Graded runner since the beginning of her career. In 2020, Crazy Beautiful even ran in second at the G1 scene; in 2021, she scored two G2 races, and even though she hasn’t added another Graded victory to her resume in the ongoing season, she could do so on Saturday. Her most recent starts occurred among very strong competition, so despite the fact she didn’t better than many rivals, her performances still were solid.

The drop in the class should suit her, however, Played Hard (2-1) could be a tough nut to crack. The four-year-old bay hasn’t scored at the Graded level yet as she prevailed only in Allowance races, but her efforts in black-type and G3 events were promising. The Philip Bauer bound filly continues to look progressive, and she’s already defeated Crazy Beautiful. She carried considerably smaller weight than the grey filly, though.

This time, they’ll carry the same weight, which naturally also applies to Envoutante (5-2). The five-year-old mare is the favorite’s stable-mate and has been a good servant for the connections, too, given she’s triumphed three times at the Graded stage. She won twice the G2 Falls City Stakes, which would’ve been enough for her to be the first chance here, but her only two races of 2022 weren’t anything special. After running last in the G1 competition, she finished third in a Listed and needs to improve on that at least a bit to threaten Crazy Beautiful.

Regarding the rest of the field, Gold Spirit (6-1) aims at her premiere outing of 2022 and should be better than the remaining duo, Listed winner Li’l Tootsie (8-1) and outsider Princess of Cairo (20-1).

Our pick for the Locust Grove Stakes is CRAZY BEAUTIFUL, whose efforts among the elite weren’t bad, and she should be the classiest among these rivals.

Another G3 dirt race of the card is open only to two-year-olds who will cover the distance of a mile and half a furlong.

Nine juniors vie here for the purse of $300,000, including the Steven Asmussen bound Echo Again (2-1). The son of Gun Runner has hit the track just once as he broke his maiden in August at Saratoga. Back then, the grey had a great start, set the pace, and upon turning for home, Echo Again drew clear from his rivals easily to score by almost seven lengths. He really enjoyed himself in that six-and-a-half furlongs-long race and is expected to put up a solid performance again.

Damon’s Mound (5-2) looks like the favorite’s most serious opponent, given he has already bagged a Graded victory. The Michelle Lovell trained bay delivered in his maiden by more than 12 lengths and then prevailed over Gulfport in the G2 Saratoga Special Stakes over six and a half furlongs. He relied on his superb finish in August, and if he handles the distance, he could maintain his unbeaten record here.

Brad Cox sends in Jace’s Road (7-2), who has just one start under his belt, scoring his maiden at Ellis Park by more than six lengths. He’s definitely a place contender. The last duo to mention consist of Curly Jack (5-1), a maiden winner who ran in second at the black-type scene, and Confidence Game (12-1). The latter struck gold at the second attempt, winning by five lengths over six furlongs.

Our pick for the 2022 Iroquois Stakes is ECHO AGAIN, whose debut was very promising, and the colt looked quite classy.

Twelve two-year-old fillies will clash in this G3 dirt race, offering the purse of $300,000. A rather competitive field will cover the distance of a mile and a furlong, with Justa Warrior (4-1) being a mild favorite here. The John Alexander Ortiz bound bay bagged her debut in July, upon which she aimed at a black-type event over seven furlongs, where she triumphed by a length. It was a solid display of the Justify daughter’s ability; however, it won’t come as a surprise if any of her rivals better here on Saturday.

For example, Grand Love (9-2) scored her premiere outing by almost five lengths and running from the front; the Steve Asmussen bound filly responded quickly to scoot away from her rivals. Naughty Gal (5-1) shouldn’t be overlooked as well, despite her performance in the G1 Spinaway Stakes being underwhelming. The Wayne Lukas-trained daughter of Into Mischief already has four starts under her belt. After running fourth in her debut, she destroyed the competition in her second attempt and subsequently prevailed in the G3 Adirondack Stakes. She set the pace back then and also in the Spinaway Stakes; however, she faded quickly among the elite, and it’s a question of whether she’s recovered properly after that event, held on September 4.

Southlawn (5-1) unexpectedly showed her affinity towards the dirt surface by winning a maiden over a mile that was formerly scheduled on turf. She settled in second and then easily scored thanks to a good turn-of-foot. She could also be a victory contender here, with other maiden victress, Fun and Feisty (6-1), being considered, too.

Our pick for the Pocahontas Stakes is GRAND LOVE as her first starts caught the eye, moreover, Steven Asmussen usually has his two-year-olds in superb form, thus, the filly should be hugely respected.

Follow us on Social Media for more 2022 Iroquois Stakes updates!