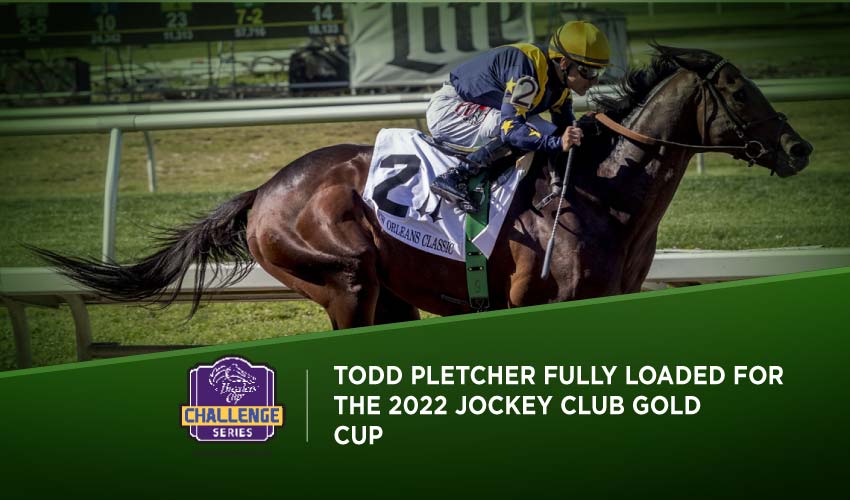 The feature event on the final Saturday of the Saratoga meet is the storied G1 2022 Jockey Club Gold Cup, in which Olympiad – five-for-six in 2022 – bids to bounce back to winning form against a quartet of Todd Pletcher runners headed by G1 winner Americanrevolution and G2 winner Dynamic One. Chalk players may have a good day, with War Like Goddess (G2 Flower Bowl) and Annapolis (G3 Saranac) overwhelming favourites on the morning-line.

This race is no longer a destination for great champions, but the Jockey Club Gold Cup is still a very big deal, and the marquee event at Saratoga on Saturday has drawn a strong field of second-tier stars pitching for a paid berth into the Breeders’ Cup Classic.

Foremost among them is the prolific Olympiad (2-1), who hadn’t put a foot wrong during 2022 until dropping the ball in the G1 Whitney here over a mile-eighth last month, when he ran flat as a pancake behind Life Is Good. He ran so poorly that reasons such as class, distance, trip don’t apply, and perhaps it can be regarded as a throwout.

Before that Olympiad had taken his winning streak to five when beating Americanrevolution (3-1) by two and a quarter lengths in the G2 Stephen Foster at Churchill Downs, stalking and kicking and finishing off strongly, but the other concern for bettors – apart from his wellbeing after that Whitney flop – is the extra furlong, as Olympiad has never gone a mile and a quarter before.

Neither has Americanrevolution, who spearheads a Todd Pletcher quartet after that career-best in the Stephen Foster. Last year’s G1 Cigar Mile winner has a dash of speed and is by no means sure to stretch out effectively, something that his progressive and maturing barnmate Dynamic One (7-2) has proved he can do.

Dynamic One won a mile-eighth stakes at Churchill Downs, with Americanrevolution only fourth, before running his own career-best to win the G2 Suburban over ten furlongs at Belmont Park, duelling with First Captain (4-1) before getting the dollars by a nose, with another barnmate Untreated (12-1), who has yet to win a stakes, three-quarters of a length back in third.

Shug McGaughey has won four JC Gold Cups and his First Captain has a big shot, with that narrow Suburban defeat preceded by victory in the G2 Pimlico Special, when he again finished ahead of Untreated. He has run his best races at Belmont, but has moved up since having blinkers fitted and there may be more to come.

Pletcher’s fourth challenger is Keepmeinmind (12-1), who snapped a seven-race losing streak on his first start for the barn and his first start for almost a year when taking a mile-eighth allowance here in July. At his very best he could figure, but this may come too soon for him.

Tax (10-1) was having his first start for almost 18 months when winning a stakes at Delaware Park in July and is likely to set the fractions until his class deficit tells against him, while Chess Chief (30-1) will struggle to surpass his fifth place in this race 12 months ago.

There are two question marks over the favorite Olympiad and DYNAMIC ONE, who ran a career-best at this distance last time, can win his first G1.

Same again? That has been the cornerstone of 2022 for the marvellous War Like Goddess (2-5), who appears to have a straightforward task as she bids for back-to-back victories in the Flower Bowl, which is a win-and-in for the Breeders’ Cup Filly & Mare Turf but has this year been downgraded from G1 status.

Last year she won the G3 Bewitch at Keeneland and the G2 Glens Falls here over a mile and a half before cruising to victory in the Flower Bowl, and this year she has followed exactly the same path. She took the Bewitch, then came back to the Spa for the Glens Falls and won impressively, eased right down to beat Temple City Terror (8-1) by a length and a quarter with Virginia Joy (7-2) a half-length away third and Flanigan’s Cove (12-1) fourth, another length and a quarter further back.

If War Like Goddess is in the same mood today she’ll be very hard to stop, although a better run can be expected from Virginia Joy, who is much the best of Chad Brown’s three-ply entry and hails from a yard that can seemingly do no wrong with its distaffers this year.

Her barnmates Capital Structure (15-1), comfortable winner of an allowance optional claimer over course and distance last time – Coastana (30-1) beaten two and a quarter lengths into fourth – and Marvelous Maude (20-1), who makes her stakes debut after landing an allowance here over a mile-sixteenth, need career-bests even to hit the board, although last week’s G1 score for Goodnight Olive proves Brown can draw rapid improvement from his fillies and mares.

Despite the threat of Virginia Joy, this is likely to go only one way and it will be a major shock if WAR LIKE GODDESS doesn’t repeat last year’s win.

Whatever the fate of Todd Pletcher’s quartet in the Jockey Club Gold Cup, he will be confident of taking something from the afternoon with Annapolis (2-5), the overwhelming favourite in a short field for the Saranac.

The colt has never been out of the first two and produced a career-best last time when runner-up in the G1 Saratoga Derby over a mile and three-sixteenths, keeping on well but looking as though the distance wasn’t doing him any favours. He’ll be suited by cutting back today and should have nothing to fear from the reopposing Ethereal Road (10-1), who was a distant ninth on his first start on turf.

Jersey Derby one-two Fuerteventura (6-1) and Celestial City (3-1) were separated by a head at Monmouth Park, and Celestial City could flip the form given the promise he showed when third over a mile in the G2 National Museum of Racing Hall of Fame here next time, but stakes debutant Piqua (12-1) has been found a tough spot.

Not the strongest of races but G1 runner-up ANNAPOLIS brings a ton of class to the table and is expected to make the most of this drop in grade.