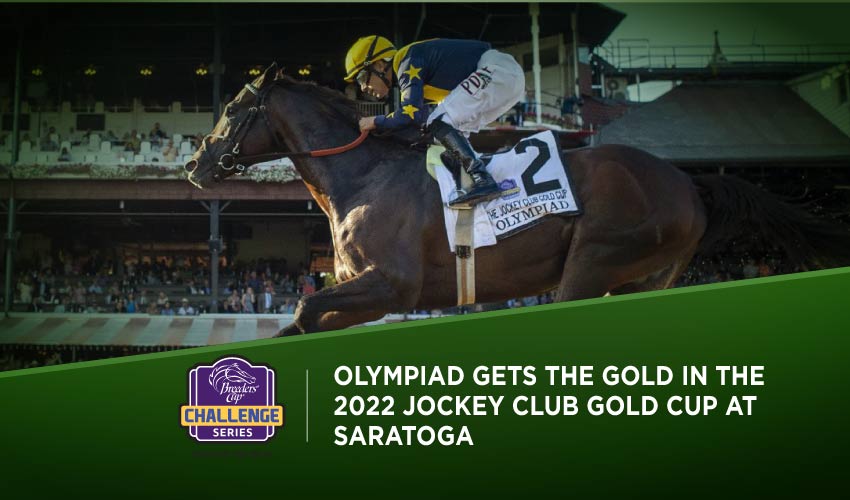 There were Breeders’ Cup clues aplenty at Saratoga on Saturday when the feature 2022 Jockey Club Gold Cup was won in style by BC Classic contender Olympiad. The BC Filly & Mare Turf awaits surprise G1 Flower Bowl heroine Virginia Joy, while Annapolis (G3 Saranac) could make his way to the BC Mile.

Olympiad gets the Gold

Despite what happened out on the west coast on Saturday, there is still a race on for the Breeders’ Cup Classic and Olympiad earned another paid berth into that contest with a dominant victory in the 2022 Jockey Club Gold Cup, the main event at Saratoga on Saturday.

The prolific four-year-old bounced back from his first defeat of 2022 in some style under Junior Alvarado, the 8-5 favorite surging past the front-running Tax around the turn and keeping on strongly down the lane to win unchallenged by two lengths from second-choice Americanrevolution, stopping the clock in 2:02 and change. First Captain was third, beaten another length and three-quarters.

“The other day [Whitney defeat] was almost too bad to be true,” said trainer Bill Mott, winning his fourth Jockey Club Gold Cup. “There are some good horses in this division and he’s up with them.”

This was a first G1 win for Olympiad, who is now six-for-seven in 2022 with his share of the purse pushing his earnings past $2m. With his ten-furlong stamina now proven, Olympiad will likely head straight for Keeneland and a match-up with the mighty Flightline.

The success of Olympiad put a smile back on Bill Mott’s face, coming less than 40 minutes after his star turf mare War Like Goddess was upset at odds of 1-5 in the Flower Bowl by the front-running Virginia Joy.

Irad Ortiz was allowed to set comatose fractions on the 9-2 second-favorite and managed to sustain his advantage all the way home, turning back the late surge of War Like Goddess to prevail by a neck. The longshot Coastana was a length and a quarter back in third; the time was a sluggish 2:19 and one-half.

With this victory, Virginia Joy earned a paid berth into the Breeders’ Cup Filly & Mare Turf and provided Saratoga’s leading trainer Chad Brown with his seventh success in the Flower Bowl.

The 1-9 favorite Annapolis won the Saranac as easily as the tote board suggested he would, making every yard of the running under Irad Ortiz and clearing away to score by five and a half lengths. There was a dead heat for the ‘place’ slot between Celestial City and Fuerteventura; the stopwatch showed 1:42 and one-half.

“He’s a big, strong colt and we think highly of him,” said trainer Todd Pletcher. “I’d say a mile would suit him perfectly.”

Annapolis is now four-for-six lifetime and has never been out of the first two. His next target is the $1m G1 Coolmore Turf Mile at Keeneland on October 8.

Don’t miss the latest Breeders’ Cup Odds. Check out the World’s major Racetrack Entries, and Horse Racing Results and don’t forget to Sign-up and get up to a 10% horse rebate. Terms & Conditions here!