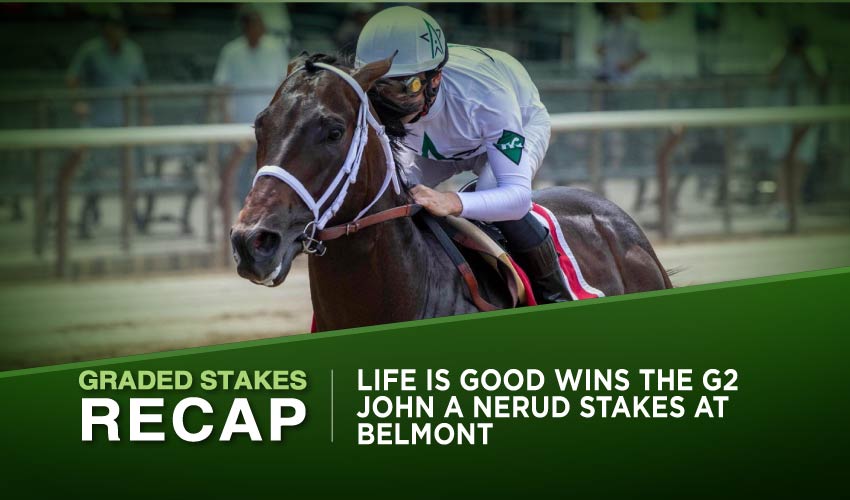 Two heavy favorites swaggered into Belmont Park on Saturday and swaggered out again a little later with their reputations enhanced. Todd Pletcher trains both of them: the exceptional Life Is Good blew away the opposition in the 2022 John A Nerud, but even such a superstar as he wasn’t as dominant as Charge It, who annihilated his rivals by 23 lengths in the G3 Dwyer.

With the devastating, almost nonchalant brilliance that has come to be his hallmark, Life Is Good set himself up for a big second half of the year with a romping success in the John A Nerud, the main event at Belmont Park on Saturday.

On his first start, since his stamina gave out in the final furlong of the Dubai World Cup, the 1-5 favorite Life Is Good reverted to sprinting and ran right away from his three rivals, making all under Flavien Prat and drawing off to win by five lengths from second-choice Speaker’s Corner in a time of 1:21 and three-fifths. Repo Rocks was two and a half lengths further back in third in a race in which the positions didn’t change at all between gate and wire.

“He’s just an incredible horse,” said Elliott Walden, CEO, and president of co-owner WinStar Farm. “We’re excited to see what happens in the rest of the year. We want to get him back around two turns, and it doesn’t look like he has limitations.”

The next stop for the Todd Pletcher-trained Life Is Good, who is now seven-for-nine with more than $3.5m in his bankroll, will be the mile-eighth $1m G1 Whitney at Saratoga race course on August 6. His main target is naturally the Breeders’ Cup Classic, in which he is expected to take on the unbeaten Flightline in a much-awaited clash that could be a race for the ages.

Charge It has the power

Twenty-three lengths are verging on Secretariat territory, and that winning margin was an indication of much bigger things ahead for Charge It as he absolutely tore the Dwyer apart.

The 3-5 favorite was rebounding from a dismal showing in the Kentucky Derby, causing trainer Todd Pletcher to wonder what might have been on the first Saturday in May. Charge It was ten lengths clear at the stretch call and just kept motoring under John Velazquez, with Runninsonofagun a distant runner-up and early front-runner Fluid Situation third. The clock was the only thing that could keep up with him; 1:34 and three-fifths.

“It’s what we were looking for,” said Pletcher, whose big favorites on the day both delivered the goods. “It was a powerful effort and we’re back on track as to where we were after the Florida Derby.”

Charge It, runner-up in the G1 Florida Derby, will now be aimed at the $1.25m G1 Travers at Saratoga on August 27, the midsummer championship for three-year-olds. Pletcher’s G1 Belmont winner Mo Donegal has reportedly been sidelined for the rest of the season, so the trainer has found an instant replacement for all the major races of the second half of the year.

Stay tuned for the latest Breeders’ Cup Odds. Check out the World’s major Racetrack entries, horse racing results and don’t forget to Sign-up and get up to a 10% horse rebate. We offer the best promotions!

Follow us on Social Media for 2022 John A Nerud S & Dwyer Stakes updates!