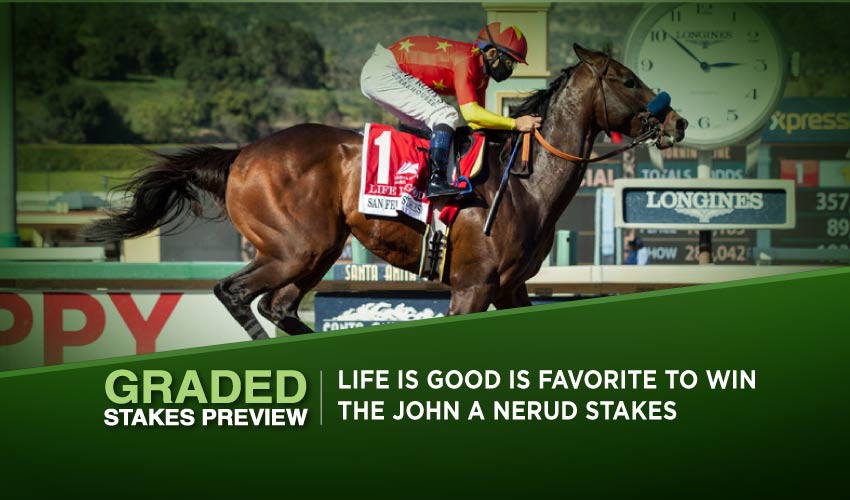 Chalk players could be in their element at Belmont Park on Saturday, with both Graded stakes dominated by a Todd Pletcher-trained favorite. The brilliant Life Is Good makes his return to action in the feature 2022 John A Nerud S against G1 winner Speaker’s Corner, while the 2022 Dwyer Stakes offers an opportunity for Florida Derby runner-up Charge It to get back in the game after finishing down the field in the Kentucky Derby.

Grade 2, $250,000, 7f, 4yo+
Few races are all about one horse, but the John A Nerud – the feature event at Belmont Park on Saturday – revolves around whether the top-class Life Is Good can be as good as ever on his homecoming after a trip to Dubai, as such a debilitating journey can take a great deal out of a horse.

Three horses finished ahead of Life Is Good (1-2) in the G1 Dubai World Cup at Meydan but it was the ten-furlong distance that beat him, as the four-year-old led into the final furlong before visibly running out of gas as the line approached.

He had previously proved and then rubber-stamped his brilliance with a breathtaking victory in the Breeders’ Cup Dirt Mile at Del Mar when he blazed through the first quarter in 21.88 and still had the power to draw almost six lengths clear at the line, followed by another romping gate-to-wire score in the G1 Pegasus World Cup at Gulfstream Park over a mile-eighth.

The cutback to seven furlongs today is less of a concern – he almost beat Jackie’s Warrior in the G1 Allen Jerkens Memorial at Saratoga at that distance – than the Dubai factor, but Life Is Good has only one serious rival here and has the early speed to get his own way on the lead.

That rival is the progressive Speaker’s Corner (6-5), who must be wondering about his luck having come up against the two best older horses in America, the freakish Flightline last time, and Life Is Good today.

He was rolled flat by Flightline in the G1 Met Mile at this circuit, but that’s no disgrace, and had previously announced his arrival at the top table after G2 and G3 scores with a dominant victory in the seven-furlong G1 Carter at Aqueduct, always on the pace and drawing off to win by four and a half lengths.

Speaker’s Corner, a one-turn specialist, also cut out the early fractions in the Met Mile before giving way and will be right up there again, although he doesn’t have the sizzling gate speed already demonstrated by today’s favorite. It may also be a factor that he has been on the go since last August without a lengthy break.

It’s almost impossible to envisage both horses having an off day – one, sure, two, no – so the remaining runners are just shooting for the board. Repo Rocks (12-1) has been busy this year but his only victory came in an allowance optional claimer here over six furlongs, although he did hit the board in G3 sprints at Aqueduct.

The old man of the party War Tocsin (30-1) is a serial non-winner, but he is frequently set tough tasks and was third in the G2 True North – behind Jackie’s Warrior – here last time over six and a half furlongs, albeit beaten 12 lengths. The recently gelded Harvard (20-1) was beaten ten lengths into fourth on his sole start in stakes grade, at Saratoga, and ran the worst race of his career last time out.

Speaker’s Corner is a very good horse but LIFE IS GOOD could be a great one, and he looks set to return to winning form despite the ‘Dubai factor’.

Grade 3, $250,000, 1m, 3yo
Another short field and another chalk for Life Is Good’s trainer Todd Pletcher, with Kentucky Derby failure Charge It bidding to get his career back on track in the Dwyer two hours later.

Like several good horses, Charge It (4-5) lost his hopes of Derby glory in that devastating speed-record first quarter at Churchill Downs. He was too close to the heat to survive, eventually dropping right back to finish 17th, one place behind White Abarrio and one in front of Cyberknife, who has since shown that their Derby performances were no reflection of their ability.

Charge It had earned his Derby chance when runner-up in the G1 Florida Derby over a mile-eighth at Gulfstream Park, partly justifying a winter of hype with a gutsy effort on his stakes debut behind the aforementioned White Abarrio. Throw out that Derby blowout and he is a stand-out on form today – none of his five rivals has even hit the board in Graded company – and this cutback to a mile, the distance of his cantering maiden victory, is no cause for concern.

This is a steep rise in class for Nabokov (2-1), but on the evidence of his rampant all-the-way win in a maiden here over a mile-sixteenth, he is ready for the step up. He may not have to lead – like many gate-to-wire maiden winners, they simply have too much class for the opposition and can’t find a rival to lead them – and has considerable scope for improvement, especially as he hails from a barn that has been in lava-hot form in Graded stakes over the last few weeks.

A little way below the top two comes G3 Gotham sixth Runninsonofagun (8-1), who has been sprinting in two starts since then and ran third in six-furlong stakes here in May, two and a quarter lengths ahead of easy Tampa Bay Downs maiden winner Fluid Situation (5-1), fourth on his stakes debut. Both have potential but have been found a tough spot here.

Unbridled Bomber (15-1) won his maiden over course and distance in November but has lost five straight since then, and his previous effort at this level, when a distant tenth in the G3 Withers at Aqueduct, offers no encouragement. No Sabe Nada (20-1) has to spot weight all round after winning minor sprint stakes at Delaware Park and may be in over his head, despite his recent victory in an allowance optional claimer at the same track.

G1 runner-up CHARGE IT can rebound from his Kentucky Derby flop and looks the obvious choice to take advantage of this considerable class relief.