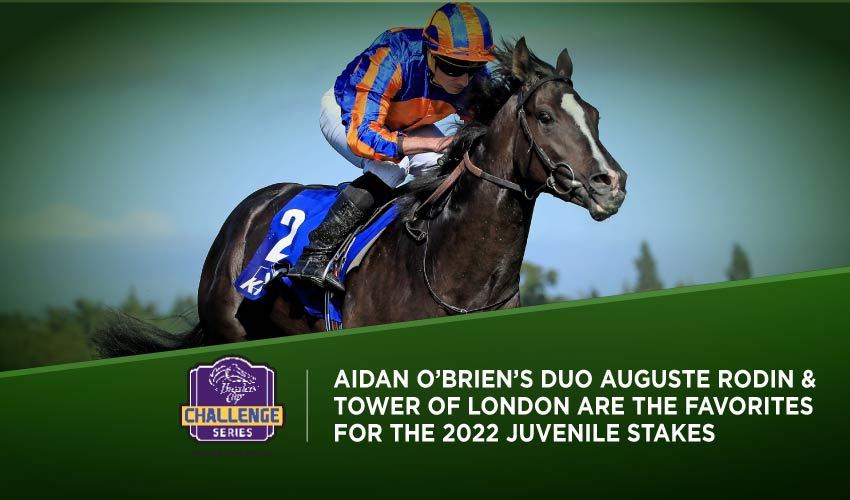 We’re about to cover three Graded races that will take place on Saturday at the Leopardstown Race Course. Two-year-olds will clash in the G2 2022 Juvenile Stakes, where Aidan O’Brien relies on a chancy duo Auguste Rodin – Tower of London, upon which his son’s trainee Point King could snatch up a victory in the G3 Paddy Power Stakes. Milers will then meet up in the G2 Boomerang Mile.

This G2 turf race lured in a field of five two-year-olds. It offers the purse of €150,000 and stretches over one mile, which will Aidan O’Brien’s duo of colts cover in the role of leading chances. As Ryan Moore chose Auguste Rodin (11-8), it should be assumed that this Deep Impact bay is better on Saturday; moreover, he’s also more experienced, even if by just one outing.

The son of the outstanding mare, Rhododendron, commenced his career in June when he finished second, upon which he broke his maiden in a race over seven furlongs. In July, Auguste Rodin led the field of 13 and drew clear in the closing stages, showing potential and enough maturity to record his premiere Graded success. The distance of a mile shouldn’t be a problem.

On Saturday, he will face his stable mate Tower of London (15-8), who has displayed some raw talent in his sole start in July. The son of Galileo was rather keen, but the jockey managed to settle him in fifth. Subsequently, Tower of London delivered a finish to score the race; however, he was hanging right and looked very green, which could be an issue stopping him from bagging the G2 victory at his first Graded attempt.

The remaining trio has also achieved maiden wins at Irish Race Courses. Serious Challenge (7-1) bagged one in Galway, where the gelding trained by Jim Bolger triumphed over a mile and half a furlong, while Alder (8-1) bagged his victory in Killarney over a mile. Besides, Donnacha O’Brien and his Alder, also another son of Aidan O’Brien, Joseph, sends his trainee here – outsider Caroline Street (16-1) who delivered in his debut at Leopardstown. Still, he failed to make an impression next time out as he finished sixth in a G3 event.

Auguste Rodin because of his apparent maturity, Ryan Moore’s choice, and also his quite stellar pedigree.

A competitive field of nine three-year-old and older horses will clash in this G3 turf race, where the participants will cover a distance of a mile and a half. Vying for the purse of €100,000, five-year-old Thunder Kiss (7-2) is the highest-rated contestant as the Ger Lyons bound mare achieved third place at the G1 level last time out.

The grey recorded her sole Graded victory in 2021 but also has two Listed triumphs under her belt, while the more recent she secured in April. Subsequently, she earned some money by finishing fourth in a G2 race, and in June, Thunder Kiss aimed at the G1 Pretty Polly Stakes over a mile and a quarter. In a role of an outsider, the daughter of Night of Thunder left behind some well-known rivals, including Concert Hall or Dreamloper, and if she repeats such a performance on Saturday, she could be a major player.

Four-year-old Earl of Tyrone (4-1) is another considered participant here, given the gelding looks quite progressive. The Paul Twomey trained chestnut climbed from an impressive maiden victory to an easy triumph in a handicap and also a Listed race in Limerick. Moreover, he snatched up a very good third place in Class 2 Ebor Handicap, one of the most treasured handicap races in the United Kingdom.

Three-year-old Point King (7-2) completes the trio of favorites as the Joseph O’Brien bound colt is unbeaten in 2022. After bagging a maiden, he prevailed in another small race, but in August, the son of Zoffany became a smooth winner of a Listed event over a mile and six furlongs. Like Earl of Tyron, this colt shouldn’t be bothered by the distance. He’s progressive and will carry considerably less than the mentioned gelding.

Regarding the rest of the field, it comprises interesting horses as well. For example, there is a duo of small weight carrying three-year-olds, Aidan O’Brien trained Bluegrass (15-2) who should benefit from the shorter trip than he succumbed on to Point King last time out, while Duke de Sessa (12-1) is a classy specimen, but is yet to hit such a long trip. Four-year-old Beamish (8-1) shouldn’t be discarded, too.

Point King, who is progressive and should use the weight advantage over Earl of Tyron.

In this mile-long turf race, four-year-old Jadoomi (5-2) looks quite appealing. The G2 event, offering the purse of €200,000, attracted a field of nine three-year-old and older horses, while Jadoomi could maintain his unbeaten record of 2022 here.

The Simon & Ed Crisford bound gelding won a rich race in France last season, and in July, he remembered that performance by scoring narrowly a Listed again in France, upon which Jadoomi ran down his rivals in the G2 Celebration Mile. He may not have shown everything he’s capable of, and that’s why he’s one of the leading chances for the Boomerang Mile together with Boundless Ocean (5-2).

Because the Jim Bolger trained colt is a three-year-old, he’ll carry less than his rival, which could serve him well, given he’s progressive, too. After a promising spring campaign, Boundless Ocean easily scored his premiere G3 win in July when handling the distance of a mile and a furlong, and in August, the son of Teofilo added his second G3 to his record. The mile trip should suit him, and once again, is expected to defeat Raadobarg (10-1), a four-year-old who finished fourth in the latter G3 race.

Just Beautiful (4-1) could be dangerous for the duo of favorites as she achieved a G3 win back in 2021; however, she hasn’t hit the track since. The last to mention about is Georgeville (14-1), a Listed winner.

Boundless Ocean, whose weight advantage could decide the race. Still, Jadoomi will be a tough nut to crack.