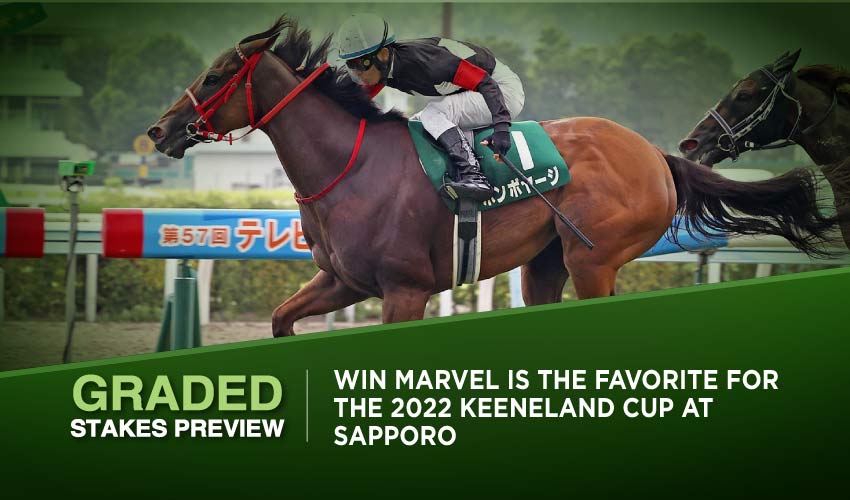 Two G3 races are the main attractions of Sunday’s meetings in Japan. At the Niigata Race Course, two-year-olds will face off in the G3 Niigata Nisai Stakes, won last year by a smart bay Serifos. Subsequently, three-year-old and older sprinters will compete in the 2022 Keeneland Cup in Sapporo.

The six furlongs long sprint race lured in a field of sixteen three-year-old and older horses, including two previous winners. This G3 is held on the turf surface and offers the purse of 82,610,000 Yen, while Lei Halia and Eighteen Girl are attempting to snatch up the victory for the second time.

The former managed to win in 2021 as a three-year-old, and basically, it’s been the peak of her career so far. Prior to that success, the Toshiaki Tajima bound filly scored a maiden, then a Stakes race, and a Listed event, upon which she transformed her form into the Keeneland Cup triumph over Eighteen Girl. Subsequently, Lei Halia didn’t deliver such a run as she failed both in her last 2021 run and the 2022 debut; still, her fourth place in the G3 Hakodate Sprint Stakes in June was quite alright. She could be returning to her form, and she shouldn’t be discarded on Sunday.

Six-year-old Eighteen Girl will show up in the Keenland Cup for the third time as in her premiere she triumphed in 2020, securing her first Graded victory back after bagging some Stakes triumphs. The Yuji Iida trained mare has tried her luck among the elite four times without success, and her two best efforts since the mentioned victory came at the G3 stage – in 2021, she finished second in the Keenland Cup and won the Keihan Hai at Hanshin. Eighteen Girl didn’t display anything remarkable in the ongoing season, but as Sunday’s race saw her at her best in two consecutive years, she might once again run a great race here.

Five-year-old Jubilee Head has been consistent both in 2021 and 2022, and even though he mostly ran in Stakes races, he also finished a decent second in the G3 Hakodate Sprint Stakes in June. He enjoys the distance and should again be a major player alongside seven-year-old mare Believer, who bagged her premiere Graded victory in July. She then surprised her rivals with her powerful kick and scored the G3 Ibis Summer Dash at Niigata. In terms of older participants, Vento Voce and Meisho Mimosa deserve mention as the former used to be perceived as the Graded winner in the making, yet his recent performances were lacklustre. Still, he can regain his sparkle, while Meisho Mimosa is a G2 victress who hasn’t been able to draw on that effort since April.

To talk about the three-year-olds a bit, both of them should be respected because Win Marvel triumphed in two recent runs, including the G3 Aoi Stakes at Chukyo, and Toshin Macau is a Listed winner. The three-year-old colt couldn’t keep up with the best of his peers, but on Sunday, he might appreciate the shorter distance and also drop in the class.

Betting Pick for the 2022 Keeneland Cup

Our pick for the 2022 Keeneland Cup is Toshin Macau, as he should be good enough to strike gold here; moreover, he has only six starts under his belt. Therefore, he is open to some progress.

The G3 turf race attracted a field of eleven two-year-old colts and fillies who will cover the distance of a mile. The junior participants are about to compete for the purse of 58,600,000 Yen; while it’s not easy to choose the most appealing contender as most of them have just one or two outings under their belt.

Because the race is over a mile, we can divide the field into two groups – horses who have hit such a long distance or even longer, and those who haven’t. Granite belongs to the first group. The Naru Owada bound colt has run twice as after finishing third in his debut, he was pointed to a maiden in Fukushima where the son of Danon Ballade delivered over the mile and a furlong long trip. Galloping at the front from the beginning, Granite didn’t allow any of his rivals to close much on him, and upon hitting the final stretch, he drew clear from them to score easily.

Besides class, Granite also showed to be mature enough to focus on the race, so he could be a victory candidate here. The Manabu Ikezoe trained Ice Green () is another participant who looks quite mature, even though he was quite keen last time out. He pulled and was sent to the front where the son of Maurice settled in the end, and because he set a convenient pace, the bay smoothly sustained it until he crossed the wire of the mile and a furlong long maiden. Win Odin and Sea Wizard have already bagged victories at the same distance; however, the former probably won’t benefit from a shorter trip. The latter could take it well but was really green on his debut and might lack some experience on Sunday.

The last couple to mention hasn’t run over the mile yet. The unfavorably names Lord Defeat, trained by Yusuke Wada, has two outings under his belt as he finished second in his debut and then succeeded in a Tokyo maiden over seven furlongs. Back then, he showed a fine finish and will to go among the horses to fight for the triumph, which might come in handy.

The only filly of three here that looks at least a bit appealing is Chico Poco who seemed defeated in the Newcomer race over six furlongs. However, the jockey shook her up successfully, and in the final furlong, the daughter of Black Tide passed her rivals to score by a neck. She could actually benefit from the longer trip on Sunday.

Our pick for the Niigata Nisai Stakes is Granite, who didn’t give his rivals a chance last time out; thus, he looks ready to fight for his premiere Graded triumph.