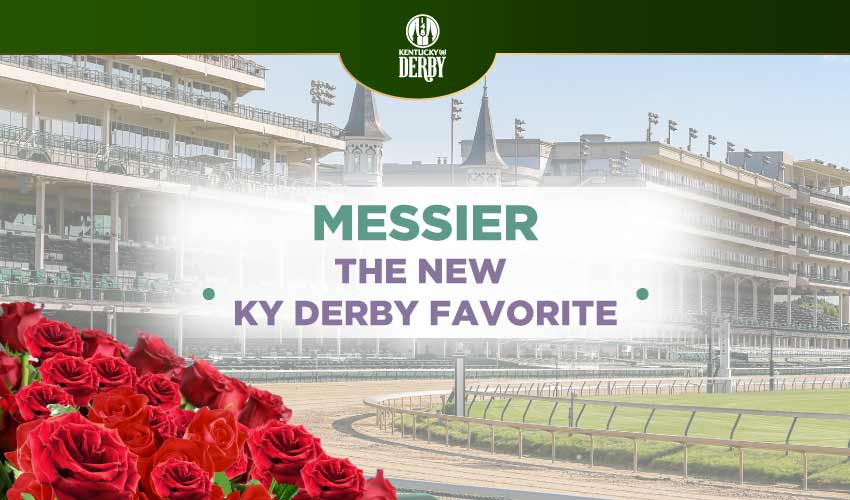 Another weekend, another small step on the Road to the Kentucky Derby, and a giant leap too as Messier gallops to the top for the big race when demolishing his rivals in the Grade 3 Robert B Lewis at Santa Anita. Here we round up recent events, look forward to the next instalments of the journey towards Churchill Downs, and consider that the Breeders’ Cup Juvenile may be a race to mistrust.

Messier marches to the top

We have a new Kentucky Derby favorite. Three months out from the big race, the first change at the top of the market since the fall was prompted by a towering performance from Messier (8-1) in the Grade 3 Robert B Lewis at Santa Anita on Sunday.

The Empire Maker colt was returning to the scene of his maiden win in October, after which he won the Grade 3 Bob Hope at Del Mar – beating recent Grade 2 winner Forbidden Kingdom (30-1) – and ran second in the Grade 2 Los Alamitos Futurity. He was expected to romp in the mile-sixteenth Robert B Lewis as 3-5 favourite against a short field, but no-one could have predicted the extent of his superiority.

The removal of blinkers was a contributing factor – they hadn’t helped him at all at Los Alamitos – to his performance, one that earned the highest Beyer figure of any three-year-old this year, although that isn’t a particularly big sample. But the headgear aside, the main reason for Messier’s superiority here was, well, his superiority. He has always been very highly regarded, has been made favourite for every start, and finally put together a run that showcased his brilliance.

And it’s boring, and you’ve heard it all before, but it must be remembered that Messier is at time of writing ineligible to run in the Kentucky Derby. Unless Churchill Downs opens the door to trainer Bob Baffert, or unless he moves barn in time to collect ‘Road’ qualifying points, he won’t be running for the Roses. After all, there are plenty of big races to be won, and there’s more to a career than just the Kentucky Derby.

Messier is now Baffert’s leading ‘contender’ for the Derby and rightly so, given the absence of former market leader Corniche (15-1), who hasn’t been seen since winning the Breeders’ Cup Juvenile and has no date set for his return to the work-tab, let alone racecourse action. As an aside, Corniche may not be lighting fireworks when he does finally reappear, given the increasing doubts over the validity of the BC Juvenile form.

Every BC Juvenile contestant to have run since has been beaten. Runner-up Pappacap (50-1) was third in the Lecomte, third-placed Giant Game (65-1) was unsighted in the Holy Bull, although see below for a mitigating reason, dead-heat fifth Oviatt Class was third in the Sham, fellow dead-heater Pinehurst (60-1) was runner-up in the San Vicente. Del Mar ninth Barossa (75-1) was third in the Los Alamitos Futurity and tenth home Jasper Great has been thrashed in two starts in Japan. Whisper it, or say it loud, the Breeders’ Cup Juvenile looks a mediocre race.

Behind Messier, there was only daylight, although mention should be made of longshot runner-up Cabo Spirit (75-1), who buckled down gamely in the face of a monster to finish seven lengths clear of Messier’s barnmate Wharton (60-1). He deserves another chance to see whether he has what it takes to stay on the ‘Road’.

Off the ‘Road’ permanently is Oviatt Class, who was 60-1 on the future book. He has injured a hock and has been sent to the sidelines for three or four months.

If it hadn’t been for the Messier tour de force, all the talk would have been about the way that White Abarrio (22-1) put away a very strong field to win the Grade 3 Holy Bull over a mile-sixteenth at Gulfstream Park on Saturday, in the process giving a big boost to Derby second-favourite Smile Happy (10-1), who beat him six lengths into third in the Grade 2 Kentucky Jockey Club at Churchill Downs in November.

This was a much more convincing performance from the Saffie Joseph-trained White Abarrio, who raced closer to the pace than he had at Churchill Downs, a position he owed to the slow start of expected front-runner Simplification (40-1), whose dawdle from the gate changed the whole complexion of the race. In his absence from the lead it was eventual fourth Galt (75-1) who towed them along until White Abarrio swept by at the three-quarter pole and said ‘so long, Charlie’.

He won going away by four and a half lengths from Simplification, who did superbly to resurrect his race after that early faux pas, with the late-charging Mo Donegal (15-1) missing out on the runner-up spot by just a head. All three board horses embellished their Derby prospects: White Abarrio for the convincing win, Simplification for the gritty fightback, and Mo Donegal for the rally that screamed ‘Derby contender’. Grade 2 Remsen winner Mo Donegal’s performance may indeed be the one to take away from the race, as he looked like a horse who would relish a longer distance.

Next stop for White Abarrio is likely to be the Grade 1 Florida Derby back at Gulfstream on April 2; Simplification will be back there sooner for the Grade 2 Fountain of Youth on March 5. The Florida Derby is also a possible objective for Mo Donegal.

Behind the trifecta, the strongly fancied pair Tiz The Bomb (60-1), who was seventh on his return to the main track, and eighth-placed Giant Game both disappeared without trace. There was a legitimate excuse for Giant Game, who was found to have displaced his palate. A minor operation fixes that and he won’t miss any work. Tiz The Bomb, though, such a force on turf last year, really doesn’t look like a dirt horse but will surprisingly be given another chance before connections inevitably decide to put him back on the weeds.

It was a weekend for wide-margin winners, with four and a half lengths the gap in the Grade 3 Withers at Aqueduct, and that still not an adequate measure of the superiority of Early Voting (22-1). The Gun Runner colt blitzed them on only his second start, going gate-to-wire, and if inexperience hadn’t led to his slightly erratic passage from mid-stretch he would have won the mile-eighth contest by further.

There is quite clearly more to come from Chad Brown’s nascent star, who has yet to explore the wider world beyond the Big A and may not do so for a while, given that his next objective will either be the Grade 3 Gotham over a mile on March 5 or the Grade 2 Wood Memorial over a mile-eighth a month later.

Early Voting’s speed figure didn’t match up to the weekend’s other big winners, but he is the least battle-hardened of them and it will be no surprise to see him move up on his third outing, whatever target is chosen for him. There’s plenty of potential there.

It’s fair to say that those behind him were no superstars, longshot runner-up Un Ojo doing best of the rest but now zero-for-three in stakes, while the five horses who came on from the Jerome – won by Courvoisier (75-1) – were beaten pointless, suggesting that they will play little further part in Derby thinking.

Saturday’s ten-point races on the Road to the Kentucky Derby are the Grade 3 Sam F Davis at Tampa Bay Downs and the stakes-level El Camino Real Derby at Golden Gate Fields. The Californian race is run over a mile-eighth on a synthetic surface and is unlikely to cause too many tremors in the Derby landscape, but the mile-sixteenth Sam F Davis is notable for the reappearance of Classic Causeway (40-1), who split Smile Happy and White Abarrio in the Kentucky Jockey Club. His main rival is likely to be the unbeaten Make It Big (50-1), who has two stakes wins to his name.

There is a blockbuster of a race in store at the Fair Grounds the following Saturday, when Smile Happy is the likely favourite in the mile-eighth Grade 2 Risen Star. His potential rivals include Slow Down Andy (45-1), conqueror of Messier in the Los Alamitos Futurity, narrow Remsen runner-up Zandon (35-1), and Lecomte second and third Epicenter (40-1) and Pappacap (50-1). The Lecomte winner Call Me Midnight (65-1) is a possible runner, although the Grade 2 Louisiana Derby on March 26 may be preferred.

The Risen Star is worth 50 RTKD points to the winner, making it more or less a ‘win-and-in’ for the Derby.

Join us at Jazzsports and make sure to stay tuned for the latest fixed horse racing odds, Kentucky Derby Future Book and racing entries.

Follow us on Social Media for instant Messier updates!