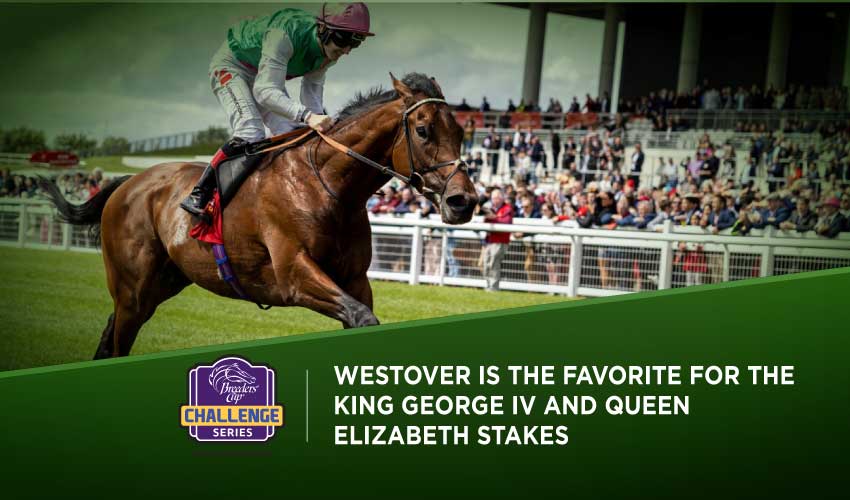 On Saturday, three Graded races are to be held at the Ascot Race Course in the United Kingdom. The 2022 King George IV and Queen Elizabeth Stakes is the real pinnacle of the card as six stars will clash in this G1 race, with the Irish Derby winner Westover being the leading chance.

And the undercard race is the two-year-old fillies G3 Keeneland Stakes, where Lezoo could achieve her premiere victory, which also applies to Zanbaq, a three-year-old filly who could shine in the G3 Valiant Stakes.

Nine two-year-old fillies will compete in this G3 turf race, offering the purse of £60,000. On the distance of six furlongs, Lezoo looks ready to shine as the Ralph Beckett bound filly has three promising starts under her belt. After bagging her debut, the daughter of Zoustar scored at the Listed level in Newmarket, upon which Lezoo aimed among the G2 competition in the Duchess of Cambridge.

15 days ago, the bay filly was prominent and in the closing stages, she lost only to Mawj. Dropping into the class should help her in achieving her premiere Graded victory.

Glenlaurel could be the biggest threat to the favorite as Kevin Ryan usually has his two-year-olds primed for great results. The daughter of Lope de Vega has hit the track just once when destroying the field in Thirsk.

On the paper, such a performance doesn’t look that appealing; however, in Saturday’s company, Glenlaurel is really considered alongside Kinta. George Boughey has sent her to two outings while the bay filly delivered two wins on the all-weather surface among novices.

Palm Lily has also prevailed on the all-weather track when scoring v Lingfield, and even though her chances aren’t as good as of her stable-mate Lezoo, she might snatch up a good place. The last to mention is Royal Charter, who triumphed in her debut thanks to a promising turn of foot.

Our pick for the Keeneland Stakes is LEZOO, which has placed at the G2 stage and has shown the biggest class of participants.

Three-year-old and older fillies and mares will line up for this G3 turf race over a mile while vying for the purse of £80,000. In the field of nine contestants, just one older participant looks interesting here – four-year-old Novemba.

The Germany-bound bay has recorded two starts in the United Kingdom. In 2021, she ran in second in the G1 Coronation Stakes and in June 2022, the Peter Schiergen-trained filly was fourth in the G2 Duke of Cambridge Stakes. Moreover, Novemba scored a G2 in Germany and took third place at the same stage in France.

The distance of mile suits her, but honestly, she’s not sporting the same form she did last season, and therefore, three-year-old Zanbaq seems to be a more likely winner. The Roger Varian-bound three-year-old entered the season with a victorious debut under her belt, and after running in third in a Listed company, she scored a small race in Haydock.

In June, Zanbaq returned to the mile distance and delivered a brilliant run in a field of 28 runners, taking second place in a treasured handicap Sandringham Stakes. If she repeats such a performance on Saturday, she could achieve her premiere Graded win, while Jumbly could benefit from the drop in the class.

The Listed winner trained by Harry & Roger Charlton finished second in a trial for the 1000 Guineas, upon which she showed up in the French 1000 Guineas and the German analogy. However, she failed to make an impression on both occasions. On Saturday, a bit smaller challenge awaits her; still, it’s difficult to picture her as the winner here, given Novemba scored the last year’s German 1000 Guineas easily while Jumbly flopped.

Oscula quite a well-known name as she recorded ten starts in 2021, scoring a G3 and placing among the elite, while in 2022, she’s been running in Listed races consistently. Besides a triumph in Carlisle, she achieved three places and could add another in this G3 race.

Kind Gesture is also an interesting participant who might cause some surprise as last time out; the Roger Varian bound filly demolished the field of a small race in Windsor by abysmal 10 lengths. Her class is questionable, yet there could be something about her.

Our pick for the Keeneland Stakes is ZANBAQ, who should use up the weight advantage over older Novemba and prevail.

The prestigious G1 turf race attracted a field of six three-year-old and older horses, competing for the purse of £160,000. Westover is the leading victory candidate to strike gold over the distance of a mile and a half because his performance in the Irish Derby was just superb.

Once Colin Keane asked the Ralph Beckett trained colt to quicken up, Westover accelerated and delivered by seven lengths; moreover, he finished third in the Epsom Derby prior to that run and prevailed in a Classic trial. The son of Frankel is a real star in the making, with another three-year-old, Emily Upjohn, being his main threat.

The John & Thady Gosden trained filly recorded three victories, including an impressive victory in an Oaks trial, and even though she subsequently lost to Tuesday in the Epsom Oaks, she still ran a great race. Her team set her a different summer goal, but due to travel complications, Emily Upjohn will take on Westover and other great horses and she needs to confirm her outstanding class on Saturday.

Otherwise, she might get swept by even by her stable-mate Mishriff. The five-year-old horse enjoyed a brilliant season in 2021, bagging the Saudi Cup, the Dubai Sheema Classic, and the Juddmonte International, yet he failed to replicate the Riyadh triumph in 2022. He got some rest and returned with a solid second place in the G1 Coral-Eclipse Stakes in July, and if he continues in such a fashion, he actually could defeat both mentioned rivals.

Pyledriver and Broome are both respected participants with lots to offer, yet in this company, they are outsiders, with the Germany bound Torquator Tasso looking ready to snatch up a place. The last year’s Prix de l’Arc de Triomphe flopped in his seasonal debut, but last time out, the Marcel Weiss trained chestnut was all class in the G2 Grosser Hansa-Preis.

Our pick for the King George IV And Queen Elizabeth Qipco Stakes is WESTOVER, as it’s difficult to see past his performance in the Irish Derby. Mishriff could be the second best.