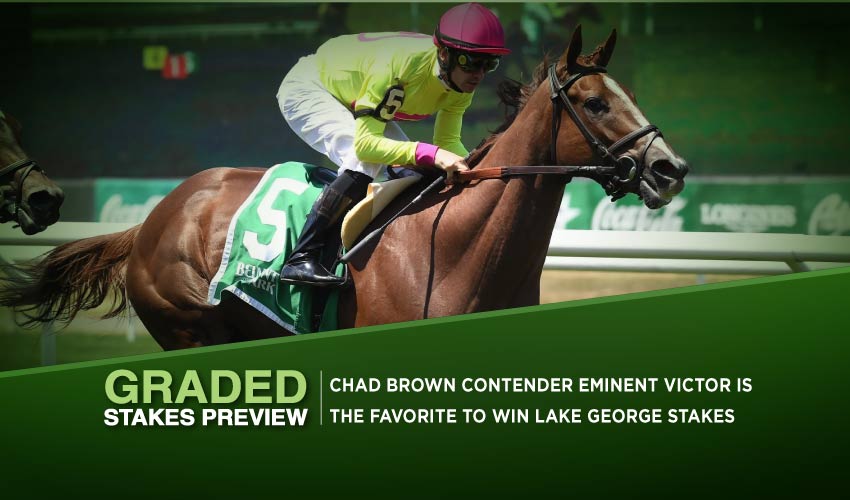 The big-league action never stops at Saratoga, and the next installment arrives on Friday with the 2022 Lake George Stakes, (G3T) in which Chad Brown has two contenders – Eminent Victor and Dolce Zel – as he bids for a record sixth victory in the mile contest on turf.

The usual suspect has dominated the Lake George in recent years, and Chad Brown bids for his fourth successive victory in the race – and his sixth overall – on Friday afternoon at the Spa.

Brown has made a fast start at Saratoga this summer and sends two to the gate, with Dolce Zel (3-1) down in grade after hitting the board on her last two starts, runner-up in the G2 Appalachian at Keeneland – in which Skims (9-2) was third, three-quarters of a length behind – and third in the G2 Edgewood at Churchill Downs.

She’s the only Graded-stakes winner in the field – G3 Florida Oaks at Tampa Bay Downs – and class relief is positive, and she may have an edge over barn mate Eminent Victor (5-2), third in the G1 Natalma at Woodbine last year and probably running near the same level when successful on her first start of 2022 in a Belmont Park stakes at today’s distance.

Another trainer doubly represented is Saffie Joseph, whose main hope may be gate-to-wire Gulfstream Park stakes winner Sister Lou Ann (12-1), who should pull out even sharper today given that was her first start off a six-month layoff.

This will be her first time away from Gulfstream, whereas barn mate Republique (12-1) has already been away from home, although she turned in an unimpressive performance when well fancied in the G3 Delaware Oaks, beaten almost 17 lengths into fourth.

The Irish import Spirit And Glory (8-1) looked nothing special in four starts on the synthetic surface at Dundalk but it was a different story on her debut Stateside, when passing seven horses in the final furlong to win an allowance optional claimer at Belmont. She cuts back a sixteenth of a mile now and takes on tougher opposition, but may well move up from that initial experience of US racing.

It’s been almost eight months since Koala Princess (9-2) finished a close-up seventh when favorite for the G1 Breeders’ Cup Juvenile Fillies Turf at Del Mar, beaten only two and a half lengths. She earned a market position for that race after winning a sprint stakes at Kentucky Downs, but form at that unorthodox track rarely translates elsewhere and she may be a little rusty today.

Heavenly Hellos (30-1) scrambled home in a minor stakes at Horseshoe Indianapolis and needs to improve plenty, while stakes debutante Al Qahira (12-1) took five races to lose her maiden tag, finally getting the job done at Churchill Downs. This looks like a tough spot and the drop back in distance may not suit her.

Chad Brown knows what it takes to win the Lake George, and his DOLCE ZEL is the choice to make the most of class relief after two solid efforts at G2 level