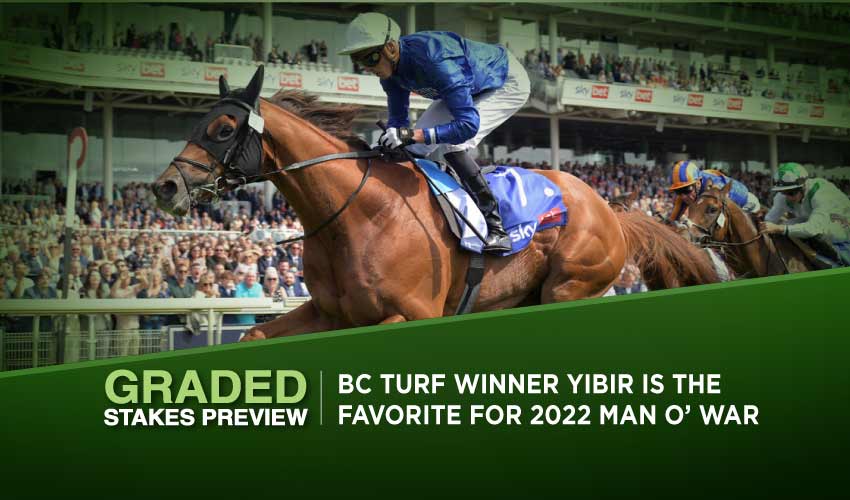 The weekend focus switches to the east coast, where the G1 2022 Man O’ War is the highlight of a stakes-heavy card at Belmont Park on Saturday. It features the return to the US of last year’s Breeders’ Cup Turf winner Yibir, who takes on main rival Gufo in what could be the first of a series of such encounters over the coming months.

The annual European assault on America’s turf races starts in earnest in the 2022 Man O’ War, the marquee event at Belmont Park on Saturday, which has drawn a contender who has already made his mark on this side of the pond.

The globetrotting gelding Yibir has hit the jackpot on both his starts Stateside, winning the Jockey Club Derby Invitational here before moving on to Del Mar to land the G1 Breeders’ Cup Turf, both victories gained in similar style with a looping run from the back to the front around the turn before a strong finish.

He’s a powerful galloper who won’t be inconvenienced by cutting back a furlong, was beaten just a neck in the G1 Dubai Sheema Classic at Meydan on his first outing of 2022, and is a long way ahead of his rivals in terms of class. However, he was unimpressive when runner-up in the G2 Jockey Club at Newmarket last month, when he got no cover in a short field, pulled hard and simply didn’t pick up. Treat that as a throw-out; he’ll be better suited by the faster early pace today.

That pace could come from So High, fifth in last year’s Man O’ War and coming here off a longshot bid to make all in an allowance at Aqueduct, where he stayed ahead until inside the last sixteenth, going under by a length and a half. The rallying Easter, on his first start in the US after a so-so record in France, was only a head behind in third place and could well flip the form, although much more is needed now.

Easter’s barnmate Highland Chief had decent three-year-old form in Britain in 2020, but has only raced twice in the last 19 months – he had wind surgery after his penultimate start – and was never sighted on his US debut in an allowance optional claimer at Aqueduct last month. On his best European form he wasn’t far behind Yibir, but that horse has improved considerably in recent months and Highland Chief appears to have regressed.

The best chance of keeping the prize at home lies with the reliable Gufo, beaten just a nose in this race last year, then a game winner of the G1 Sword Dancer at Saratoga, but later out with the washing when tenth in Yibir’s BC Turf. He bounced back when beginning his 2022 campaign in sparkling fashion, running down G3 winner Abaan to win the G2 Pan American at Gulfstream Park by two lengths, and if it’s not game-day for Yibir then Gufo – or perhaps even the stout stayer Abaan – could take advantage.

It’s hard to see past the top-class YIBIR, last year’s Breeders’ Cup Turf winner who will be much better suited by the race scenario here than he was when beaten at odds-on in Britain last time