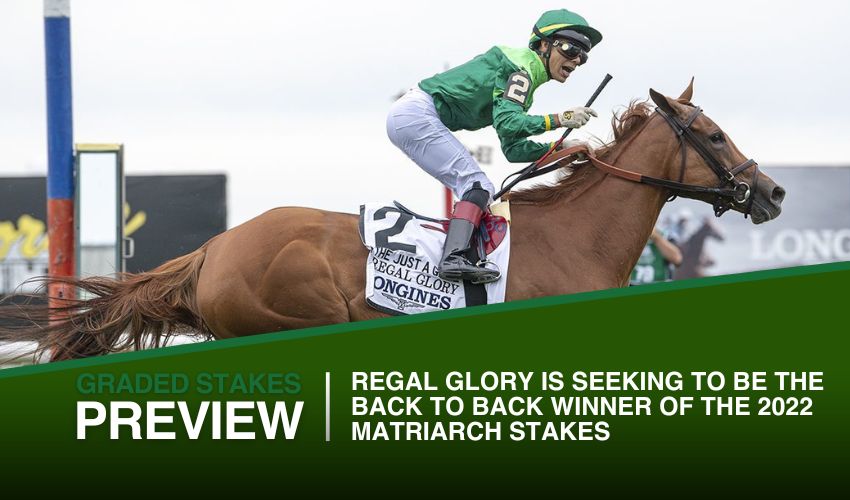 Ten runners go to the gate for the G1 2022 Matriarch Stakes on Sunday at Del Mar, and did you know that this race was first run in 1981 and the following year it was split into two divisions, and both divisions were won by the jockey Ray Sibille.

This year Rosario rides Wakanaka (5/1) for Bill Mott while the Chad Brown barn is represented by Regal Glory. Let’s look at those and the others as we try to find the winner of this years Matriarch Stakes.

To this year’s renewal, it is the Chad Brown-trained Regal Glory (8/5)who looks like being the chalk here come post time.

This daughter of Animal Kingdom is now 6 years old but has a race record of 22-12-6-0 so has only been off the board in four of her career starts. She was well beaten in the Breeders Cup Mile last time, but that came against foes that were much tougher and she had won twice and finished second twice in her previous four races, all Grade 1 events and she will prove tough to beat.

Mike Smith takes the ride on Hamwood Flier (5/1) for Philip D’Amato and this one is two from three since shipping in from Ireland. She is all about speed and will attempt to go gate-to-wire here. Her minor stakes win last time does not match the form of many of these, but she is clearly progressing and could grab a slice underneath.

We talked about Joel Rosario’s mount Wakanaka and this one has shown solid form in recent runs but still has plenty of ground to make up on Regal Glory on their running in the Just A Game Stakes at Belmont Park back in June. Regal Glory gave her six pounds that day and its level weights today so Rosario’s mount has a tough assignment today.

The three-year-old Pizza Bianca (6/1) who won the BC Juvenile Fillies Turf back in 2021 still has room for improvement and her closing stretch drive last time in the Sands Point shows she is in good shape.

If we are going to get an upset then it could come from England’s Rose (12/1) who put in a bullet 58-second workout last time and comes here off the back of a couple of board finishes in lower-level graded stakes company. She definitely looks like an improver.

The three-time stateside-raced Hamwood Flier looks an interesting contender stepping up the class ladder and she should have some tactical advantage if she can get to the speed with her customary running style. She has a great chance of reaching the board and grabbing a slice of this $400k purse.

The main selection though is REGAL GLORY who is clearly the best on Beyer speed figures, is highly consistent, and has already shown the class required to win this. She is a genuine Grade 1 performer in amongst lower-level foes and will be tough to beat.

Of the others, then Pizza Bianca and England’s Rose could be fighting it out for the minor honors.

9 foes are set to go to post for the Grade 3 Cecil B.DeMille Stakes for two-year-olds will see its 40th running on Sunday over the mile at Del Mar, a race that was named after the famous American filmmaker Cecil Blount DeMille who was a pioneer of the silent movie period from 1914 and then sound movies right up to 1958.

His grandson Joseph Harper became the CEO of Del Mar in 1990, so the family’s passion for horse racing is carried forward to this day.

This year’s event has a field of 9 that will go to post in this Grade 3 for two-year-olds and we have many that are unexposed but have already shown potential for next years, Kentucky Derby.

The early morning line chalk on the boards is Speed Boat Beach (5/2) who was an extraordinary winner on debut here at Del Mar when breaking the dirt track record and in the process producing a Beyer speed figure of 104. He showed that was no fluke when moving to turf for his second start and winning the Speak Easy Stakes at Santa Anita.

We can put a line through the last run in The Breeders Cup as he was drawn 11 of 12. The biggest negative today is the stretch-out to a mile as he shows so much speed, although he is bred to stay this far.

Ransomware (6/1) looks like an interesting contender having broken the maiden tag on his second try and he clearly enjoyed stretching out to the mile last time. Trainer Philip D’Amato has a 23% strike rate with horses that won last time so this colt has a solid chance.

Ze’bul (5/1) has only had one run and that was when closing from far back to win on debut, and in the process, he beat the previously mentioned Ransomware. He is taking a stretch-out to his first route today and comes up against winners too. However, his recent works have been sharp and with so much speed in this race, it should allow him to close late, and he is a big player in this.

The poorly drawn pair of longshots Fleet Fleet and Lloyds Logic look to have it all to do on the form shown so far, but another that should go well is the John Sadler barn inmate Game Time (6/1) who was well beaten when going sprinting on debut but has been much better over a mile the last two, including breaking the maiden tag last time.

Ah Jeez (3/1) was behind Speed Boat Beach back in October and is unlikely to turn that form around.

Speed Boat Beach looks like being the chalk here and undoubtedly is the fastest horse in the race over a sprint trip, but the question is can he stay at this route trip? He is miles ahead on Beyer speed figures and it could be that he is just too classy for these.

However, the selection goes to the unexposed ZE’BUL who also ran an extraordinary race on debut, and from a wide gate is likely to pitch inside and seek to get a stalking position behind what is sure to be a red-hot speed. With question marks on the chalk, he can close late in deep stretch to win this.

To round out exotics then Ransomware and Game Time look to be the others to concentrate on as both are improving all the time.