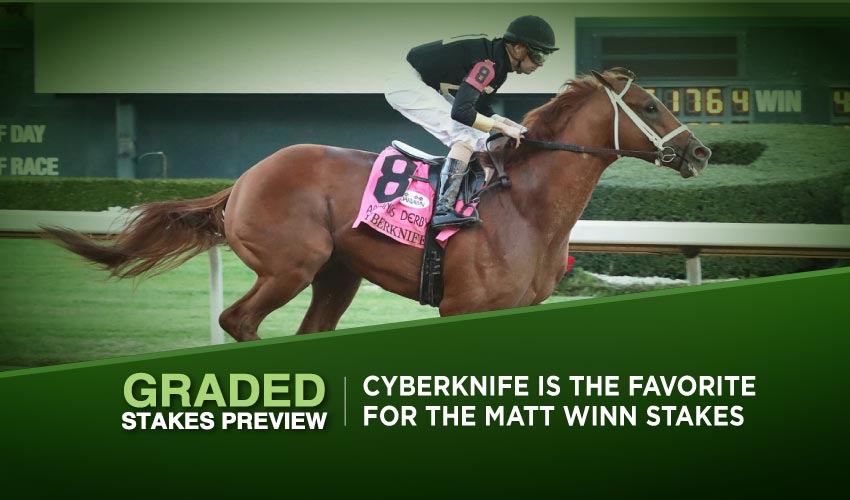 On Sunday, the Churchill Downs Racecourse offers a card, with the G3 2022 Matt Winn Stakes being the pinnacle. The dirt race is open to three-year-old colts, while the G1 Arkansas Derby victor Cyberknife  seems ready to forget the luckless run in the Kentucky Derby.

The purse of $225,000 attracted a field of seven three-year-olds who will cover the distance of a mile and a half of a furlong here. On the dirt surface, Cyberknife catches the eye at first sight in this G3 dirt event due to the fact he’s a G1 winner.

The Brad Cox bound chestnut hasn’t looked like anything special as in 2021, he won just a maiden and commenced the new season with a sixth place in the G3 competition. Subsequently, he was seen in an Allowance race where he fulfilled the role of a favourite in a fine style, and then was sent as a third chance to the G1 Arkansas Derby.

Honestly, he had a splendid gallop back then with really nothing bothering him, so once he was asked to make a move, he did it effortlessly and scored the race easily. The Kentucky Derby didn’t go well for Cyberknife as he was quick out of the gate but ran too close to the front, was drained of his energy soon, and finished eighteenth, utterly tired in the closing stages.

On Sunday, he should be already recovered from the demanding race, and if he delivers a performance similar to the one from the Arkansas Derby, he could return to the winning ways.

While Cyberknife got a crack at the Kentucky Derby, Rattle N Roll didn’t. The Kenneth McPeek colt is a G1 winner, too, as he scored the Claiborne Breeders’ Futurity, but he hasn’t been able to draw on that performance yet.

In 2022, he has four starts under his belt, including three races belonging to the Road to the Kentucky Derby, with his best result coming in the G2 Louisiana Derby, where he finished fourth. In May, he was pointed among the lesser competition of an Allowance event, and even though he was a bit unlucky, he still was expected to win. Instead, Rattle N Roll took only second place behind sovereign winner Howling Time, trained by Dale Romans.

The dark bay bagged a maiden and a Listed victory as a two-year-old, upon which he failed in all three attempts to succeed at the Graded scene. Still, if the rivals let him peacefully gallop on the front, he might benefit from it again.

The rest of the field doesn’t look dangerous for the favourite as Tough To Tame could be a decent colt, but he needs to improve once more after scoring an Allowance race, while something similar applies to Camp David.

Our pick for the Matt Winn Stakes is Cyberknife, who has shown some talent, and even though he failed in the Kentucky Derby, this company seems beatable for him.

Follow us on Social Media for 2022 Matt Winn Stakes updates!