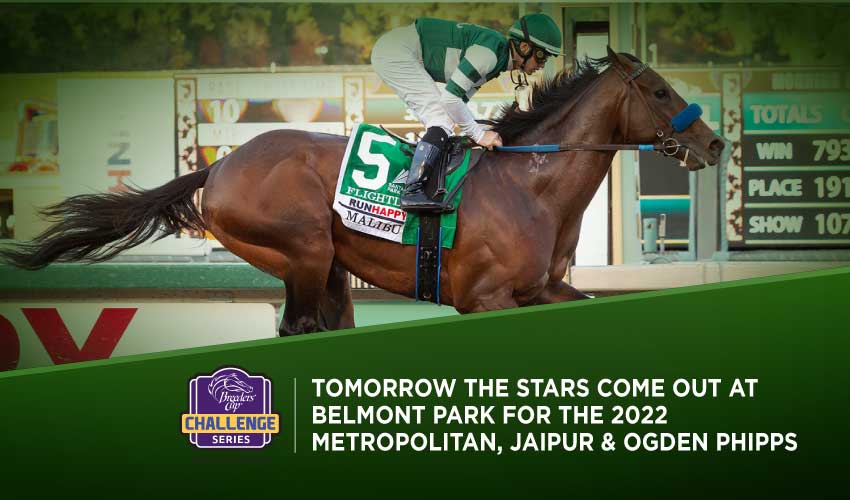 The stars come out at Belmont Park on Saturday, ready to dazzle us with their brilliance. The freakish Flightline makes his long-awaited return in the G1 2022 Metropolitan and puts his unbeaten record on the line against the fast-improving Speaker’s Corner, while the magnificent mare Letruska bids for a repeat victory in the G1 Ogden Phipps against fellow champion distaffer Malathaat, the pair having eight G1 wins between them. The G1 Jaipur lacks a stand-out sprinter, but nevertheless features last year’s winner Casa Creed taking on up-and-comer Arrest Me Red. All three races are win-and-in for the Breeders’ Cup.

The ‘Met Mile’ of glorious history, with all-timers such as Carry Back, Gun Bow, Forego, Gulch and Holy Bull on the roll of honour, is formally known as the Metropolitan and is the highlight of the undercard – and also a ‘win-and-in’ for the Breeders’ Cup Dirt Mile – at Belmont Park on Saturday. This year, there might be a winner worthy of inclusion with those great names of the past.

We have been waiting for the return of the extraordinary Flightline for months; let’s hope he is worth the wait. Flightline is unbeaten in three, has won those races by an aggregate of 37 and a half lengths, lived up to his towering reputation when blowing the G1 Malibu at Santa Anita to smithereens, leading all the way and hauling off in the stretch like a champion.

He has been so dominant that there’s not much to report other than his absolute dominance, and for pure raw ability there’s nothing to touch him. But caveats must apply: he goes beyond seven furlongs for the first time today, it’s his first trip away from the relatively shallow waters of the Californian college, and he must overcome a lengthy layoff.

Flightline is also meeting his first bona fide top-class rival in Speaker’s Corner, who has his own three-race streak to attend to after working smoothly up the ladder, winning the G3 Fred W Hooper and the G2 Gulfstream Park Mile at the Florida circuit before heading north to land the G1 Carter at Aqueduct, in which he spent most of the mile on the lead before rolling grandly to victory by four and a half lengths.

He’s never been beaten at a one-turn mile and is a guaranteed stayer, unlike the west-coast monster, and he’s also seasoned against quality opposition, which will be in his favour if it comes to a battle. Both the big two want the lead, and the early going will be crucial. It’s a hell of a horse race in store.

It speaks volumes for the prowess of the big two that their G1-winning rivals are practically ignored in the pools and in the build-up. Aloha West won the Breeders’ Cup Sprint at Del Mar by a nose, getting up to lead right on the line, but was rolled flat by Jackie’s Warrior in the seven-furlong G1 Churchill Downs on his first run of the year. He’s never gone a mile, and may not want to.

Then there’s Jockey Club Gold Cup winner Happy Saver, who has developed a nasty case of seconditis and was put back in his box by the progressive Olympiad when runner-up in the G2 Alysheba at Churchill Downs on his 2022 debut. It would be quite a surprise if he has the class to win this, but he is capable of a big show somewhere.

Boxcar longshot Informative is another of Uriah St Lewis’s frequent ‘Hail Mary’ entries and has no visible chance, although he is a G3 winner at a mile.

Speaker’s Corner is very talented and would be a worthy winner, but there could be something freakish about FLIGHTLINE and he can remain unbeaten.

Something different in the Jaipur – no bewitching match-up, no outstanding champions, but a terrifyingly competitive big-field sprint with last year’s winner out to defend his title and a free ‘win-and-in’ pass into the Breeders’ Cup Turf Sprint up for grabs.

The horse in question is Casa Creed, who made his G1 breakthrough in the Jaipur 12 months ago when rallying gamely to win by two lengths, with Gregorian Chant and longshot Greyes Creek two and a half lengths further back in seventh and eighth. The six-year-old hasn’t won since and has been stretching out to a mile, although he showed enough when fifth in the G1 Al Quoz Sprint at Meydan in March, beaten two and a quarter lengths, to suggest that there’s still sprinting fire in the grate.

The best recent form belongs to Arrest Me Red, another Wesley Ward speedball but not quite as lightning-quick as barnmate Golden Pal. He was a G3 winner over course and distance last October and upgraded on that last time in the G2 Twin Spires Turf Sprint at Churchill Downs, when he beat subsequent G3 winner Bran by a length and three-quarters, with Gregorian Chant third, Gear Jockey fourth, Chasing Artie eighth and Whatmakessammyrun tenth, less than three lengths covering that quartet.

These seasoned sprinters drift in and out of form, winning in their turn and then missing the board, but Arrest Me Red is only four and may well continue to improve on his current six-for-nine strike-rate.

Graded-stakes debutant Scuttlebuzz is going from strength to strength and brings a three-race winning streak to the table, graduating to stakes company last time over seven furlongs at this venue, building on his two victories at today’s distance in lesser grade. This is tougher but he is moving up where others have plateaued.

Thirteen months on the sidelines proved no obstacle to True Valour, who made all on his return over five and a half furlongs in a stakes at Laurel Park in April. He’ll be even sharper now, while the sole distaffer in the field is Change Of Control, who won the G3 Intercontinental (then run over seven furlongs) on this weekend last year but hasn’t recaptured that brio in four starts this year.

He isn’t the fastest in Wesley Ward’s barn, but ARREST ME RED nevertheless has bags of pace and can parlay his recent improvement into a first G1 success.

From the sublime of the Met Mile to the ridiculously good Ogden Phipps, standing out from Saturday’s blizzard of G1 races with a match made in heaven between two champion distaffers. Any of the five runners might be a worthy favourite in an ordinary year, but this ‘win-and-in’ for the Breeders’ Cup Distaff is something different, a race in which G1 winners find themselves in longshot territory.

The only place to start is with the mighty Letruska, champion older female with a public following to match her ability and her remarkable 19-for-25 resume, adorned by five US G1 wins including this race last year, in which she led throughout as ever and beat the rallying Bonny South by two and three-quarter lengths.

Without the throwout BC Distaff, in which she dropped right away after getting tangled up in a suicidal speed duel, Letruska is unbeaten in her last seven starts and proved she was as good as ever this year when rolling majestically to victory in the G1 Apple Blossom at Oaklawn Park, gate to wire to beat Clairiere – arguably running the race of her life in defeat – by a length and a quarter while spotting her 3lb.

Letruska will be on the lead again, setting fractions that take the opposition out of their comfort zone, and she always has plenty left for deep stretch. This time she’ll need those reserves, because the queen faces a new pretender to her crown in last year’s champion three-year-old filly Malathaat, who owns an equally remarkable seven-for-nine record and will be coming at the favorite late.

Malathaat dominated the sophomore ranks last year with three G1 wins including the Kentucky Oaks, turning back Search Results to get it done by a neck, and later emerged from the wreckage of that speed-cursed BC Distaff to claim third place, the first three-year-old home, three-quarters of a length behind Japanese longshot Marche Lorraine and a head in front of Clairiere in fourth.

In the same way that Letruska has the Indian sign over G2 winner Bonny South, having beaten her three times in 2021, Malathaat has a hex over G1 Cotillion winner Clairiere, finishing ahead of her four times last year. Clairiere is progressive but lacks the snap and sizzle of the big two.

Malathaat’s reappearance victory in the G3 Doubledogdare over a mile-sixteenth at Keeneland didn’t convince every observer, she made beating Bonny South by three-quarters of a length look quite hard work, but it will have tuned her up to concert pitch for the toughest test she has ever faced, especially as this distance is her bare minimum.

Search Results won the G1 Acorn on this day 12 months ago and has her share of speed, demonstrated when winning the G2 Ruffian over a mile here last month by three widening lengths. This is far tougher, and she looks vulnerable both to Letruska’s early grinding speed and Malathaat’s late rush.

A star-studded field, but the brightest of those stars is the champion LETRUSKA, whose powerful front-running game can bring her yet another G1 victory.

Follow us on Social Media for 2022 Metropolitan & Win and You’re In updates!