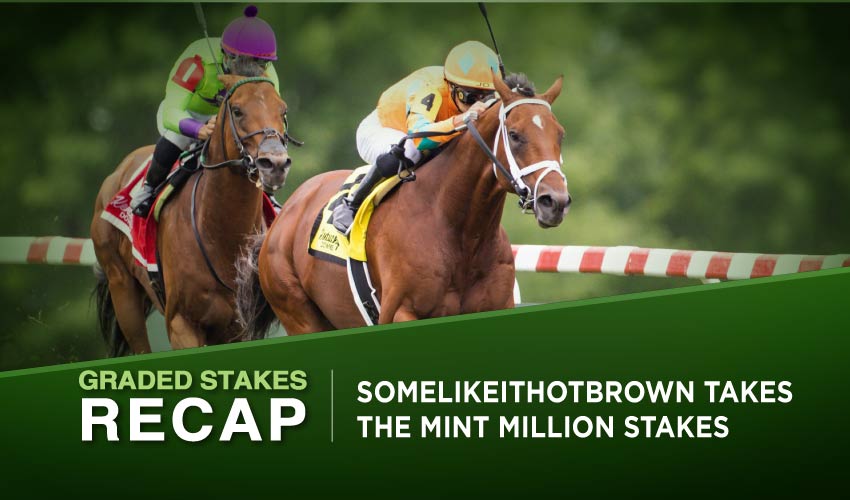 The Saturday card at the Kentucky Downs Race Course offered highly attractive Graded events, and we discuss four of them in this article. At first, Somelikeithotbrown improved his last year’s second place in the 2022 Mint Million S and bagged it before Atone.

Grey Dalika then drew on her G1 triumph and scored the G3 Ladies Turf Stakes, bettering preferred Prince Grace once again, upon which Campanelle just narrowly fulfilled the role of a favorite in the G3 Ladies Sprint Stakes. At the end of the card then, the grandstands witnessed One Timer causing an upset among three-year-olds who clashed in the G2 Franklin-Simpson Stakes.

The rescheduled G3 race was open to three-year-old and older horses who covered the distance of a mile. On the turf surface, the participants vied for the purse of $1,000,000 in a field of eight. Somelikeithotbrown (23-10) had the best start of all and aimed for the lead. Under Jose Ortiz, the six-year-old horse set the pace and looked quite fresh even when turning for home when Atone (33-10) attempted to challenge him.

For a brief moment, Atone seemed to become a fierce opponent for Somelikeithotbrown; however, the Michael Maker bay found enough power to draw clear from him and score the race by one and ¼ of a length. He crossed the wire in 1:33.88, followed by Atone, who only narrowly secured second place before third Mr Dumas (7-1).

The victorious son of Big Brown has been a great servant to the connections, bagging two G2 races and placing in numerous Graded events, while on Saturday, he showed a great effort in the Mint Million Staks once again. In 2021, he finished second, so he was quite expected to put up a brave performance also this time, which he did and built on his recent victory in a Listed.

Atone delivered a solid run, too. He galloped in second close to the leader; however, he could not actually get in front of the pacesetter at any given moment. In the final furlong, he had to fight even for second place by finishing Mr Dumas, but in the end, he bettered him by a nose. Fourth Field Pass (15-1) wasn’t far away as well, with Gray’s Fable (19-1) taking fifth place. The second chance of the race, Pixelate (3-1), didn’t display anything interesting at all and had to settle for sixth place, which was quite disappointing, given the bay score the last year’s Mint Million Stakes.

This G3 turf race unfolded almost identically to the above-discussed event. Seven three-year-old and older fillies and mares covered the distance of a mile here while competing for the purse of $550,000, and it was the front-running Dalika (51-20) who struck gold.

The six-year-old grey sprinted out of the gates and settled in the first place, where she remained until the final stretch. Under Brian Hernandez, she waited for Princess Grace (2-1) to challenge her, and once the favorite did, Dalika caught up with her once again, fought bravely, and delivered a fine victory in 1m 33.53s. The Albert Stall jr. bound mare triumphed by a neck before Princess Grace, with Market Rumor (151-10) snatching up third place.

Although being a six-year-old, Dalika has only now reached her career peak. The German-bred daughter of Pastorius was earning some money, especially at the Listed and the black-type scene in the past, yet she also managed to finish second in the G2 Mrs. Revere Stakes in 2019. She had to wait for a Graded breakthrough until the summer of 2021 when the grey bagged the G3 Robert G. Dick Memorial Stakes, upon which she was second in the last year’s Ladies Turf Stakes, while in the ongoing season, Dalika’s form even improved.

At first, she amassed second place in a G3 and fifth among the elite, and in August, she was absolutely brilliant in the G1 Beverly D. Stakes where she defeated Princess Grace, who was the preferred for Saturday’s race. She was really expected to turn the tables on Dalika; however, the grey simply enjoyed herself, galloped with enthusiasm, and looked ready to defeat anybody closing on her. Therefore, Princess Grace had to settle for second in front of a trio of rallying rivals – third Market Rumor, fourth Henrietta Topham (126-10), and fifth Sunny One (169-10).

This G3 turf event for three-year-old and older fillies and mares should’ve been a good display of the favorite’s ability; however, Campanelle (4-5) managed to score over the trip of six and a half furlongs only narrowly. Piloted by Irad Ortiz, the four-year-old was the obvious first chance in this $550,000 and traveled in fourth place, upon which the jockey urged her to take command in the final stretch.

The Wesley Ward bound filly did so, but she found a tough rival in Bay Storm (132-10), running at the fence. Although she carried a bigger weight than the favorite, she fought so bravely that Campanelle had to try hard until the very end to score by a nose. Crossing the wire in 1m 14.57s, she prevailed over Bay Storm, while She Can’t Sing (33-1) defied the odds to grab third place.

Campanelle, the daughter of Kodiac, has been an awesome sprinter since the beginning of her career, given she bagged the G2 Queen Mary Stakes and G1 Prix Morny as a two-year-old. She returned to Europe also in 2021 to win the G1 Commonwealth Cup among three-year-olds, and even though she had to wait for another victory until April 2022, she affirmed to be still capable of big runs when she finished third in the G1 Platinum Jubilee Stakes at the Royal Ascot meeting.

Therefore, Campanelle should’ve scored the Ladies Sprint Stakes because she was basically class apart from the rest of the field, yet Bay Storm just didn’t want to give up in the closing stages. The four-year-old spent the race in third and then had enough space to rally forward, which she did, and got beaten only by a nose. After she scored a black-type race last time out, she needs to be also respected at the Graded scene, which she affirmed by this bold run. She Can’t Sing took third place but lost by three lengths to the second filly, with Brooke Marie (218-10) running in fourth ahead of Jouster (78-10).

The biggest surprise of these four races we’re covering in this article occurred in the $600,000 G2 event over six and a half furlongs as outsider One Timer (20-1) caught off guard every single one of his rivals. On the turf surface, the three-year-old bay bolted away from the gates, set a swift pace under E. T. Baird, and once the gelding hit the final stretch, nobody was capable of getting closer to him. One Timer utterly destroyed the field of three-year-olds and scored the race by four and ¼ of a length in 1m 14.59s. Run Curtis Run (185-10) delivered a finish at the fence to secure second place in front of favorite Big Invasion (4-7), rallying on the outside.

One Timer definitely belonged among the less anticipated runners in the Franklin-Simpson Stakes as the Larry Rivelli bound gelding didn’t hint that he was a Graded victory in the making. The son of Trappe Shot scored Listed and black-type races, indeed, and looked interesting as a two-year-old; however, he failed to impress in the G2 Breeders’ Cup Juvenile Turf Sprint. In 2022, he started off again at the black-type stage where he was successful; subsequently, he finished second at the same level, but last time out, One Timer didn’t stay the trip and trailed home in last place. He should’ve benefited from the drop in the distance, yet he wasn’t expected to put up such a commanding performance, and we’re curious whether he’ll be capable of repeating it or whether it was just a fluke.

Without a doubt, One Timer outshined all of his Saturday rivals, but Run Curtis Run delivered a solid run in second and looks like a fine Graded performer alongside Big Invasion, who was too distant from the front when turning for home to actually threaten the victor. Therefore, he suffered his first loss after bagging six wins in a row; still, he remains promising for future races. Asymmetric (84-10) had to settle for fourth place, while Heaven Street (48-1) and Stitched (203-10) both ran in fifth in a dead heat.