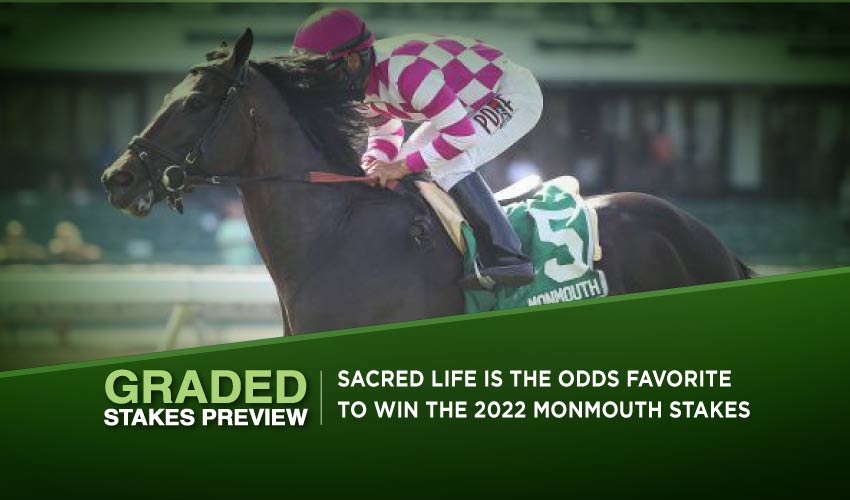 All the limelight at Monmouth Park on Saturday will be shining on G1 regular Hot Rod Charlie, who drops down two rungs to the G3 Salvator Mile after finishing runner-up in the Dubai World Cup last time. Chad Brown will have, as ever, a major say in the turf races, with Fluffy Socks (G3 Eatontown) and Sacred Life in 2022 Monmouth Stakes morning-line favorites to continue his recent sizzling run.

The stand-out star at Monmouth Park on Saturday is the A-lister Hot Rod Charlie (4-5), who makes his homecoming in the Salvator Mile after a successful stint at Meydan.

His G1 record reads Pennsylvania Derby winner, Belmont runner-up, Kentucky Derby third, and Breeders’ Cup Classic fourth, and he proved he had retained all his ability when rallying strongly to be runner-up in the G1 Dubai World Cup in March, beaten a length and three-quarters by Country Grammer.

If class alone was the requirement then Hot Rod Charlie would be a mortal lock in this company, but he is coming off an arduous travel schedule and hasn’t run over this short a distance since his two-year-old days. He may well overcome these obstacles, but conditions aren’t ideal.

That goes too for Shirl’s Speight (6-1), who has shown high-class form on turf this year – winning the G1 Maker’s Mark Mile at Keeneland, fourth in the G1 Turf Classic at Churchill Downs – but now tries the main track for only the second time in his life, and the first time didn’t go so well. The return to a mile is in his favor but the switch in the surface is a big question mark.

The G1 stalwart Mind Control (3-1) won the G2 John A Nerud over seven furlongs at Belmont Park last year and that’s probably his preferred distance, although he did win a stakes over a mile at Parx Racing in September.

A never-dangerous longshot fifth place in the G3 Pimlico Special on his Graded debut suggests that Mohaafeth (20-1) may not yet have the skill-set for this level, while last year’s Kentucky Derby eighth Helium (8-1) has been beaten in lesser grade at Charles Town and Woodbine on his last three starts and will find this much tougher.

Phat Man (5-1) was third in the G3 Philip H Iselin here in August but is inconsistent and unlikely to find improvement at the age of eight.

There are concerns about HOT ROD CHARLIE at this distance, but he is by some way the best horse in the race and can make his big class edge count.

Three trainers are doubly represented in the Eatontown and it’s no surprise that Chad Brown, who has a seemingly bottomless reserve of turf distaffers, is one of that trio.

His pair is led by Fluffy Socks (3-1), who probably ran a career-best last time when runner-up to subsequent G1 winner Bleecker Street in the G2 Modesty at Churchill Downs, beaten just a half-length. Already a G2 winner from last year’s Sands Point at Belmont Park, she is preferred to barn mate Lemista (4-1), fourth in the G3 Beaugay at Belmont last time but zero-for-four since emigrating from Ireland, where she too was a G2 winner.

Shug McGaughey’s main hope is last year’s winner Vigilantes Way (7-2), who has a two-for-four record at this track and won the Eatontown well 12 months ago, although today’s race appears stronger. Her barn mate Stolen Holiday (6-1) was sixth in that Beaugay, a length, and three-quarters behind Lemista, on her Graded-stakes debut and may not yet be ready for this level.

Michael Stidham’s duo is led by Princess Grace (7-2), who has been on the bench since running third behind the much-improved Regal Glory in the G1 Matriarch at Del Mar in November. She may lack a little race sharpness, while barn mate Alms (6-1) also saw the back of Regal Glory when runner-up to that mare in the G3 Pegasus World Cup Filly & Mare Turf, fine form but she is nevertheless riding an eight-race losing streak stretching back to February 2020.

Whimsical Muse (10-1) is ready for this move up after making her stakes breakthrough over course and distance last month, beating the rallying Vigilantes Way by a neck with Por Que No (20-1) two and a quarter lengths back in fifth.

Her form behind her rampant barn mate Bleecker Street is about as good as it gets in this division, and FLUFFY SOCKS can take advantage of this class relief.

The Monmouth is a story of quantity over quality, with several of the runners out of form and others coming back after long layoffs.

Public Sector (7-2) is expected to run at Belmont Park on Saturday instead, leaving barn mate Sacred Life (3-1) to fly the flag for Chad Brown. Sacred Life is a solid campaigner and won the G3 Knickerbocker at Belmont Park last fall – Epic Bromance (20-1) last of nine – while last time out he took the silver medal in the G2 Fort Marcy at the same circuit, battling on late to pass Glynn County (12-1) – who is zero-for-eight in stakes – close home and beat him by a half-length.

Yes, This Time (5-1) was slightly disappointing when fourth in a stakes here over a mile-sixteenth, with Oceans Map (20-1) a neck away fifth and Mohs (20-1) another five and a half lengths back in seventh, and seems to have plateaued since winning the G3 Kent at Delaware Park a year ago.

Queen’s Plate winner Safe Conduct (15-1) hasn’t been able to translate that top Woodbine form into results below the border, but figures to be a pace angle and could be a threat if allowed his own way in front.

It’s been nearly 11 months since we saw Ever Dangerous (6-1), but that wasn’t a bad effort behind L’Imperator in an allowance optional claimer at Saratoga and if he’s ready to rumble could be in the mix, while Tax (12-1) has been off even longer, since January 2021, so there’s no guarantee he can rediscover the verve that brought him the G3 Harlan’s Holiday at Gulfstream Park on his penultimate start.

This won’t take much winning, and the consistent EVER DANGEROUS is the selection in the hope that he can recapture his decent form following a long layoff.

Raise your winning opportunities with our Horse Betting Guide. We have a guide for all levels! Beginners betting guide, Intermediate and Handicappers!

Follow us on Social Media for 2022 Monmouth Stakes odds & updates!