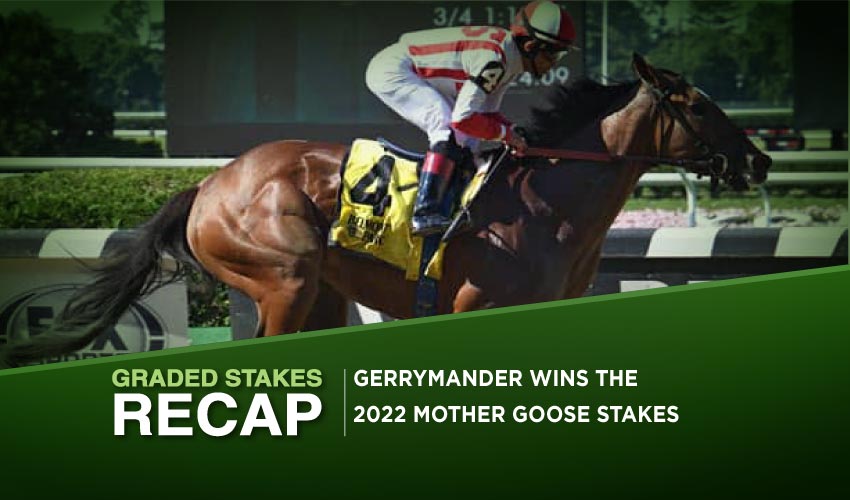 Brad Cox was the man of the hour this weekend, winning two of the three Graded stakes run nationwide. His rocket-powered sprinter Lady Rocket went gate-to-wire to win the G3 Chicago at Churchill Downs, while at Thistledown he sent out Kentucky Derby seventh Tawny Port to take the G3 Ohio Derby. In New York, local hero Chad Brown welcomed home yet another big Saturday winner when Gerrymander made short work of a short field in the G2 2022 Mother Goose Stakes.

Gerrymander gets the vote | G2, $250,000 | 1m 1/2f, 3yo fillies | Belmont Park
On one hand, it was a bit of an upset, but on the other, there was absolutely no surprise about Chad Brown winning another big Saturday race, this time with Gerrymander in a short-field Mother Goose, the main event at Belmont Park.

As expected, the pace came from odds-on favorite Juju’s Map after a dawdling first quarter during which 6-1 third-choice Gerrymander was a reluctant leader, but the script was torn up as they turned for home when Gerrymander swept to the lead in the center of the track.

As her pursuers weakened, she cleared away to win by an easy three lengths from Shahama, with Juju’s Map running the worst race of her career in third, another four and three-quarter lengths away. The clock showed 1:43 and four-fifths.

“It looked like they were in a hurry a little bit early, so I just took my time,” said jockey Joel Rosario. “Then it set up well and she managed to get the jump on them out of the turn, and it worked out good for us.”
This marked a return to form for the daughter of Into Mischief, who had disappointed on her 2022 debut when only sixth in the G2 Eight Belles at Churchill Downs, and was her first victory at Graded level. She is now three-for-six and has never finished worse than second in four races at Belmont.

Gerrymander is a half-sister to Lone Rock, winner of a G2 at Del Mar over a mile and five-eighths, and the expectation is that she’ll also be comfortable stretching out, although not quite that far. Her main summer target is the ten-furlong G1 Alabama at Saratoga on August 20, and she may run again before then.

“I figure there are some similarities between the two siblings, and a mile and a quarter is not out of the question,” said Brown, who won the Alabama three years ago with Dunbar Road, who had won the Mother Goose on the way.

The five-year-old was the only pace angle in the race and she made it count, breaking on top under Ricardo Santana and playing catch me if you can with her six rivals.

The 7-2 fourth-choice on a tightly contested tote board was in charge all the way down the stretch, turning back the lukewarm challenge of the favored Sconsin to win by two and three-quarter lengths, in a time of 1:21 and three-fifths. The late-running Bell’s The One got up for third, a further length and a half away, while second-choice Pennybaker was a never-in-it sixth of seven.

“Her best weapon is her speed, and she broke well from the gate and took me right to the front,” said Santana. “She relaxed on the front end, was able to save energy before the stretch, and was able to hold off everyone.”

Victory moved Lady Rocket’s wins/runs ratio to 50 percent, seven-for-14, and was her second success at this level following last year’s G3 Go For Wand at Aqueduct. On her previous start, she had found the mile of the G2 Ruffian at Belmont Park stretching her stamina to breaking point, a factor alluded to by trainer Brad Cox in his post-race debrief.

“I was impressed she was able to hold her speed at seven furlongs,” he said, after winning his second Graded stakes of the afternoon nationwide. “I think she may be best at six and a half furlongs; Ricardo gave her a breather up the backstretch and I think that helped her to hold them off.”
The next big target for Lady Rocket is likely to be the G1 Ballerina at Saratoga on August 28, another seven-furlong contest.

Tawny finally gets his Derby | G3, $500,000 | 1m 1f, 3yo | Thistledown
He had been the best of the three horses coming on from the Kentucky Derby and on Saturday Tawny Port came out best again in the Ohio Derby, the annual highlight at Thistledown.

Kept away from the early speed of longshot Pineapple Man and Classic Causeway, Tawny Port made his move around the turn and at the top of the lane the three Kentucky Derby horses – Tawny Port on the outside, Classic Causeway on the rail, and White Abarrio splitting the two – were lined across the track, the race between them.

Tawny Port soon asserted and the 6-5 favorite turned his challengers back under a strong stick ride from Irad Ortiz, crossing the line a length ahead of second-choice White Abarrio, stopping the clock in 1:50 and two-fifths. Classic Causeway, having his first start for trainer Kenny McPeek, faded in deep stretch but held on to the bronze medal, a length and a quarter further back. The disappointment of the race was third-choice Ethereal Road, who never figured and trailed in a sixth of seven.

This was the second Graded success for the Brad Cox-trained Tawny Port following his score in the G3 Lexington at Keeneland in April, and he is now four-for-seven lifetime. Prior to that Keeneland win, Tawny Port had shown his best form on the synthetic surface at Turfway Park, winning two of three, but he now seems perfectly at home on the main track and will head back into top company later in the summer.

Follow us on Social Media for 2022 Mother Goose Stakes updates!