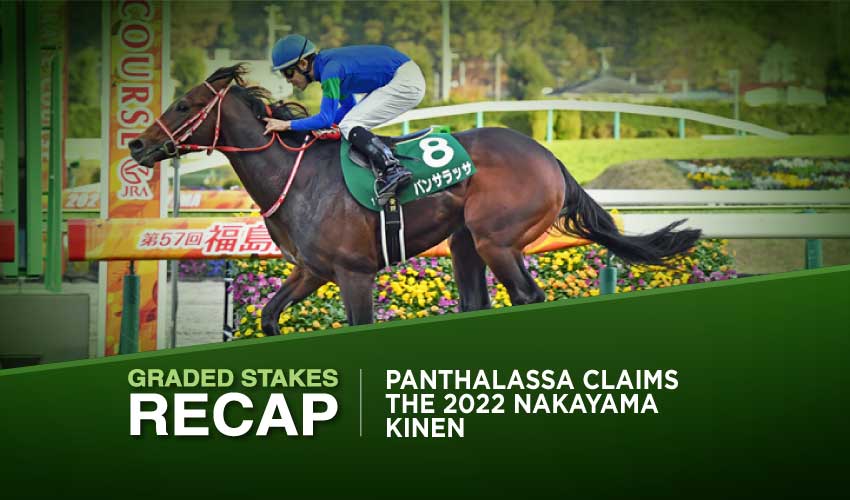 The Japanese horse racing featured a couple of Graded races in the past weekend, while neither of them saw a huge surprise. At the Chukyo racecourse, Diatonic held off Travesura in the G3 Hankyu Hai over seven furlongs, upon which Panthalassa was the runaway winner of the 2022 Nakayama Kinen at the Nakayama Racecourse. The five-year-old horse simply didn’t give any of his rivals a chance, scoring easily there before reliable Karate.

The turf G3 race, offering the purse of 82,520,000 Yen, attracted a field of 14 four-year-old and older horses, including seven-year-old Diatonic (21-10), who fulfilled the role of a favourite. After finishing third in last year’s Hankuy Hai over 7 furlongs and taking the same place in the G1 Takamatusnomia Stakes, the Takayuki Yasuda delivered two fine results but also failed to show anything interesting three times in a row subsequently. Still, he commenced the new season in a promising way, which he confirmed on Saturday also by being quite enthusiastic from the very beginning.

Under Yasunari Iwata, the fresh-looking bay was quick out of the gate, going for the front right away only to be settled in second place soon; Diatonic waited for his moment in the final stretch. As the leader weakened, the favourite used the gap at the fence, rallied forward, and galloped boldly towards another G3 victory of his career. Seven-year-old Travesura (158-10) indeed kept closing on him with each stride; still, he couldn’t get in front of Diatonic, losing to him by a neck. The preferred bay crossed the wire in 1m 19.90s. From the rear of the field finishing, Travesura also used a spot at the fence to charge forward and therefore easily left behind third Sunrise Hope (112-10).

Going strongly in the closing stages, Relationship (119-10) snatched the fourth place in front of Grey In Green (42-10), charging from the utter outside.

The G2 turf race held at the distance of a mile, and a furlong morphed into a one-horse show right at the beginning when five-year-old Panthalassa (17-5) moved to the front.

The Yoshito Yahagi trained horse belonged among the leading victory candidates in this 129,320,000 Yen race for four-year-old and older horses; however, nobody could’ve expected such a spirited performance from this smart bay. He indeed failed to impress in the G1 Arima Kinen, still, he had Listed and G3 wins under his belt, so jockey Yutaka Yoshida must’ve believed his mount enormously when he allowed him to show the way from the gate to wire, moreover, with quite an advantage over his rivals. However, when Panthalassa reached the final stretch, and some of his opponents commenced their attempts to get close to him, they were simply too distant from the leader who comfortably galloped towards his premiere G2 victory in 1m 46.40s.

Six-year-old Karate (57-10) was the best of the rest as the reliable bay finished from the midfield and using the outside track, he successfully ran down the whole field to secure second place in front of Admire Hadar (9-2).

A hugely anticipated outing of G1 winner Danon The Kid (8-5) resulted in only seventh place as the four-year-old bay spent the initial part of the race at the rear and probably used too much energy to improve his position in the backstretch. Nothing more came from him as he went in one pace since turning for home.

Sign up to get our daily horse racing news and become a winner. Check for more information about Horse racing odds, racing entries, and races results.

Follow us on Social Media for 2022 Nakayama Kinen updates!