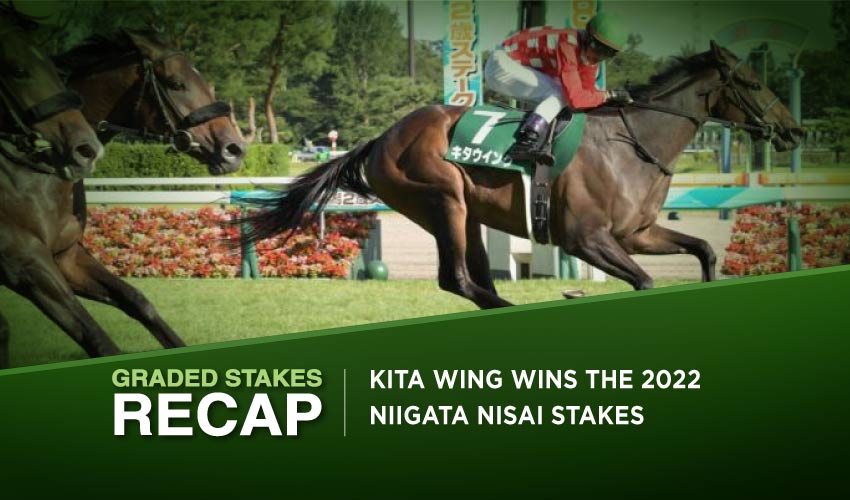 On Sunday, two G3 turf races were held at the Japanese Race Courses. Two-year-olds showed up in the 2022 Niigata Nisai Stakes in Niigata, where the favorites were outshined by Kita Wing, finishing from the rear of the field. Among three-year-old and older sprinters, Vento Voce finally struck gold at the Graded stage when delivering in the Keeneland Cup in Sapporo.

Eleven two-year-olds lined up for this G3 turf race, offering the purse of 59,150,000 Yen. None of the favorites struck gold over the distance of a mile as it was Kita Wing (71-10) whose finish proved to be the best of all.

The Shigeyuki Kojima bound filly galloped in the second half of the field, and it took her some time before she even looked like she should impact the race.

Under Keita Tosaki, she improved her position eventually and continued to pass her rivals by until she took command, thanks to her powerful turn of foot. She crossed the wire in 1m 35.90s, leaving Win Odin (39-10) in second by half a length, with Sea Wizard (3-1) grabbing third place.

The victorious daughter of Danon Ballade has hit the track two times before being aimed at the Niigata Nisai Stakes. After finishing fourth in her debut, she scored a maiden over a mile and achieved another success on Sunday in front of bravely going duo Win Odin – Sea Wizard.

The latter was the first participant who passed by leaders in the final stretch, looking ready to deliver a fine victory here; however, not only Kita Wing but also Win Odin came with the eye-catching turn of foot. Therefore, Sea Wizard had to settle for third place, while preferred Ice Green (29-10) couldn’t get past fifth place.

Fifteen three-year-old and older sprinters clashed in this 82,610,000 Yen G3 race over six furlongs, where it once again showed how it’s important to draw well in such short races.

Once the field turned for home on the turf surface, it was Vatreni (68-10) who suddenly grabbed the lead as he copied the fence, ensuring himself a fine third place. Win Marvel (5-1) also had a good trip and finished strongly; however, he couldn’t keep up with Vento Voce (113-10) and his powerful turn of foot.

The robust five-year-old trained by Mitsunori Makiura picked up in the final stretch and guided by Christophe Lemaire, Vento Voce triumphed by half a length in 1m 9.10s. Win Marvel was second.

Basically, the first three horses to cross the wire enjoyed a trip near the fence and didn’t waste their energy on turning wide, as especially Vatreni proved it almost in a perfect way.

Of course, he finished third, but it was obvious he used his position unlike some of the preferred horses, including fourth Toshin Macau (14-5) who couldn’t finish better because of the unfavorable journey throughout the race.

Christophe Lemaire did the best he could with Vento Voce, and it showed as, after some failed Graded attempts, the son of Turtle Bow finally bagged a G3 triumph, being pushed forward by Win Marvel in the last few strides.