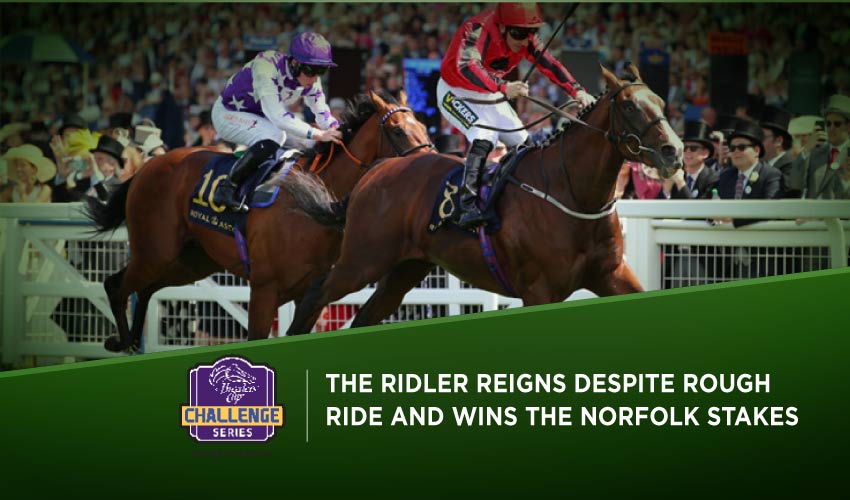 The outcome of the 2022 Norfolk Stakes, the marquee two-year-old contest at Royal Ascot on Thursday and a win-and-in race for the Breeders’ Cup, was mired in dispute after longshot The Ridler prevailed despite causing severe interference to the placed horses inside the final furlong. The track stewards allowed the result to stand but banned winning jockey Paul Hanagan for ten days.

Controversy stalked the pristine lawns of Ascot on Thursday when the 50-1 longshot The Ridler was confirmed the winner of the Norfolk – and beneficiary of the win-and-in free berth to the G1 Breeders’ Cup Juvenile Turf Sprint at Keeneland in November – after a chaotic finish in which he badly interfered with the third and fourth horses.

The rank outsider, the longest-priced winner in the race’s history, came home a length and three-quarters ahead of the favorite Walbank, who was, in turn, a neck ahead of Crispy Cat in third. The time for the flying five on fast turf was a minute and a half-second.

That’s what goes in the record books. What won’t be mentioned here is the ride given the colt by former champion jockey Paul Hanagan, who delivered a performance that would have shamed the rawest bugboy by allowing his mount to drift left across four horses in the final 150 yards, squeezing out Crispy Cat and bumping fourth-placed Brave Nation, only straightening up before he reached Walbank and then winning going away.

In the US, The Ridler would have been disqualified. The rules are different in Europe, where priority is given to the winner and not to the horses subjected to interference, and where unless the margin of victory is a nose or a head there is practically no chance of a rogue winner having his number taken down.

This has resulted in a win-at-all-costs mindset among jockeys, particularly in major races, with riders breaking the rules to win knowing their horse is almost certain not to be disqualified, and taking any suspension as merely an occupational hazard. The Ridler kept the race, as was widely predicted by pundits, while Hanagan received a ten-day suspension.

“I definitely deserved a ban, without a doubt, but I did think ten days was a bit harsh,” said Hanagan.
Celebrity soccer agent Kia Joorabchian, the majority owner of Walbank and Crispy Cat, had a different outlook. “Crispy Cat got completely wiped out. If you lose fair and square that’s fine, but for an experienced jockey to wipe out four horses in the field, I don’t even know what to say to that.”

The incident overshadowed the hugely improved performance of The Ridler, a son of Australian sprinter Brazen Beau, who was taking his record to two-for-four and providing trainer Richard Fahey with back-to-back victories in the Norfolk.

“I didn’t think he should have been a 50-1 chance,” said Fahey, a master with speed horses. “He’s a good tough horse, and we’ll think about trying six furlongs.”

Fahey’s 2021 Norfolk winner Perfect Power went on to run in the G2 Richmond at Glorious Goodwood in July and the G1 Morny at Deauville in August, both over six furlongs, so a similar campaign is likely for The Ridler.

Follow us on Social Media for the 2022 Norfolk Stakes Recap & updates!