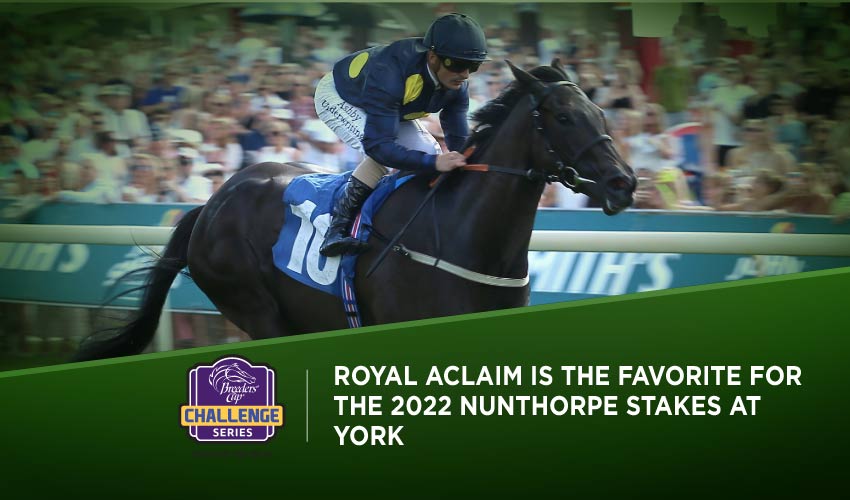 This Friday at the Ebor Festival is arguably one of the most exciting days in the entire racing calendar. With three fantastic races, we preview the Group 2 Lonsdale Cup, Group 2 Gimcrack Stakes and Group 1 Win and Your’re In 2022 Nunthorpe Stakes.

Here is everything you need to know.

The highlight of the day is the G1 2022 Nunthorpe Stakes. Raced over the minimum distance of five furlongs, fifteen horses are set to head to post.

In a wide-open sprint, there is value everywhere you look. Leading the betting is the James Tate-trained Royal Aclaim. Unbeaten in his three career starts, he was mightily impressive when landing Listed honours last time out. He takes a huge step up in class here but is certainly one to seriously consider.

Khaadem is a fascinating horse. Hugely talented, injuries have curtailed which could have been a glittering career. Managed expertly by trainer Charlie Hills, Khaadem has won his last two starts at Grade 2 and Grade 3 level. He has run well at this level before and could be a huge danger to all.

Hollie Doyle has had a memorable year, winning her first classic and making a strong case for rider of the year honours. Here she rides The Platinum Queen who is trained by Richard Fahey.

The Platinum Queen has won her last two starts convincingly but is another taking a huge leap in class. She is not out of place in this field and with the superb Doyle on board is sure to give the favourite a run for his money.

An interesting horse at an attractive price is Raasel. Raasel finished second to Khaadem in the Group 2 King George Qatar Stakes but had he not met trouble in running he easily could have won.

That run was more than credible and he is a Grade 3 winner in the past. At a bigger price, he can play a part in proceedings.

This race is a tricky one to predict. With all fifteen runners in with a chance of victory, there is value everywhere you look. The Platinum Queen was an easy winner last time out and she could take the step up in class in her stride and could be the one to be on.

One of the most prestigious two-year-old races in the world is the Gimcrack. Previously won by classy horses such as Blue Point and Threat, twelve horses will head to post for this year’s renewal.

Heading the betting is Royal Scotsman. Trained by Paul Cole, he has won two of his four starts including the Group 2 Richmond Stakes in which he was a dominant winner.

It’s right that he starts the race as favourite and he could well be the horse to beat.

Trying to beat Royal Scotsman is the unbeaten Marshman. A winner of his two career starts, he was mightily impressive when winning his last race in maiden class. Whilst he is taking a big step up in class, he shouldn’t look out of place and could run a really big race.

Another horse who will arrive unbeaten is Noble Style, who runs for trainer Charlie Appleby. His win in novice class last time out was gutsy, but Appleby knows how to ready one for the big day and he certainly can’t be discounted.

The third unbeaten horse to enter the race is Clearpoint who is trained by Richard Fahey. The form of his victories isn’t the strongest but he has still got the job done convincingly. Fahey knows how to win this race after winning it in 2017 and he has a good chance of winning once again with Clearpoint.

At a large price, Never Just A Dream is an intriguing runner. He bounced back impressively after a really poor debut run to win second time out. That win came on the all-weather and it will be interesting to see if he can translate his new form back onto turf.

Whilst Royal Scotsman deserves his chance at the top of the market he could be vulnerable to an improver. Noble Style has the pedigree to be a top-class horse and if he can improve from his last victory he could cause the upset.

Racing fans all over the world will have one more opportunity to witness the legend Stradivarius as he takes his place alongside seven others in this year’s Lonsdale Cup.

It looks to be a contest between two greats of the staying division as Stradivarius will once again lock horns with rival Trueshan.

The two have flip-flopped victories over one another – and it was Stradivarius who finished a place ahead of Trueshan when the two last raced in the Goodwood Cup just over a month ago.

It’s been a tale of woe for Stradivarius who has come up short in his last two runs, having met traffic problems in both races. Granted a clear passage, there is an argument he could have won both. Jockey Andrea Atzeni will need to do a great steering job to ensure Stradivarius has the best chance of winning.

Trueshan’s disappointing third-place finish in the Goodwood Cup could be attributed to the ground which might have been a bit too firm for him. Rain is due this week and he should have conditions that should help him thrive.

A danger to the top two could be Coltrane who is trained by Andrew Balding. Coltrane ran fourth in the Goodwood Cup but did run with huge credit that day. A front runner, it remains to be seen whether he has the class to outlast his two esteemed rivals but he will certainly make this a stern test.

Looking to cause a stir could be Quickthorn who is trained by Hughie Morrison. An emerging talent in the division, Quickthorn has some great form in the book which includes a Grade 2 victory in France and Grade 3 victory earlier in the season at Sandown.

This will easily be his toughest test to date but at a huge price, he could be the one to back at a price.

If the rain comes Trueshan has to start as the heavy favourite for the race. He has beaten Stradivarius on numerous occasions before and will be confident of turning the tables on his rival here. Stradivarius will be looking to go out with a bang but might find Trueshan a tough nut to crack.