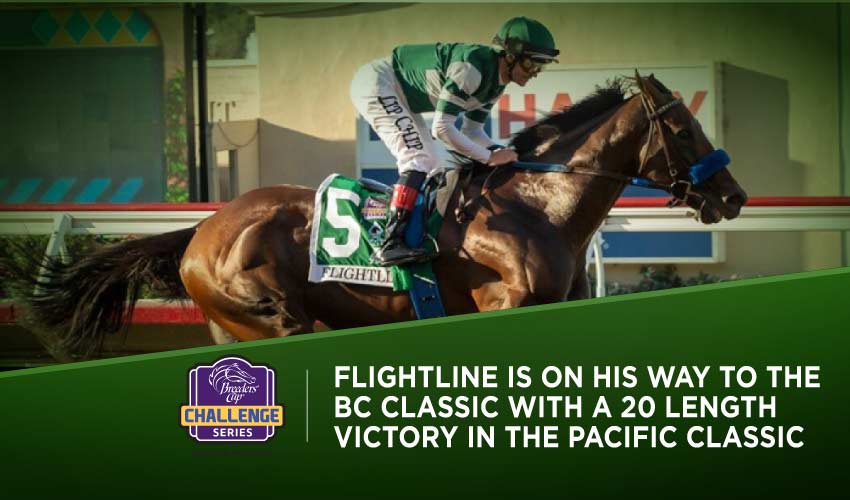 He came, we saw, he conquered. The outstanding Flightline maintained his unbeaten record with an outrageous display of brilliance in the 2022 Pacific Classic at Del Mar on Saturday, thrashing his high-class rivals by 19 and quarter lengths on his first try at a mile and a quarter, stamping himself as probably the best horse in the world.

The unbeaten, probably unbeatable Flightline proved himself the horse of a lifetime at Del Mar on Saturday when he annihilated his rivals in the Pacific Classic, a performance that evoked memories of the legendary Secretariat in its thrilling and absolute dominance.

The four-year-old son of Tapit, the 1-5 favorite, let the rabbit runner Extra Move guide him into the backstretch, but after half a mile jockey Flavien Prat couldn’t hold him any longer and had to let the big horse roll. The race was over, the show had started. With scarcely any urging from the saddle, Flightline simply ran right away from an accomplished field, gearing down through the final sixteenth to win a G1 race from G1 horses by 19 and a quarter lengths in a time of 1:59.28, just 0.17 off the track record.

Dubai World Cup winner Country Grammer was second, Royal Ship was seven lengths further back in third. None of that mattered. What matters is Flightline, who cost $1m as a yearling and is now probably worth at least 50 times as much.

The question before the race was whether he could stretch out to ten furlongs; there’s no arguing with that sort of answer. Flightline is now five-for-five with three G1s, has won his races by an aggregate of 62 and three-quarter lengths, and is a clear favorite for the Breeders’ Cup Classic at Keeneland on November 5. He will not run again before then.

“This horse is so brilliant you have to space his races a little bit apart because he is his own category,” said trainer John Sadler. “I know what’s best for him, which is to build up his energy between one race to the next. We’d all want to see him run more times, but when he runs like this you don’t need to run him more times. Enjoy the ones he runs in.”

It was necessarily anti-climactic, coming in the wake of Flightline. Still, there was plenty of merit in the way that Gold Phoenix made his stakes breakthrough in the Del Mar Handicap, giving trainer Phil D’Amato a joint-record seventh win in the race and earning a paid berth into the Breeders’ Cup Turf.

Gold Phoenix had seven horses in front of him as they exited the turn, but the 7-2 second-choice came flying down the lane under Flavien Prat – having a remarkable afternoon – to get up in the last few jumps and beat favorite Master Piece by a head, with a half-length back to Dicey Mo Chara in third. The stopwatch showed 2:14 and one-half.

Stay tuned for the latest Breeders’ Cup Odds and Horse Racing Results. Don’t forget to Sign-up and get up to a 10% horse rebate. Terms & Conditions here!

Follow us on Social Media for more 2022 Pacific Classic updates!