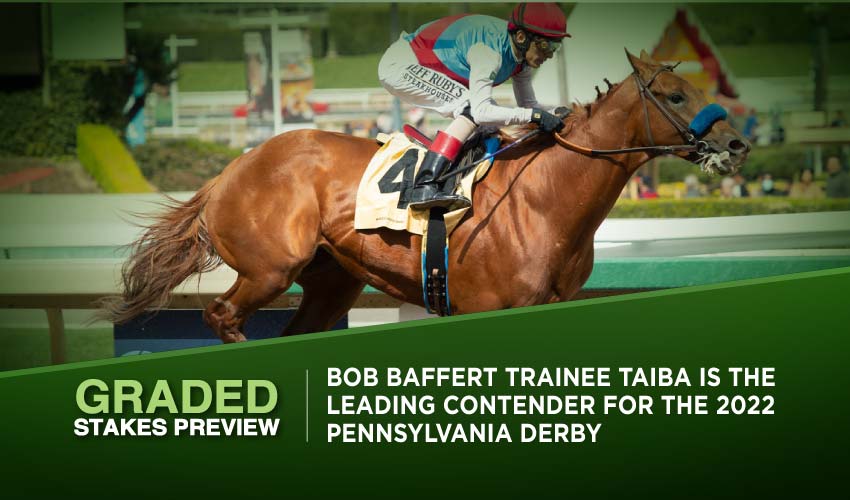 Saturday is the biggest day of the year at Parx Racing, just north of Philadelphia, with two million-dollar G1 contests vying for the spotlight. The Haskell one-two Cyberknife and Taiba lead the line in the 2022 Pennsylvania Derby, backed up by Kentucky Derby third and fourth Zandon and Simplification, while Kentucky Oaks heroine Secret Oath bids to get back in the winning groove in the Cotillion Stakes

The Cotillion, the distaff equivalent of the Penn Derby, also lacks a divisional leader with the absence of Nest, so it instead provides an opening for the Kentucky Oaks winner to get back in the groove after finding Nest much too strong on their last two encounters.

The filly in question is Secret Oath, who was a dominant winner at Churchill Downs in May, pulling two lengths clear of Nest with Shahama and Goddess Of Fire further back. The well has dried up since then, though, with a disappointing fourth place in the G1 Preakness followed by two hammerings at the hands of the brilliant Nest, first in the G1 CCA Oaks and then the G1 Alabama, both at Saratoga.

If the implication that Secret Oath is second-best to only Nest is correct, this race offers her a golden opportunity to bounce back. Alabama third Goddess Of Fire was two lengths further back and has lost eight straight since winning a maiden on debut, but she is nevertheless the shortest-priced of Todd Pletcher’s three representatives. She’s theoretically ahead of the progressive Green Up, who is unbeaten in four this year, most recently in a stakes here over an extended mile when she looked ready to move up, drawing off to win by three and three-quarter lengths with Morning Matcha beaten ten lengths into third.

Further improvement is almost assured and Green Up could be capable of shaking up the big names, while Pletcher’s third-string Shahama has a puncher’s chance after getting the job done in the mile-sixteenth G3 Monmouth Oaks in July, her first victory since coming over from the UAE where she was four-for-four.

West-coast shipper Adare Manor is back with Bob Baffert and making her first appearance for four months, since taking the ‘place’ spot in the G2 Black-Eyed Susan at Pimlico with Morning Matcha back in sixth. She is the likely pace angle and if allowed to get loose on the lead may be tough to reel in.

Society blew her unbeaten record when rolled flat by Nest and Secret Oath in the CCA Oaks but rebounded when dominating the seven-furlong G3 Charles Town Oaks, rolling gate-to-wire to win by six and three-quarter lengths. This requires more but she’s a stakes-winner at today’s distance and is at least firing on all cylinders again, unlike Gerrymander, who looked a potential star when winning the mile-sixteenth G2 Mother Goose at Belmont Park by three lengths from Shahama, but then ran a dull fifth in the Alabama over ten furlongs behind Nest and Secret Oath.

If she’s anywhere near her best, Kentucky Oaks winner SECRET OATH will be very hard to beat without the top-class Nest to deal with.

The current leader of the division – Travers winner Epicenter – is not involved on Saturday, but most of the other big-hitting three-year-old colts will do battle in the Pennsylvania Derby, the undoubted highlight of a stakes-heavy card at Parx Racing.

The best place to start is probably dual G1 winner Cyberknife, who has got the better of two of today’s main rivals on his last two starts. In July at Monmouth Park he rallied hard to catch Taiba and grab the mile-eighth G1 Haskell by a head, and in the G1 Travers over ten furlongs at Saratoga last month he cut out the fractions before being put in his place by Epicenter, going down by five and a quarter lengths but hitting the wire a nose ahead of Kentucky Derby third Zandon, who was closing all the way to the line.

The bones of that form, all noses and heads, suggests that there isn’t much between the trio, and that pace and racing room will probably dictate the outcome.

It’s unlikely that Cyberknife will be able to set the pace with confirmed trailblazer We The People ready to roll from the six-hole, but he showed at Monmouth that he didn’t have to be on the lead. Conversely, Zandon will play his usual waiting game and come with one big run, and with plenty of pace to run at – and without his old nemesis Epicenter in the field – has his best chance of the summer. The still-unexposed Taiba is open to further improvement after just four starts and wouldn’t need to move up much to come out on top. The ‘big three’ dominate the race.

Cyberknife’s barnmate Tawny Port was a length too good for White Abarrio in the mile-eighth G3 Ohio Derby at Thistledown in June, but when he moved back up in grade for the G2 Jim Dandy over a mile-eighth at Saratoga he was only third, a half-length behind Zandon. Tawny Port has never convinced as a G1 runner, and although White Abarrio got his G1 tag in the Florida Derby he is coming here off the worst race of his life, a clunking distant seventh in the Haskell behind Cyberknife and Taiba. He is beginning to look regressive and makes less appeal than his barnmate Skippylongstocking , whose last two starts have been his best.

He ran third in the G1 Belmont, finishing three-quarters of a length ahead of We The People, and then went on to win the G3 West Virginia Derby at Mountaineer over a mile-eighth, stretching his superiority to a length and a half over runner-up We The People, who was in turn four and three-quarter lengths clear of the third Simplification, who was coming off a ten-week break after running fourth in the Kentucky Derby and sixth in the G1 Preakness.

We The People would enter calculations on an off-track but could be little more than a moving target in his role as outrider, while Simplification will be sharper and has a dash of Triple Crown class, but neither are moving forward whereas Skippylongstocking is on the crest of the wave.

A top-class affair in which Kentucky Derby third ZANDON – only a nose behind Cyberknife last time – can turn the tables over this shorter distance.