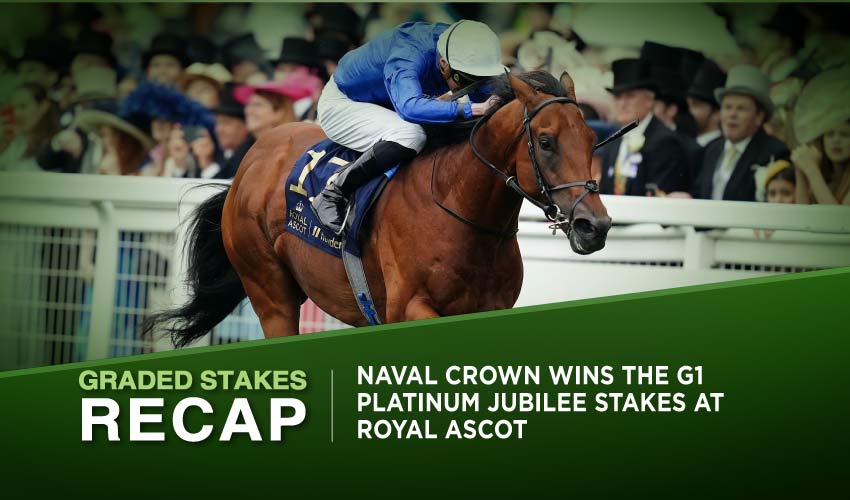 The card on Saturday concluded the Royal Ascot meeting in the United Kingdom. The last of G1 races was the 2022 Platinum Jubilee Stakes for sprinters, where Charlie Appleby celebrated a 1-2 success thanks to his couple of four-year-old – victorious Naval Crown and second Creative Force.

Artorius and Campanelle were both the best of the international stars as they finished third in a dead-heat. Charlie Appleby also won the G3 Jersey Stakes as Noble Truth fulfilled the role of a favorite, while Broome scored the G2 Hardwicke Stakes. Preferred Hurricane Lane had to settle for third place.

This G3 turf race for three-year-old was held at the distance of seven furlongs. The purse of £110,000 attracted a field of fifteen participants, including Noble Truth (4-1). The Charlie Appleby bound bay was a slight favorite of this event and looked quite good throughout as he was eager to go under William Buick, and once the jockey allowed him to take command, nobody passed him by later on. The son of Kingman drew clear from his rivals to score in 1m 26.71s by one length in front of Find (40-1). Dubai Poet (20-1) came home in third.

At first, he landed a Listed, then was gelded, and on Saturday, he delivered his very first Graded win. A length back, outsider Find took second place after a slow start, but his finish was fine and enough to sentence Dubai Poet to third place. Star Girls Aalmal (9-2) ran in fourth, with Rocchigiani (22-1) finishing fifth. The rest of the anticipated contestants didn’t shine this time as Samburu (11-2) was sixth, and Alflaila (11-2) tenth.

The G2 race for three-year-old and older horses welcomed an exciting field of seven contestants; however, the favorite was beaten in this £237,750 event. Covering the distance of a mile and a half, Hurricane Lane (8-11) was expected to return to the track with a bang, but it was six-year-old Broome (6-1) who scored a fine victory.

Under Ryan Moore, the bay soon settled at the front, set the pace, and galloped nicely throughout the whole race. The Aidan O’Brien horse led the field even in the final stretch where Hurricane Lane tried to close on the leader; however, his seasonal debut resulted only in third place as Broome was spectacular on Saturday. When asked to keep away from the rivals, the son of Australia did so willingly and cruised home to a win with the advantage of three and ¼ of a length. Crossing the wire in 2m 30.07s, Broome left Mostahdaf (11-2) in second, with Hurricane Lane being third.

Ryan Moore and Aidan O’Brien have enjoyed a successful festival to which Broome contributed greatly. The bay has been a great servant for the connections, always trying hard in his races, always trying to give as much as he could, while on Saturday, he really caught the eye when bettering Hurricane Lane with ease.

To be fair, the latter just commenced the season after a demanding three-year-old campaign, during which he bagged two Classic victories and finished third in the Epsom Derby and the Prix de l’Arc de Triomphe. Although Mostahdaf also beat him, Hurricane Lane should build on that run to return stronger.

The last G1 of the Royal Ascot meeting was meant for sprinters. Twenty-four of them clashed at the distance of six furlongs on the turf surface while vying for the purse of £1,000,000. After the start, the field packed with international stars split into two parts, and both of them comprised a Godolphin runner. Subsequently, these two sprinters fought for the victory, yet each was on the other side of the field.

Naval Crown (33-1) galloped in the second wave of horses, and as soon as James Doyle urged him forward, the four-year-old bay leaned to the fence and switched to another gear. He did so just in time to better his stable companion Creative Force (12-1), who was the best of the second group running in the middle of the track. In the end, Naval Crown scored by a neck in 1m 12.17s, while Creative Force took second place before Artorius (17-2) and Campanelle (17-2) dead-heating for third.

Charlie Appleby-trained Naval Crown is a son of Dubawi and hasn’t really suggested being a sprinter star until Saturday. Surely, he finished fourth among the elite on two occasions; still, he managed to triumph only in Dubai at the G2 scene, which usually doesn’t mean much in Europe. However, Naval Crown ran a blinder together with Creative Force, who, unlike his colleague, spent the race in the rear and relied on a powerful move in the closing stages.

The Platinum Jubilee Stakes thus stayed in the United Kingdom as none of the international champs outshined the locals. Australian hope Artorius stayed on bravely in the last furlong to snatch up a third place alongside Campanelle, representing the US, who put on a gutsy performance to keep the third place as well. Sacred (15-2) was fifth, while many well-known horses didn’t show much as A Case Of You (22-1) was 17th, Japanese raider Grenadier Guards (50-1) finished 19th and the preferred Australian colt, Home Affairs (5-2), was 20th.

Follow us on Social Media for 2022 Platinum Jubilee Stakes at Royal Ascot updates!