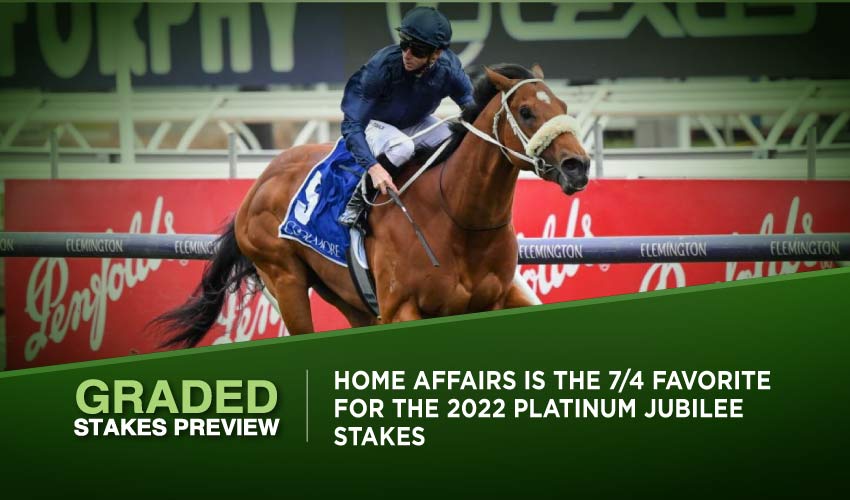 On Saturday, the last G1 of the Royal Ascot will be held over the distance of six furlongs. An international field will line up in the 2022 Platinum Jubilee Stakes that was renamed from the Golden Jubilee after The Queen celebrated the Platinum one, while it seems that Australia could also bag this sprint thanks to their raider Home Affairs. In the G3 Jersey Stakes, Noble Truth is preferred among three-year-old, and a superstar Hurricane Lane looks like a banker for the G2 Hardwick Stakes.

Three-year-olds will clash in this G3 turf race at the distance of seven furlongs. The purse of £110,000 attracted several talented participants, especially Charlie Appleby bound Noble Truth (9-2). The son of Kingman scored a Listed as a two-year-old and also ran in second in the G1 Prix Jean-Luc Lagardere behind Angel Bleu. Indeed, he failed to show anything of interest in Riyadh, but as soon as he returned to the turf surface, he added a second Listed success to his record when running down the competition in Newmarket by six lengths. Subsequently, he was gelded, and therefore, another boost in his performance could be expected.

Any of his rivals could build one of their previous starts and win this renewal as the field is packed with contestants, winning smaller races and boasting some talent at it. For example, Monaadah (15-2) bagged two victories on the all-weather track while looking smart enough to score even among Saturday rivals. He’s unbeaten in three starts like Samburu (8-1), trained by John and Thady Gosden. The son of Kingman didn’t win by far any of his runs but always did enough to prevail, including his attempt in the Class 3 race in May.

Alflaila (8-1) wasn’t anything special as a junior, but his only 2022 performance was victorious when bettering the competition of a Class 2 handicap. Despite carrying the biggest weight, he triumphed decisively, and on Saturday, he could be the most serious threat to the favorite. The last to talk about it is Star Girls Aalmal (8-1) trained by Henry de Bromhead, a trainer who specializes in jump racing, yet his filly bettered some fine rivals on her seasonal debut and last time out, her fourth place in the Irish 1000 Guineas wasn’t that bad.

Our pick for the Jersey Stakes is Noble Truth due to his impressive victory in a Listed company. He should be able to also score at the Graded level.

The G2 turf race is open to four-year-old and older horses who will cover the distance of a mile and a half. The purse of £237,750 lured in the last year’s Classic winner Hurricane Lane (4-7). The Charlie Appleby bound chestnut didn’t win only two of his eight career outings as he finished third both in the Epsom Derby and Prix de l’Arc de Triomphe in 2021; however, he bagged the Irish Derby, the Grand Prix de Paris, and St Leger. This outstanding son of Frankel is about to enter the ongoing season and could be disadvantaged by that on Saturday; still, he is so classy he should win nevertheless.

Third Realm (17-2) finished the last year’s Epsom Derby in the fifth position, upon which he placed at the G3 stage and in 2022, he scored a Listed by six lengths. It was a brilliant performance of this four-year-old colt, but when faced with Hurricane Line, his maximum will probably be snatching up a place here. Basically, the only participant of the Hardwick Stakes who has ever suggested a similar class the favorite did, is Broome (6-1). The six-year-old trained by Aidan O’Brien has been a great servant for the connection; however, he’s more of a G2 horse today.

Six-year-old Solid Stone (10-1) climbed up from handicaps to the Graded company in the 2021 season, which he concluded with a couple of G3 triumphs. In 2022, he failed in Riyadh but scored his premiere G2 victory in Chester. The field is quite competitive behind Hurricane Lane; therefore, we also mention five-year-old Layfayette (12-1), who is unbeaten in three seasonal outings. Last time out, he bagged a G2 win, and even though he doesn’t look like a G1 horse, he could play a decent role in this company.

Our pick for the Hardwick Stakes must be Hurricane Lane. The chestnut colt is an absolute superstar for the connections and should enjoy a successful seasonal reappearance here.

The last G1 race of the whole festival attracted a stellar international field. On the turf surface, 27 sprinters will cover the distance of six furlongs and fight for the purse of £1,000,000. After Nature Strip destroyed the G1 competition on Tuesday, another Australian raider is trusted to be capable of something similar on Saturday – three-year-old Home Affairs (17-10) bagged a rich G2 race for two-year-olds in the past, then scored his first G1 in October over six furlongs, and in February, the bay bettered Nature Strip in the Black Caviar Lightning. Last time out, he was only ninth among the elite, but as it was a handicap, Home Affairs carried the biggest weight, which could’ve affected his performance.

Besides Chris Waller’s charge, also Artorius (25-2) vies for another Royal Ascot glory for Australia as this Anthony and San Freedman bound colt is a G1 winner, too. He achieved his most treasured win in February 2021, and despite the fact he hasn’t won since, he’s a decent horse capable of running fine over trips from five to eight furlongs. The Americans have been quite unlucky during the meeting, and four-year-old Campanelle (13-2) might break the duck. The Wesley Ward trained filly achieved two G1 wins in Europe, most notably the G1 Commonwealth Cup in 2021, while in 2022, she travels to Ascot with an easy Listed victory she recorded in April.

Regarding the Irish horses, Adrian McGuinness relies on four-year-old A Case Of You (15-1) who prevailed at the G1 stage in France and Dubai, while Creative Force (16-2) represents the biggest chance of the locals. Trained by Charlie Appleby, the four-year-old chestnut triumphed in the last year’s G1 British Championship Sprint Stakes but didn’t show anything in Dubai. Creative Force is a beast of a sprinter when faced with at least good to soft ground. On anything firmer, he is prone to disappoint. Sacred (8-1) is also considered.

Our pick for the Platinum Jubilee Stakes is Home Affairs because it’s difficult to forget how his fellow Australian Nature Strip didn’t give his rivals a chance. Campanelle might catch him off guard him, though.

Follow us on Social Media for 2022 Platinum Jubilee Stakes updates!