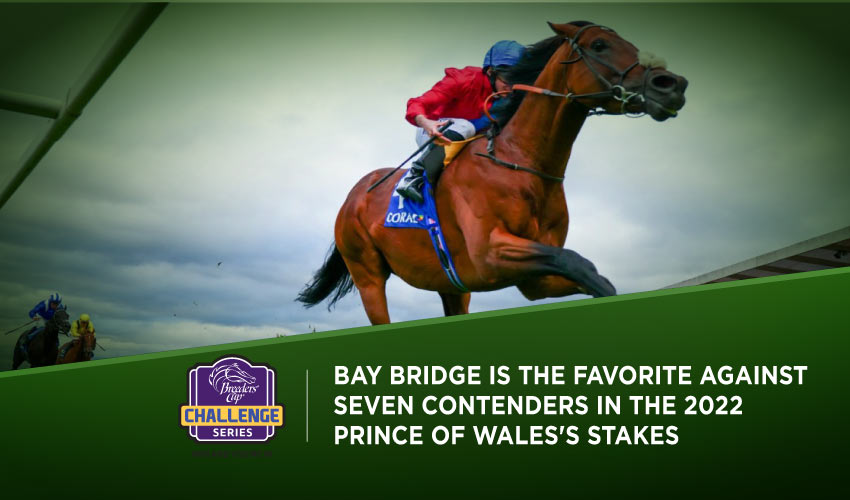 With Royal Ascot in full swing, Day 2 of the meeting is headlined by the 2022 Prince of Wales Stakes. The only Group One race of the day, the race will be run over a distance of one mile and two furlongs. Eight horses will line up for their shot at the first-place prize of £397,000.

One of the most prestigious races of the entire Royal Ascot card, the Prince of Wales Stakes will look to determine who is the best horse over a distance of one mile and two furlongs.

At the top of the betting is the Sir Michael Stoute trained Bay Bridge. Stoute’s yard is in top form and will head into this year’s Royal Ascot buoyed by Desert Crown’s win in this year’s Derby. This is a race that Stoute has enjoyed tremendous success in having won two of the last four editions.

It’s easy to see why Bay Bridge is at the top of the market. He heads into this race having won his last five races which includes an emphatic win in his only run of the season so far. Although the Brigadier Gerard Stakes was only a Group 3 race, he did it in the style of a good horse winning the race comfortably by a distance of four lengths.

A typical Stoute horse, he has just got better and better with each run. With a relentless galloping style, he could have far too much class for his rivals.

Shahryar rose to prominence when he sprung a surprise by winning the Group 1 Sheema Classic. Shahryar was all class as he recorded easily the best win of his career beating some quality horses in Hukum, Yibir and Alenquer. That’s some pretty decent form and he will certainly make a race of things.

State of Rest from the Joseph O’Brien yard is the third favorite for the race and he too brings some Group 1 form into the race having won the Prix Ganay last month. He did it nicely that day producing a tough and battling performance. The strength of that race can be slightly questioned as he could only back that performance up with a third place finish in the Irish Gold Cup. An uncompromising galloper he really could give Bay Bridge something to think about.

Lord North could be the value play of the race with the John and Thady Gosden trained horse bringing some top level form having won the Group 1 Dubai Turf earlier in the season. He has some excellent Ascot form having won this race back in 2020. He won the race impressively that day and if he can reproduce that form here, he could be a real contender.

Although the betting has Bay Bridge as the overwhelming favorite, this race certainly looks to be competitive. State of Rest could be the play. A Group 1 winner already, his third in the Irish Gold Cup was still a decent showing and if he runs to his best he could be a tough nut to crack.

Follow us on Social Media for 2022 Prince of Wales Stakes updates!