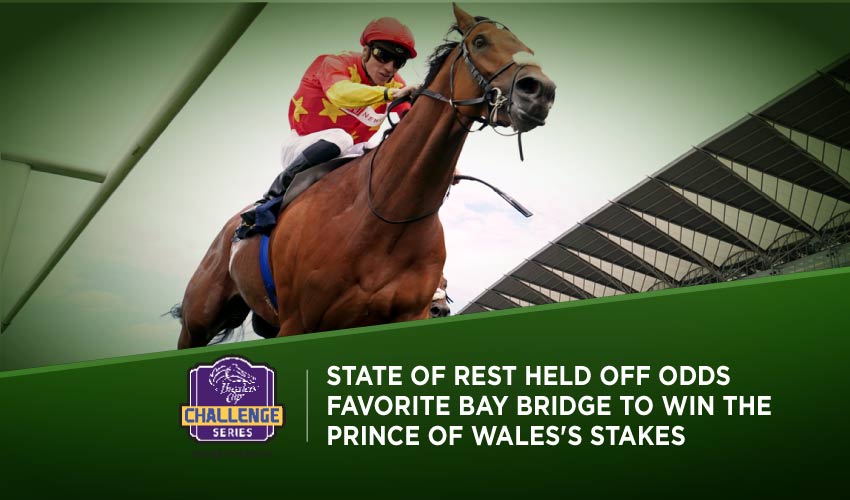 With just five runners, the betting for the race was wide open but it was the Michael Stoute-trained Bay Bridge that was backed into favoritism. Backers of Bay Bridge had every right to feel confident. Stoute has his stable in fine form having won the Derby just a few weeks ago. He has also won two of the last four editions of this race.

Bay Bridge headed into the race having had just one start this season which came in the Grade 3 Brigadier General Stakes at Sandown. An impressive winner that day, many believed that like so many Stoute horses have proved in the past, he would be able to take the huge step up in class with ease. However, with the rise in grade proving to be a slight unknown, there was value to be found elsewhere.

In our race preview, we selected State of Rest to win the race. A multiple Group One-winning horse, he entered the race after finishing third in the Irish Gold Cup. Despite not winning last time out, that third-place finish still represented some terrific form and at a big price of +500, he was definitely the value play of the race.

As the gates flew open it was State of Rest who was happy to lead from the front and dictate the early pace. Drama was in behind as Lord North muffed the start badly, losing several lengths to his rivals. A mistake from which he would never recover from.

As the race unfolded the rest of the field were happy for State of Rest to have an easy lead. The pace was sedate until the field turned for home.

With just two furlongs to race, the highly touted Japanese horse Shahryar was the first to crack and folded back tamely through the field. All eyes were drawn out wide to Bay Bridge who was making his challenge. Looking poised and ready to kick on, the acceleration just wasn’t there and despite Ryan Moore’s urgings the horse never looked likely to get past State of Rest.

As two runners hit the line it was State of Rest who had won, winning by just over a length.

The win was a first at the Royal meeting for former jockey Joseph O’Brien. O’Brien can now add Royal Ascot to his list of impressive global successes.

For Bay Bridge it remains to be seen as to what level he can successfully operate in, but what we do know is that State of Rest is one tough, classy horse.

Follow us on Social Media for 2022 Prince of Wales Stakes Recap updates!