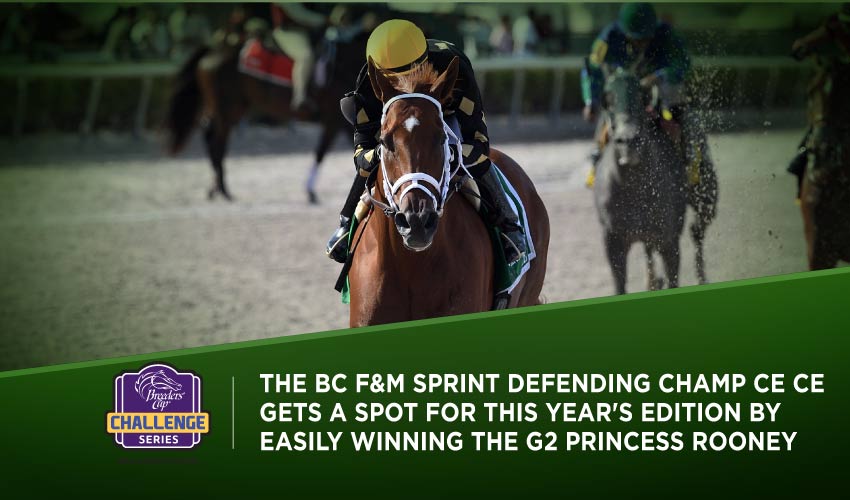 The road to this year’s Breeders cup has begun with the Gulfstream bumper ‘Summit of Speed’ meeting. The card was headlined by the 2022 Princess Rooney Invitational in which the winner would receive direct entry into the Filly’s and Mares Sprint at the Breeders’ Cup. Also on the card was the Smile Stakes, one of Florida’s most prestigious sprint races. Here we recap the very best of the action.

Ce Ce, the defending Filly’s and Mare Champion punched her ticket to the dance at this year’s Breeders’ Cup following a dominant win in this year’s Princess Rooney. It was the mares’ second straight Princess Rooney and she did it with the minimum amount of fuss.

A tactical speed runner, Ce Ce sat off the speed tracking the lead which was set by Make Mischief. As the runners blazed up the back straight, it was clear that Make Mischief had gone off too fast and was flagging. Ce Ce under Victor Espinoza moved alongside the long-time leader, and as they rounded the home turn, powered clear.

Tracking Ce Ce all the time was Spirit Wind and with a furlong and a half to go, the race looked to be in the balance. But Ce Ce showed why she is a Breeders’ Cup winner and in the last furlong, she kicked into another gear and beat the field by three widening lengths.

There are bigger tests to come, but Ce Ce is back on track for another crack at this year’s Breeders’ Cup.

The fast and furious Smile Stakes was won by the Jorge Delgado trained Willy Boi. A four-year-old, this was Willy Boi’s first graded win and a crack at the Breeders’ Cup Sprint is now a realistic target.

In one of Florida’s most prestigious races, the race was headlined by favorite Drain the Clock. A five-time winner at Gulfstream, Drain the Clock was the only Grade One winner in the field.

Raced over six furlongs, the action was frenetic and fast with a long shot for the race Yes I’m a Beast setting the early fractions. Nestled in behind was Gatsby with the smooth traveling Drain the Clock tracking nicely behind. As the runners made their way to the home turn it was Drain the Clock who made his move and looked poised to power home.

However, the danger was in behind, Willy Boi’s jockey Chantal Sutherland tracked Drain the Clock’s every move and as the horses rounded the final turn it was clear that it was Willy Boi who was traveling much the better.

As the runners hit the home straight Willy Boi had too much pace for his much higher regarded rival and looked like the only winner.

Pudding at a huge price ran a great race to finish a length behind in second with Drain the Clock completing his American reappearance in a distant third.

As a result of winning the Smile, Willy Boi will now get a $50,000 discount on the Breeders Cup Sprint due to be held later this year.

Stay tuned for the latest Breeders’ Cup Odds. Check out the World’s major Racetrack entries, horse racing results and don’t forget to Sign-up and get up to a 10% horse rebate. We offer the best promotion!

Follow us on Social Media for 2022 Princess Rooney Invitational updates!