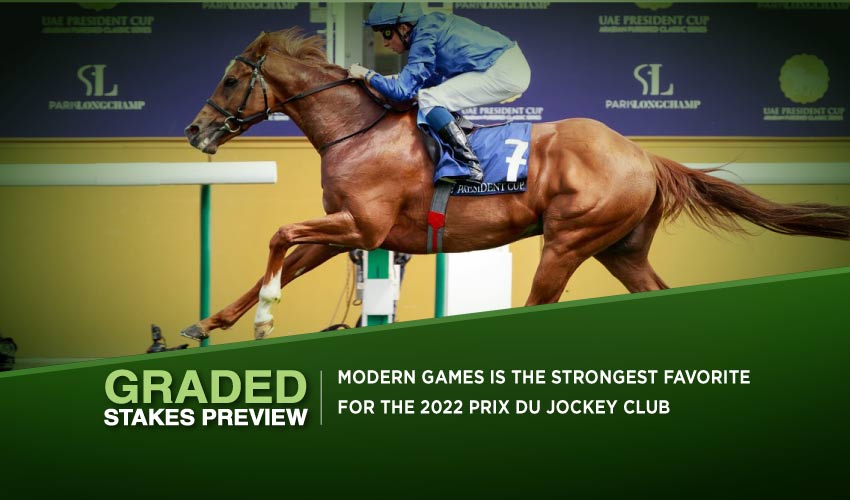 The third Classic race of the French Flat season takes place on Sunday at the Chantilly Race Course. The 2022 Prix du Jockey Club attracted a field of fifteen three-year-olds, including the local 2000 Guineas victor, Modern Games, trained by Charlie Appleby. The chestnut is a favorite here, but the French colts look ready to take on him once again.

This G1 turf race is also known as the French Derby, yet unlike the Epsom Derby, it’s run over a shorter distance of a mile and two and a half furlongs. Obviously, the event is open only to three-year-olds (no geldings), with the purse of €1,500,000 being up for grabs.

As in the local 2000 Guineas, the leading chance again comes from the United Kingdom because Charlie Appleby sends in Modern Games. The Godolphin-owned chestnut scored his premiere G1 in 2021 when running down the Breeders’ Cup Juvenile Turf competition, and added another big triumph in the mentioned French Classic. Modern Games entered the new season in a decisive style as he always galloped near the front, then took command, and didn’t allow anybody to challenge him.

This time, he’s about to try a bit longer trip; still, the son of Dubawi should handle it, albeit he’s really not a proper stayer. There are other trainers from the British Isles interested in achieving the Classic glory, yet the most serious rivals for Modern Games seem to be representing the locals, even though the colours Ancient Rome sports are mostly tied with Ireland.

The Andre Fabre bound colt has shown tremendous talent as a two-year-old when bagging three victories, including one at the G3 scene, and then he placed twice among the G1 company. His seasonal debut was quite below par as he finished only sixth in the trial for the French 2000 Guineas; however, he improved the impression in the Classic itself by securing fourth place.

With two outings under his belt in 2022, he should draw on them once again with his form possibly peaking on Sunday, and therefore, Ancient Rome could be the leading threat for the favourite. The distance should suit him quite well.

At first sight, the race card of the 2022 Prix du Jockey Club catches the eye by the number of runners Jean-Claude Rouget relies on here; moreover, none of the quartet is entire without a chance. Still, we picked two colt that we perceive as the most interesting as both Vadeni and Al Hakeem scored respective trials for the Sunday event, and both did so with ease.

Their claims look almost the same here, while we would just slightly prefer Vadeni due to his more explosive turn-of-foot, which comes in handy regarding the large field and a possible lack of space in the final stretch. The last to mention is Onesto, who delivered a commanding performance in the G2 Prix Greffulhe over Sunday’s trip, so his only drawback could be insufficient class.

Ancient Rome as he’s classy, and talented, and he should appreciate the distance here.