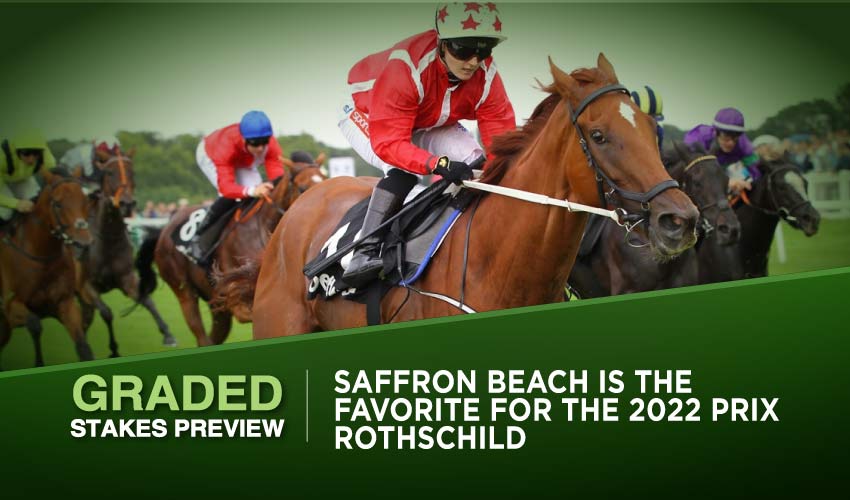 On Tuesday, some high-class action will happen at the Deauville Race Course in France as it hosts the 2022 Prix Rothschild for fillies and mares. Although the field of seven runners boasts interesting names, just two of them should fight for the victory – four-year-old Saffron Beach and three-year-old Tenebrism. Still, neither of them is trained in France as the former comes from the UK, with the latter is trained in Ireland.

The G1 turf is the pinnacle of the meeting and is open to three-year-old and older fillies and mares. Seven of them will cover the distance of a mile while vying for the purse of €300,000.

The leading chance travels from the United Kingdom as Saffron Beach (2-1) is trained there by Jane Chapple-Hyam. Achieving a G3 victory as a two-year-old, she then went on to finish second in the 1000 Guineas, and at the end of the season, Saffron Beach scored her premiere G1 win in the Sun Chariot Stakes. The outstanding miler showed great effort also in Dubai, where she was fourth in the G1 Dubai Turf, and in her return to British soil, she didn’t hesitate to storm home in the G2 Duke of Cambridge Stakes. By no means the daughter of New Bay is ready to take on the fiercer competition and to even add the second G1 victory to her resume.

The biggest rival for the favorite should be sought among three-year-olds as Tenebrism (6-4) returned to the winning ways recently in a fine fashion. The Aidan O’Brien bound filly scored the G1 Cheveley Park Stakes; however, she didn’t show anything like that in the first two starts of 2022. Subsequently, she was pointed to a seven furlong-long Prix Jean Prat in Deauville, where Tenebrism finally displayed her class to score it, bettering both winners of French Classic with ease as neither Modern Games nor Mangoustine impacted the race. Therefore, Tenebrism looks eager to make it up for her lacklustre beginning of the season; still, she needs to confirm she can also perform over the mile trip.

The only other three-year-old in the field is Malavath (18-1), trained by Francis-Henri Graffard, who’s been disappointing throughout this season. In three starts, she hadn’t suggested regaining the form she displayed as a junior when she won a G2 and finished second in the G1 Breeders’ Cup Juvenile Fillies Turf.

The first mentioned couple of fillies should fight for the victory, with the rest of the runners being place contenders at best. Pearls Galore (7-1) looks the most appealing as she’s been quite consistent at the Graded stage, bagging two G3s last year, while in 2022, she triumphed in the G2 Lanwades Stud Stakes over a mile. Last time out, Pearls Galore ran a good race in defeat, finishing second in the G2 Minstrel Stakes, only behind Order of Australia. Sibila Spain (15-1) might defy the odds as she is a G2 victress; however, Goldistyle (45-2) and Kennelia (50-1) are true outsiders.

Our pick for the Prix Rothschild is SAFFRON BEACH, who needs to overcome the weight disadvantage over three-year-old Tenebrism, but unlike her, the favorite has proven herself over the distance and in such a company.

Follow us on Social Media for more 2022 Prix Rothschild updates!