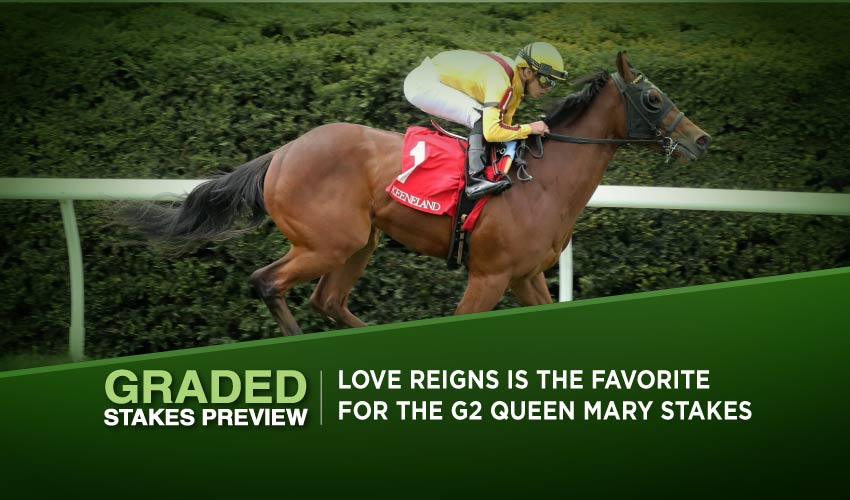 The Royal Ascot continues on Wednesday with a high-quality packed card. In this article, we’ll have a look at three G2 turf races. At first, two-year-old fillies line up for the 2022 Queen Mary Stakes, where Wesley Ward can enhance his record as he’s already prepared four winners of the race. This time, he relies on Love Reigns, a sovereign victress of her debut. Three-year-olds then meet in the Queen’s Vase that could serve as a St Leger trial for some participants, among which we find a highly anticipated couple of colts trained by Charlie Appleby, Hafit, and Nahanni. Finally, four-year-old fillies and older mares head into the Duke of Cambridge Stakes over a mile, with G1 scorers Mother Earth and Saffron Beach promising a mouth-watering clash.

The five furlongs-long turf race is open only to two-year-old fillies who will compete for the purse of £115,000. In this G2, American trainer Wesley Ward has a brilliant record, and therefore it’s no wonder his trainee is the leading chance here.

The Ireland-bred Love Reigns (3-1) has one outing under her belt as she commenced her career with a commanding victory in an April maiden at the Keeneland Race Course. Back then, she bolted away from the gate, settled at the front, and subsequently drew clear from her rivals to score by almost ten lengths.

It was, indeed, a beautiful display of speed, and with Irad Ortiz aboard again, Love Reigns could also reign at the Royal Ascot meeting. She definitely seems capable of that, while she’ll be accompanied on her British mission by another US-bound filly, Grand Oak (20-1).

Trained by George Arnold III., she broke her maiden at the second attempt in May when she also led from start to finish, bagging the triumph by four and ¼ of a length. Love Reigns looks more exciting here; still, it wouldn’t be much surprised if Grand Oak runs well, too.

Regarding the local contestants, trainer Karl Burke sends a Dramatised (5-1), an easy winner of her debut and quite a talented specimen.

The bay filly hit the track in late April to secure success by four lengths at Newmarket and looks every ounce as a proper, quick two-year-old ready to compete in the 2022 Queen Mary Stakes. There is a Listed victress in the field; the David O’Meara bound Maria Branwell (7-1) who drew on her win in a maiden to score among a better competition in Sandown. The last to mention here is Katey Konent (9-1) trained by Clive Cox as her pedigree shouts speed, which she’s proven in both her outings in a span of ten days.

After bagging her debut, she went on to put on a great performance in Windsor, winning by more than four lengths back then. Such a tough race ahead could be too much for a two-year-old filly and even if she handled it, she needs to step up her game on Wednesday. Yet she looks talented.

Our free betting pick for this competitive renewal of Queen Mary Stakes is Love Reigns due to the outstanding record of Wesley Ward’s charges here; moreover, the filly just has the right profile for the race.

In this G2, over a mile and six furlongs, three-year-olds will vie for the purse of £262,500. The long turf race should give us some hints towards St Leger and how these colts might handle even more extended trips. Charlie Appleby has quite a strong hand here, given he supplemented Nahanni (13-2) to the race.

The son of Frankel has profiled himself as a true stayer since the start of his career in January, bagging two wins at the distance of a mile and a half, upon which he was sent to a mile and a quarter in Epsom.

At the Listed scene, he prevailed by a neck and fulfilled the role of a favorite, yet it was apparent he’d appreciate a longer trip. He got that in the Epsom Derby; however, the quality of the field was just too much for him, which resulted in Nahanni crossing the wire in seventh.

On Wednesday, he should benefit from the distance but being a Frankel colt, it’s a question of how far he can go. Hafit (15-4) accompanies his stable-mate to the Queen’s Vase, and he might be classier than Nahanni, yet he hasn’t properly shown that. In other words, there’s always something about him, and he’s never far away from striking gold like when running in third in a Listed in May. It’s possible he simply needs another furlong to shine, and on Wednesday, he’ll finally score a big one.

None of the remaining contestants looks capable of running the mentioned duo down, with a slight exception in Eldar Eldarov (17-2), trained by Roger Varian. The Dubawi colt has won both of his outings, and despite the fact they were in Class 5, he won smoothly and has the potential to succeed in a better competition. Whether he’s classy enough to threaten Hafit and Nahanni that’s a question he needs to answer in this race. Al Qareem (12-1) is another place contender as he may continue his progress here.

After succeeding in Class 4 and 3, the Karl Burke bound colt looks interesting. Perfect Alibi (12-1) is the last to mention, as John and Thady Gosden-trained contestants are often capable of huge leaps between categories. Although this filly is only a maiden winner, the daughter of Le Havre should benefit from the distance, and some class is definitely about her as well.

Our free betting pick for the Queen’s Vase is Hafit. Indeed, he hasn’t been a star for his trainer so far, but there’s potential hidden in him, which he should be able to show off in this rather weak renewal of the race.

Four-year-old fillies and older mares will face off in this G2 turf race over a mile. The purse of £175,000 attracted two outstanding performers, Mother Earth (9-4) and Saffron Beach (5-2). These two fillies have already met on three occasions, while the former twice bettered the latter.

Mother Earth entered the season of 2021 with a bang in the 1000 Guineas over Saffron Beach, and subsequently, she ran in second in the Falmouth Stakes, where Saffron Beach managed only eleventh place. Their last clash occurred in the G1 Sun Chariot Stakes in October, resulting in Saffron Beach securing her premiere G1 victory, and this time over Mother Earth.

This Aidan O’Brien filly had demanding campaigns as a two-year-old and three-year-old, recording 18 starts in total, and even though she usually placed or won, it seems that whenever she bumps into less raced rivals, it just shows.

Therefore, it’s no wonder she scored her seasonal debut in a G3 company but utterly failed to shine in the G1 Lockinge Stakes in May despite the fact her class should’ve been enough to snatch a fine place. She drops to the G2 stage and among fillies and mares, which definitely goes into her stride, but the question is how she handles Saffron Beach, which has run only in half the races Mother Earth did.

As a junior, the chestnut filly trained by Jane Chapple-Hyam scored a G3 win, and in 2021, she joined the elite of three-year-old fillies. She recorded two flops, indeed, as the mile and a half was too much for her in the Epsom Oaks, and the Falmouth Stakes were luckless for her, but in her sole 2022 outing, Saffron Beach delivered a good effort in the G1 Dubai Turf.

Back then, she was fourth in the international company. Although she hasn’t hit the track since, bettering Mother Earth once again won’t come as a surprise to her.

Bashkirova (5-1) could be the third chance here, thanks to her promising victory in a G3 race over a mile and a half of a furlong. French trainer Christopher Head then relies on Sibila Spain (8-1).

The bay filly stuck to the middle distances as a two-year-old, collecting two-fourth places among the elite, while in 2022, she was shortened to a mile. Suddenly, she bolted up to score her premiere G2 win in the Prix du Muguet.

The last to mention is Germany-bound Novemba (8-1), who ran fourth in the last year’s G1 Coronation Stakes. Her 2022 performance wasn’t a stellar one but she’s proven she doesn’t mind traveling to the United Kingdom and competing with the elite here.

Our free horse betting pick for the Duke of Cambridge Stakes is Saffron Beach, as she’s consistent and classy enough to strike gold here. Both Sibila Spain and Novemba look interesting as well.